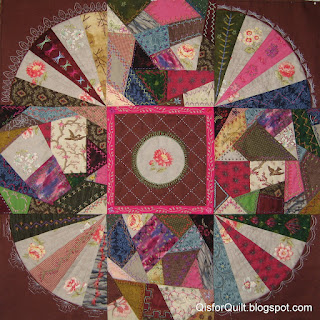 Almost but not quite done! I still have some embroidery to do on this crazy quilt wallhanging and then the finish work. I'm on a mission to get it completed this weekend. Its about 24 inches square, foundation pieced by machine but totally hand embroidered. Most of the fabrics came from my stash but I did purchase a few.
There's so much more I could add to this wallhanging but by the time I've got the backing, binding, sleeve and label sewn on tomorrow, there will be approximately 100 hours of work in it.
Time to move on to my quilt show quilts!
Posted by Mayleen at 9:07 PM 5 comments: 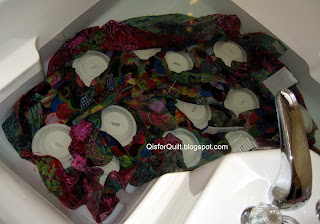 I'm trying Vicki's advice and soaking my quilt top for 12 hours in hot water with Dawn dishwashing liquid and Shout Color Catchers. This picture was taken during the rinse and I'm now repeating the hot water/detergent soak. I'll let you know later how it goes!
If you're wondering why my old saucers are also in the water, they're holding down the quilt top so its completely submerged. I'm also realizing all over again that a 50+ year old body cannot reach and stretch like it used to. Very sore muscles today but at least I didn't fall into the tub!
Posted by Mayleen at 5:55 PM 5 comments:

Its been a l-o-n-g week for me and its not over yet. Too many commitments, expectations from other people, things going wrong or not as expected, disappointing news, some minor vandalism at our house, etc.
I've been struggling with getting my clamshell quilt pinned on my mom's old quilting frame so I could threadbaste it. I had a goal of beginning to big stitch quilt it next week which won't be happening now.
After several tries, I finally got it on straight (maybe) and started basting for the third time when I found stains. If you look closely, you can see gray stains on the light pink and orange clamshells. I can only guess that the prewashed navy striped fabric next to it bled during the cold water soak to remove the basting glue. 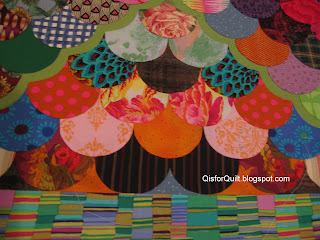 I'm going to finish the basting and then I think I have two options but I'm open to any suggestions so feel free to let me know what you'd do!
First, I could pick out the two pink clamshells and replace them. That would be a lot of work and I hate to pick out and repair things but it might be better than option two.
Soaking the quilt in Synthropol is the other option. I've never used this product before and I'm concerned about soaking the quilt in hot water which Synthropol apparently works best in. Will it cause the bright colors to fade? Do I want to take the risk? This quilt is entered into the Common Threads quilt show.
I've had a few other quilty things go wrong or maybe just not as I wanted them to but so far, I think the crazy quilt donation wallhanging is turning out well. I should have started this last year but ... ! Never enough time for all the projects I want to do. I don't think you can see the stitching very well but I'm about 1/3 finished. 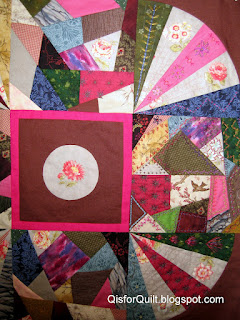 I was trying to make it less bright but as you can see, that didn't work! Already many offers for it but it will be part of a silent auction at "Women In Conversation", a Mennonite women's ministry event coming up in April. I even wish I could buy it!
PS -Denise if you're reading this, don't worry, it will be finished in time!
Posted by Mayleen at 8:33 AM 5 comments:

In my last post, I told you about not being able to piece the Y-seams (actually V-seams) accurately by machine or hand and had resorted to hand appliqueing them. One night after only 4 1/2 hours of sleep, I decided to try sewing them by machine again and it worked! Hate to think I will have to give up sleep to get good quilting results but it worked this time. 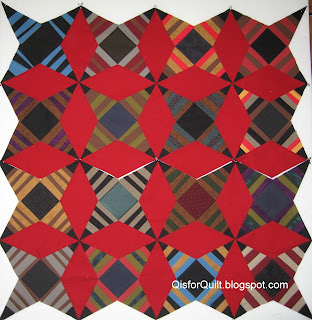 This is the Rocky Road to Kansas wallhanging so far. As you can see, its not totally pieced together yet and I'm planning to take apart the horizontal rows again today. Why? 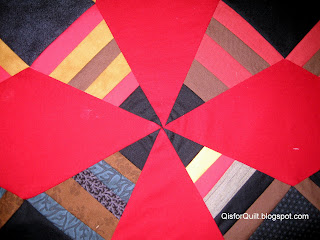 Because I don't like what's happening in the picture above. Points not matching or cut off and wrinkles. There are lots of seams coming together there creating bulk which isn't helping.

When this is finally pieced, I plan to embroider the seams with crazy quilt stitches and embroider in the middle squares. My question to you is, is this a crazy quilt or an embroidered quilt?

On another note - Its raining! Our winter has been quite dry, brown and warm here so the rain is very welcome. I usually get a lot of sewing/quilting done on rainy days so it would be OK with me if it rained for the next few days!
Posted by Mayleen at 6:40 AM 4 comments:

No pictures for posterity. Just believe me, my Y-seams are bad, bad, bad. I read how to do it, watched U-tube videos and even understand how it should work. Still bad, bad, bad. Tonight I ripped out what I sewed in this morning. Just a little frustrated because I've been working on the Rocky Road to Kansas quilt most of the week. Its keeping me from working on Houses from Scraps and from my hexagon quilt too. Time to change the subject before I get even more frustrated!

My Pfaff sewing machine got a transplant. I did not burn out the motor as I thought. The electronics in the foot pedal went bad and instead of waiting for a new pedal to be delivered, the shop replaced it with a used one (for now). After a tune up and another minor part replacement, my sewing machine is back to sewing. Meanwhile, I've sewn on a Viking and a new Pfaff and would like to try a Bernina before I make a decision about buying a new machine.

I just finished hand piecing the backing for the clamshell quilt and next up will be layering and basting it. This will be the first time I've ever thread basted a quilt, have always used safety pins. I'm not looking forward to leaning over the quilt to thread baste even though I'll be working on a table. Also, the orange perle cotton to utility stitch the quilt has arrived so it just moved up on my "To Do" list.

Speaking of my "To Do" list, I'm not going to let those Y-seams get the best of me. Maybe tonight I'll dream about how to make them perfect! Probably not. LOL
Posted by Mayleen at 8:32 PM 3 comments: