As promised, here are some photos of Phebe now that she's quilted! Unfortunately, the photos from my camera didn't turn out very well so most of these photos were taken with my cell phone. The colors are a little brighter and there is some distortion too. Also, I'm not sure if the beautiful quilting will show up very well so I'm going to link to the machine quilter's blog at the end of this post. Please click on the individual photos for a better look. Enjoy! 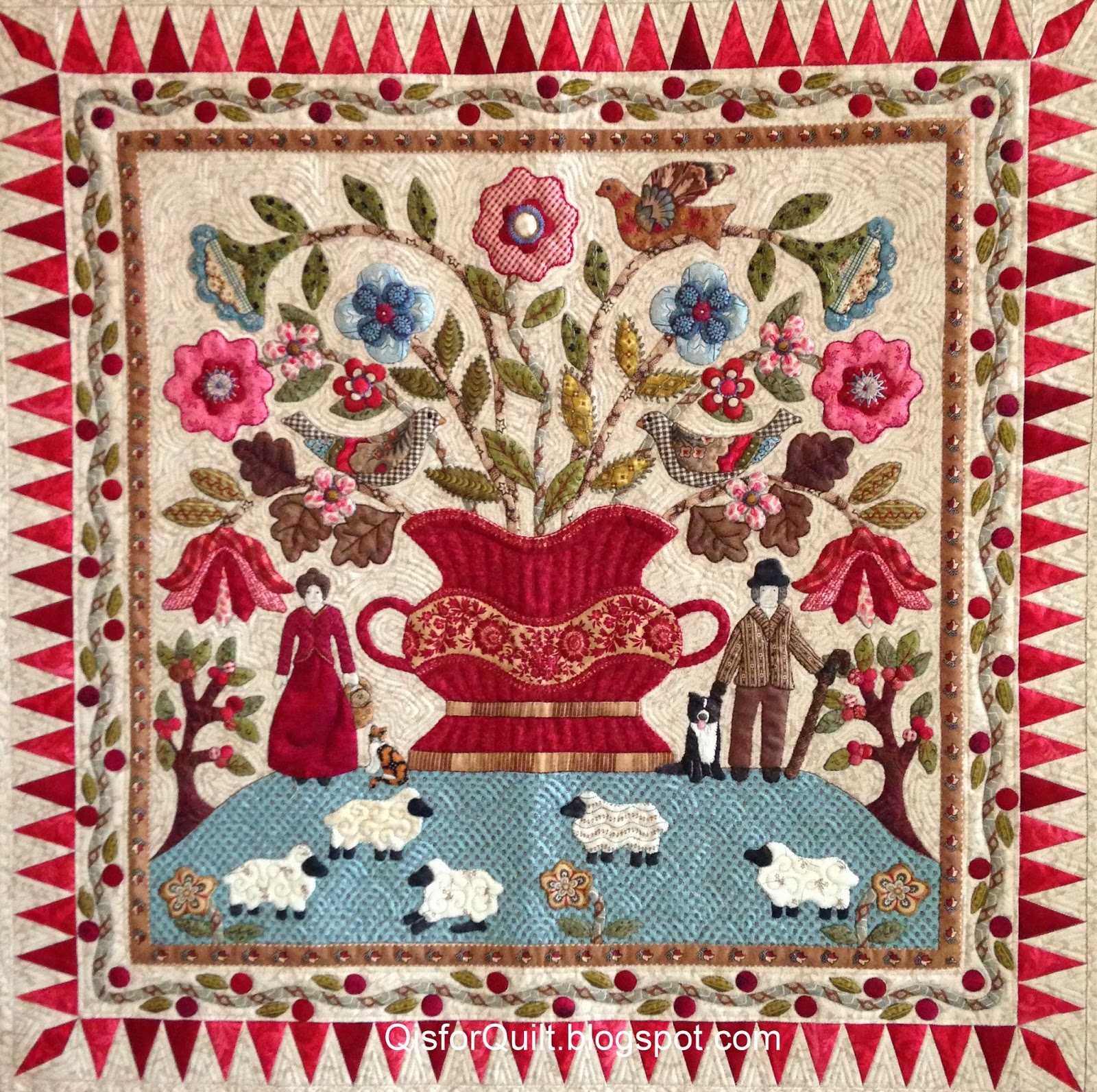 Whenever I get stressed out, I find myself starting a new quilting project. Quilting is my stress reliever!
I began working on Phebe in April of 2013. My husband's mother had passed away in February and my daughter's wedding in March had really stressed me out. We finally became empty nesters and I needed something to pour myself into.﻿ 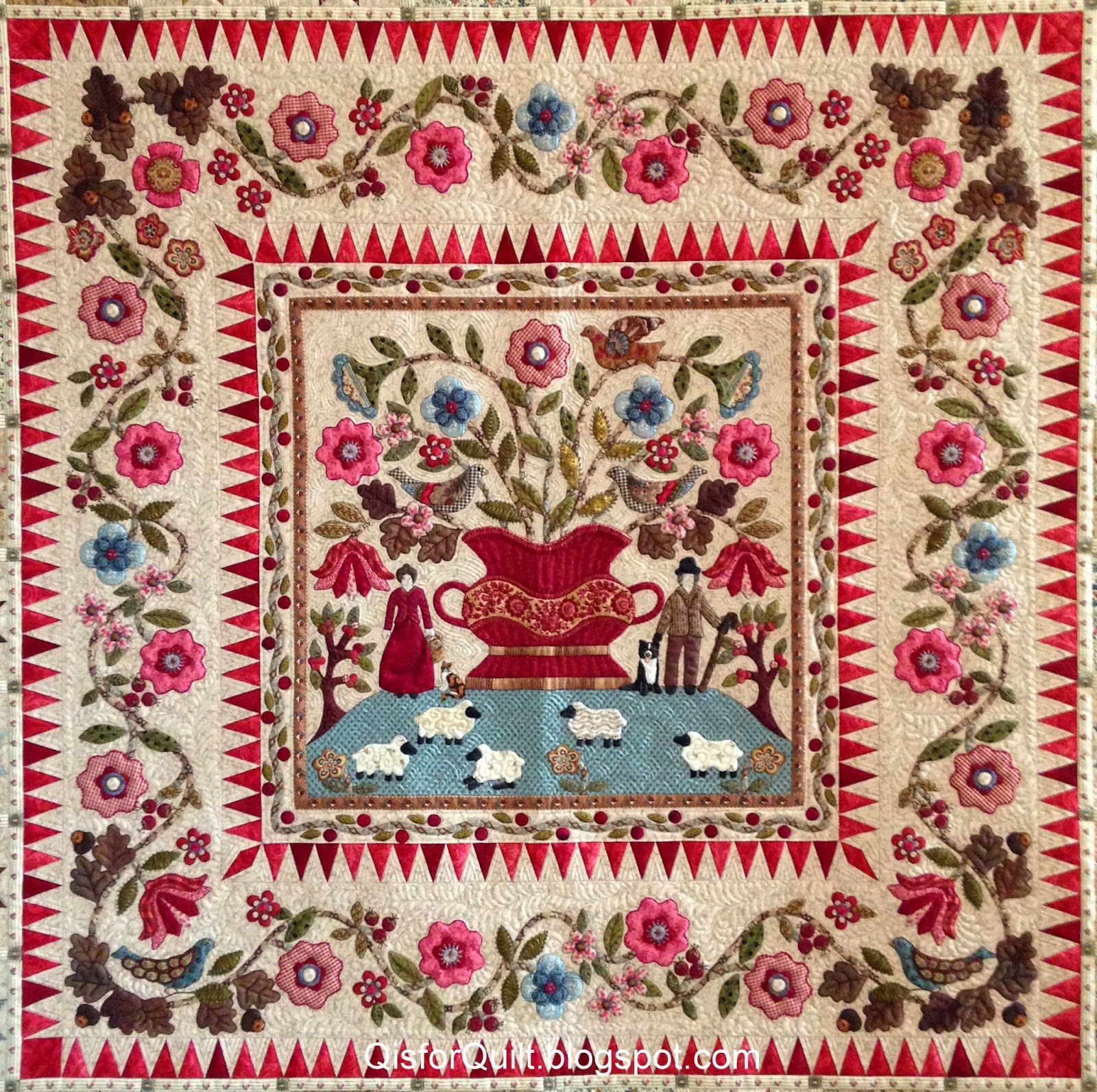 In June, my mother's health began to deteriorate and I spent many hours sitting with her in her room at the nursing home and during her hospital stays. Phebe was always with me. 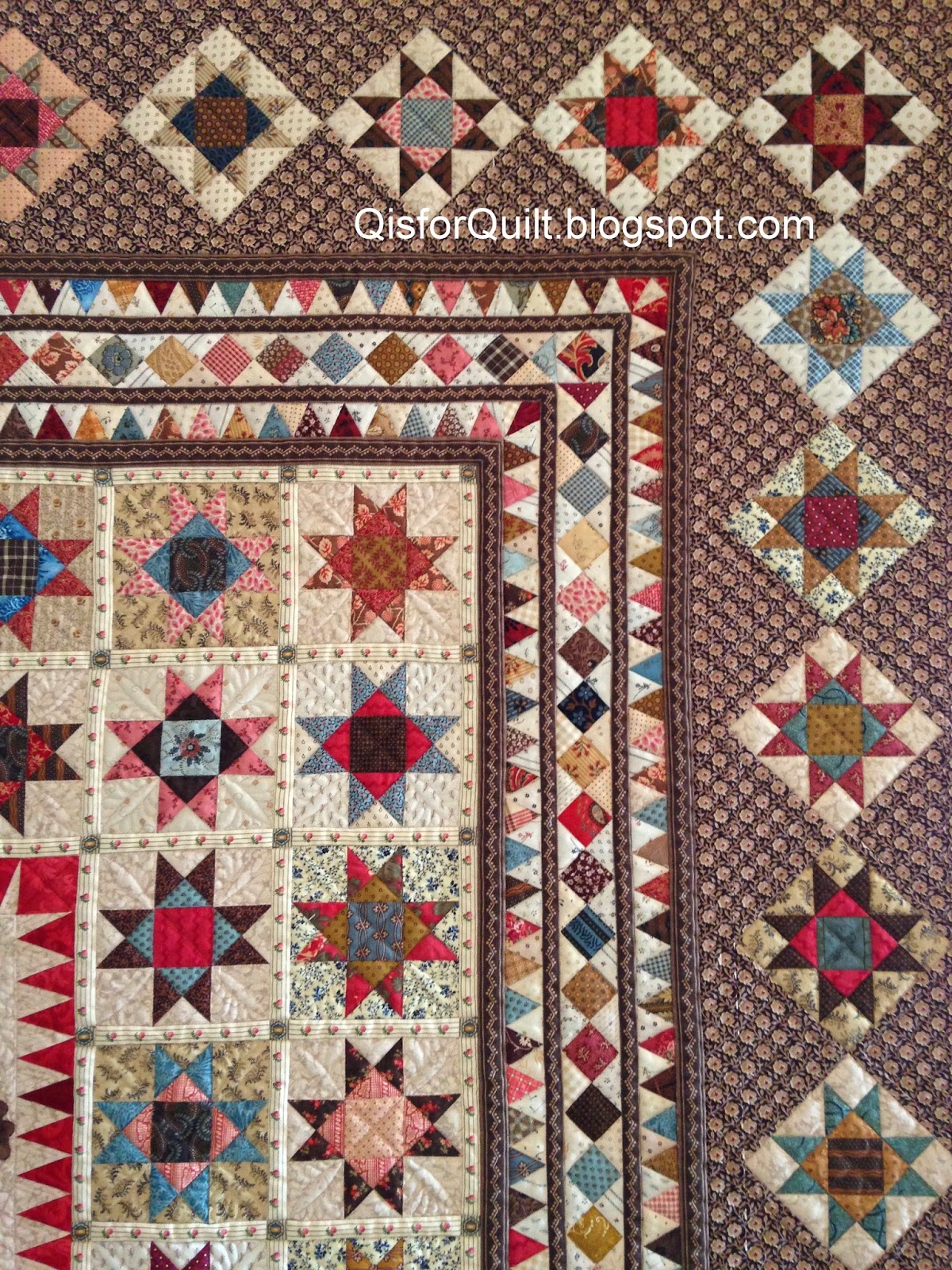 In August, hospice was called in to care for my mother and a few days later, she passed away. Planning the funeral, cleaning out her room, taking care of details took time. Feeling like quilting again took even more time but I began to enjoy working on Phebe again. I decided to finish this quilt in memory of both my mother and mother-in-law. Neither of them were quilters but both encouraged me to keep quilting! ﻿ 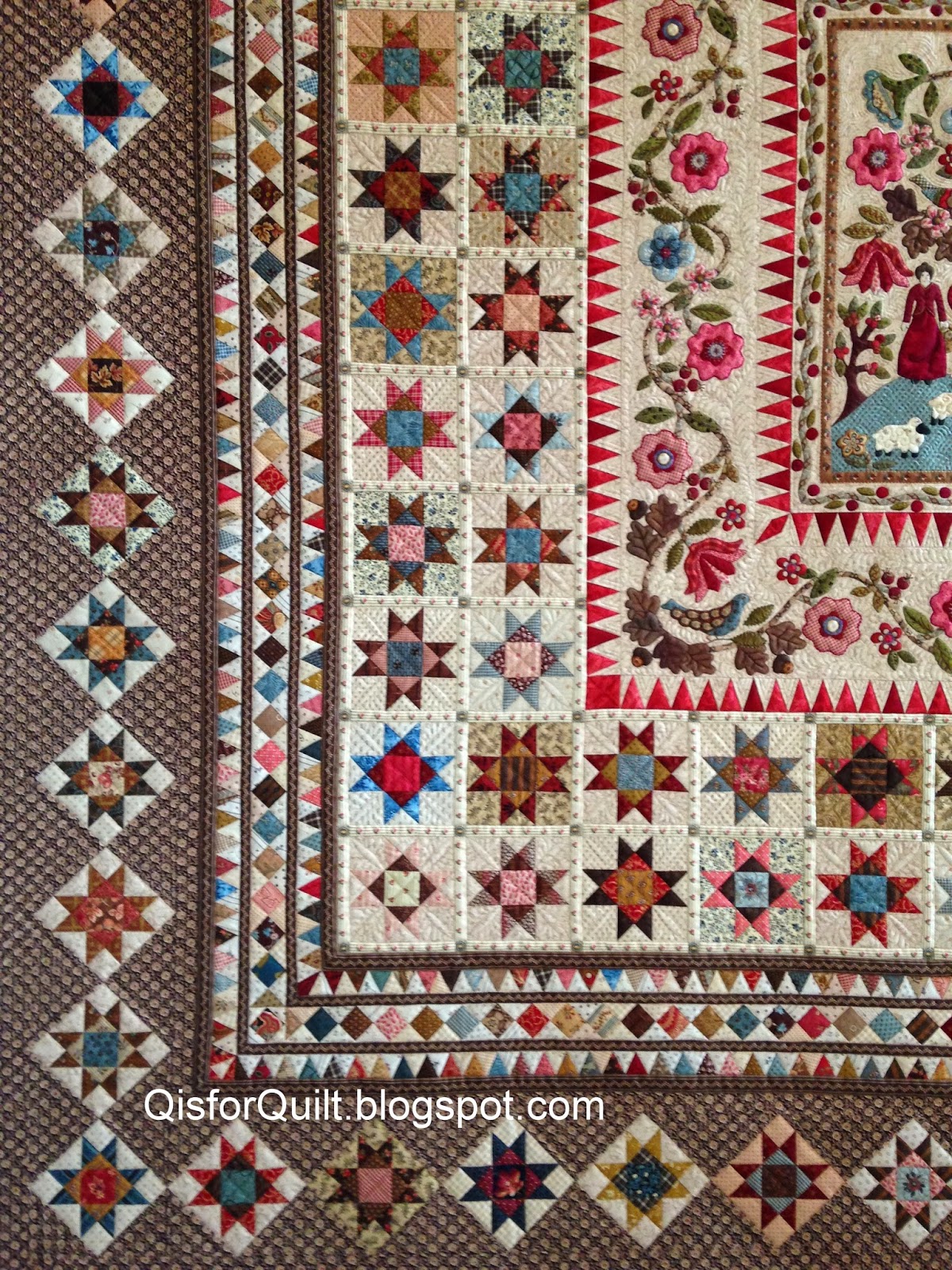 I can't remember at which step I was in September. My two years as our guild's Membership Chair were over ﻿which freed more time for me to work on Phebe. However, I felt like I was working in slow motion and not accomplishing much. It is so easy to get bogged down when working on a big quilt so my advice is to find a few quilters to hold you accountable and spur you on! 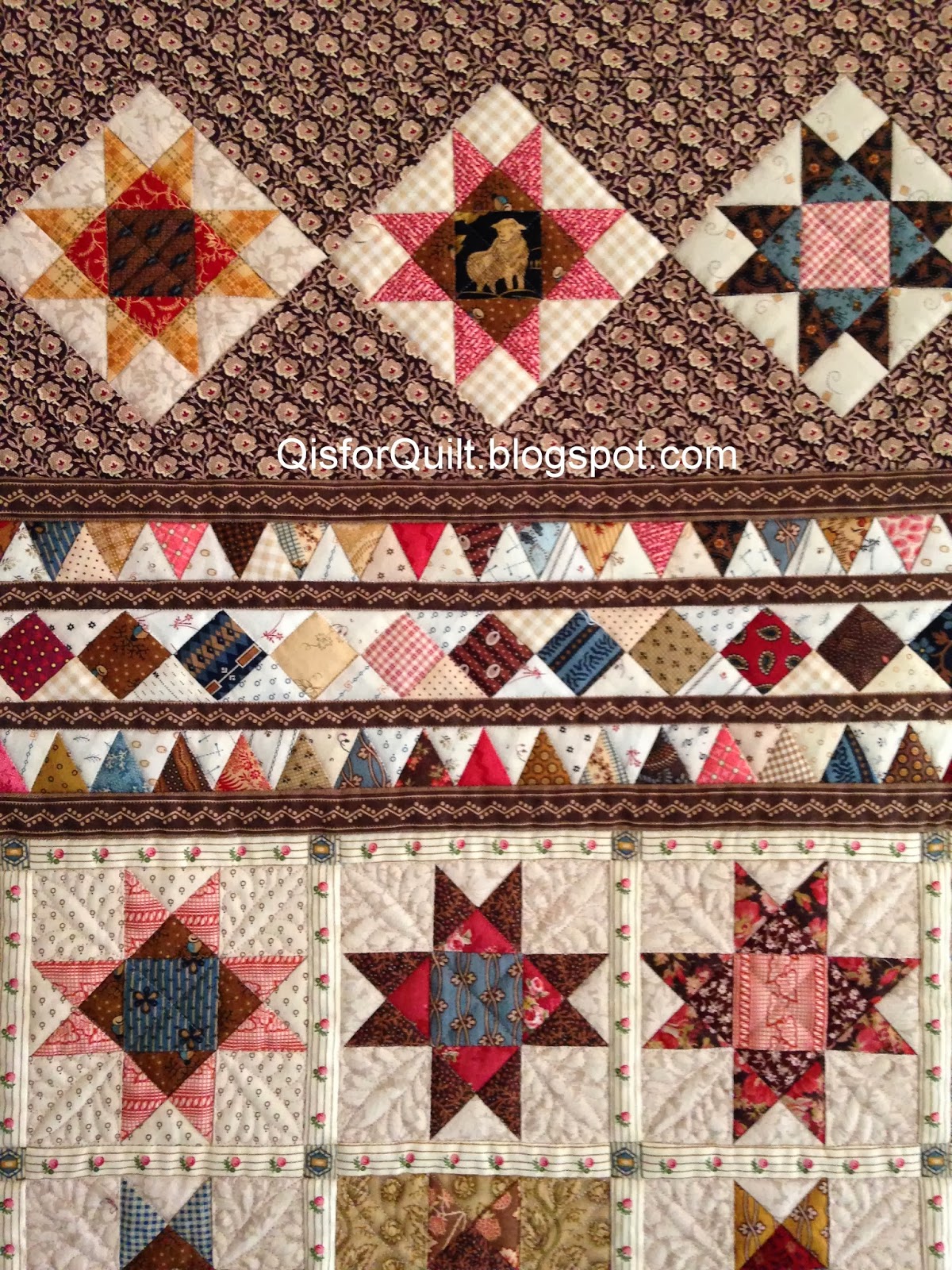 In fact, I did cheat and start a few UFOs just to help me fight the boredom of working on the same project over and over. At the end of 2013, I realized I hadn't finished a single project during the last twelve months! I couldn't believe it. 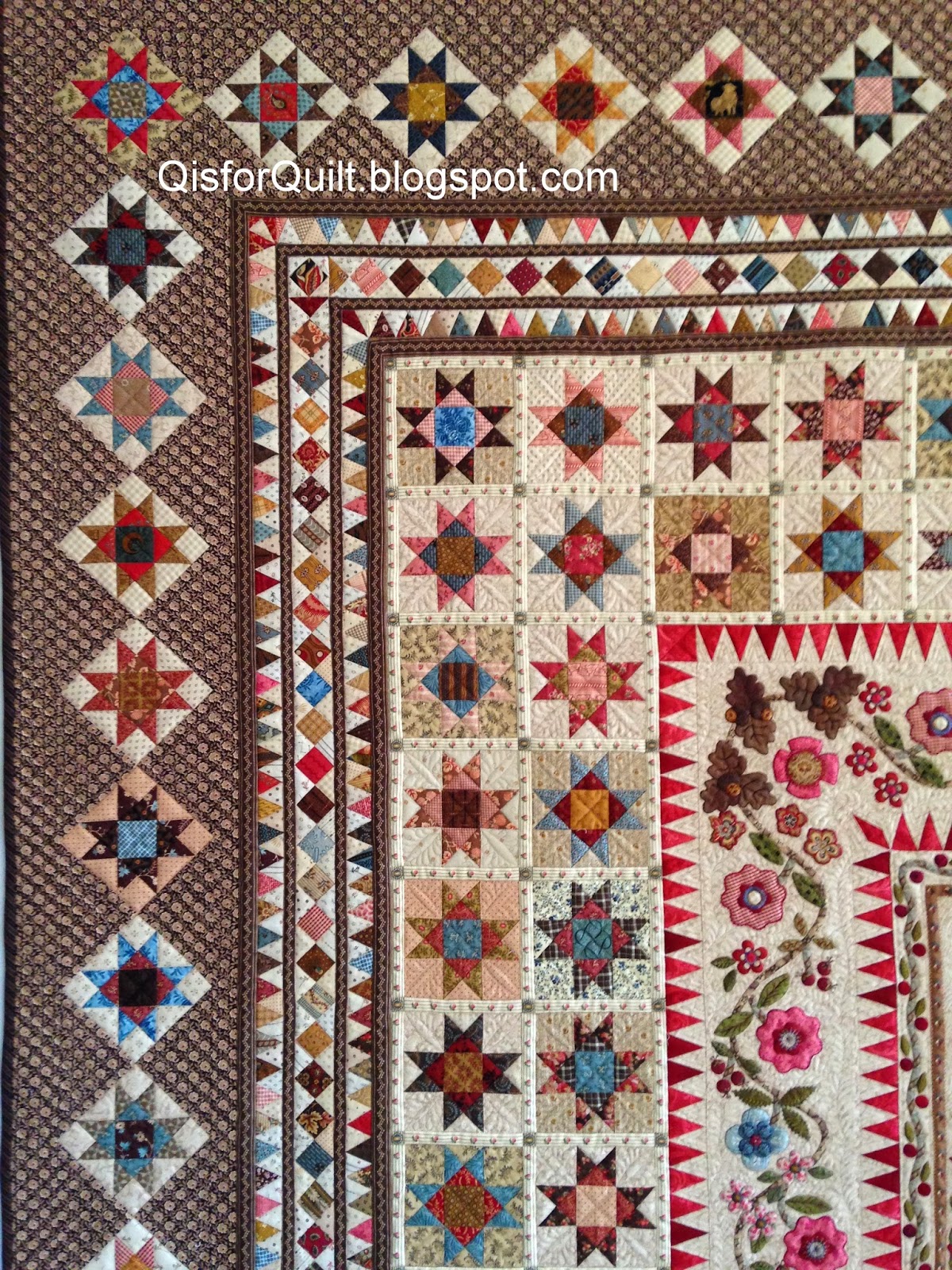 Di Ford's pattern for Phebe is her version of a wedding coverlet made for Phebe Warner in approximately 1803. This pattern is in her book, "Primarily Quilts". When I made my quilt, I purposely made Phebe and her husband, Henry Cotheal, appear mature as if they had been married several years versus the younger couple on the wedding coverlet. Even though I will always call my quilt "Phebe", her official name is "The Cotheals at Home". 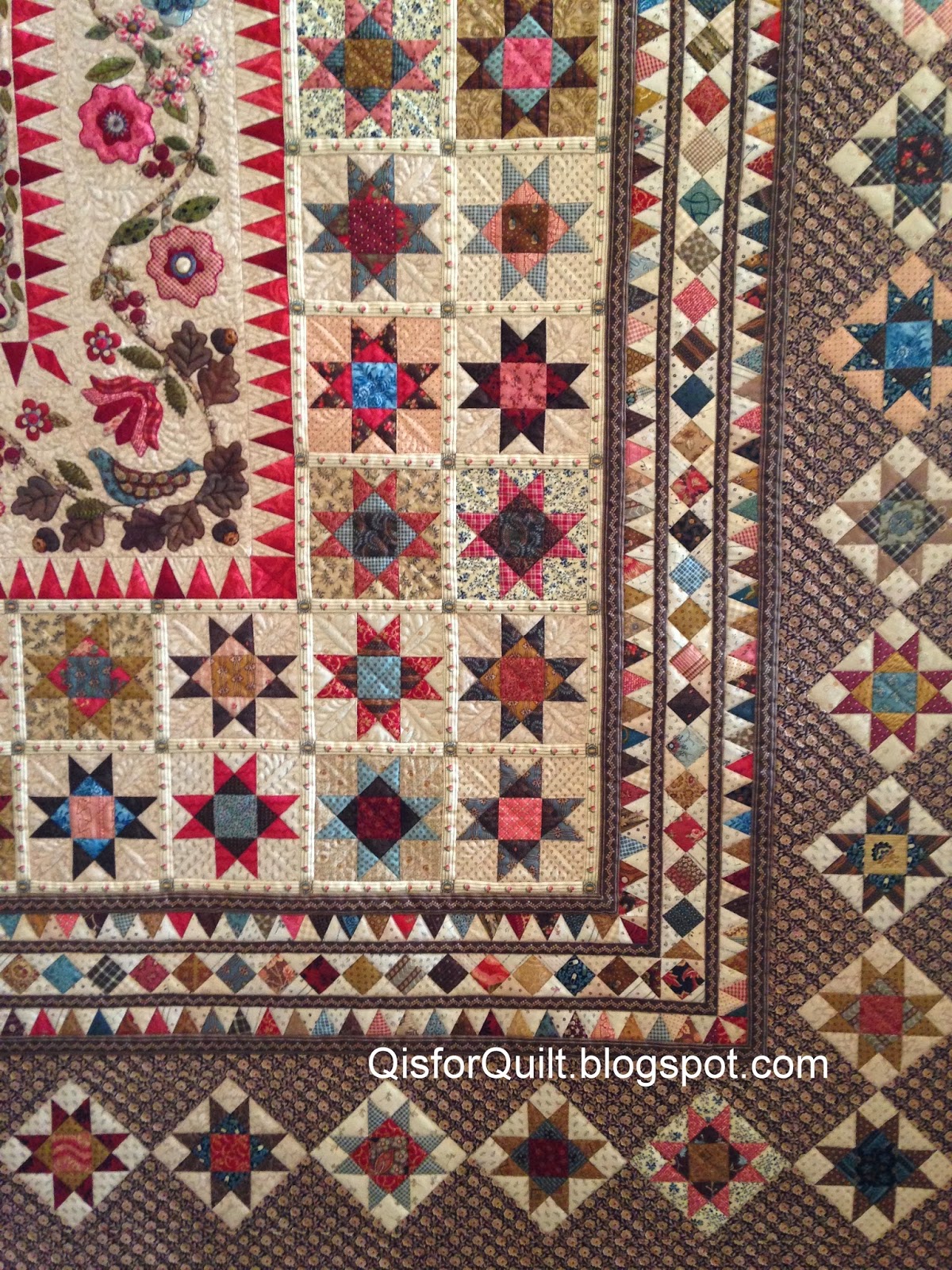 Blogger is driving me crazy today. I can't go back and redo things, can't center the text either. Just a pet peeve of mine but that's really driving me nuts. I'm sure not much of my ramblings are making sense so please just enjoy the pictures, LOL! 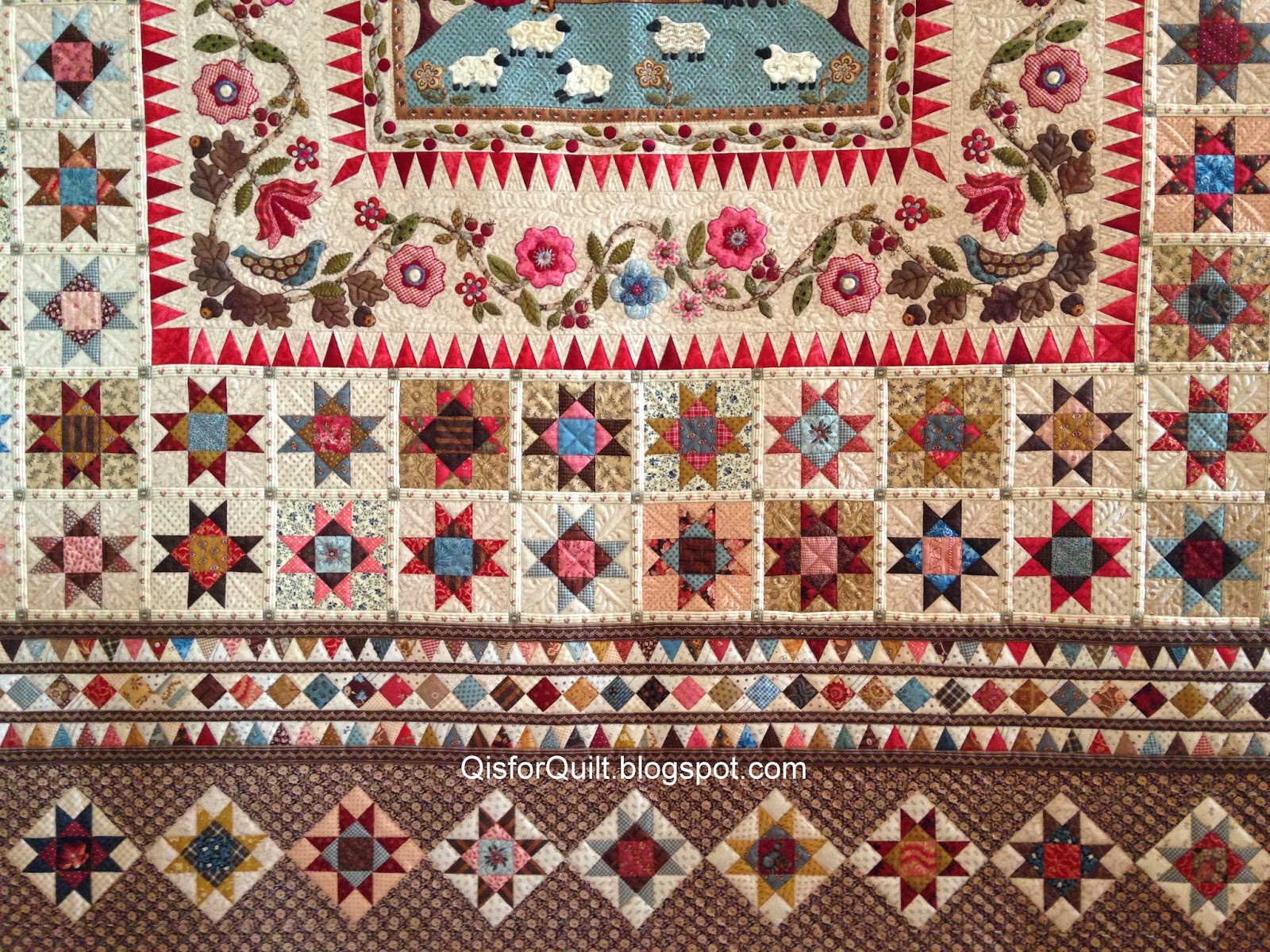 I do want to especially thank Jan, the machine quilter. Here's a link: http://thesecretlifeofmrsmeatloaf.blogspot.com/2014/02/phebe-mayleens-masterpiece.html to her blog where she plans to post much better close up photos of Phebe. She's done a wonderful job especially stitching in the ditch, making the Ohio Star blocks appear square and just generally covering up a lot of my not the best piecing! 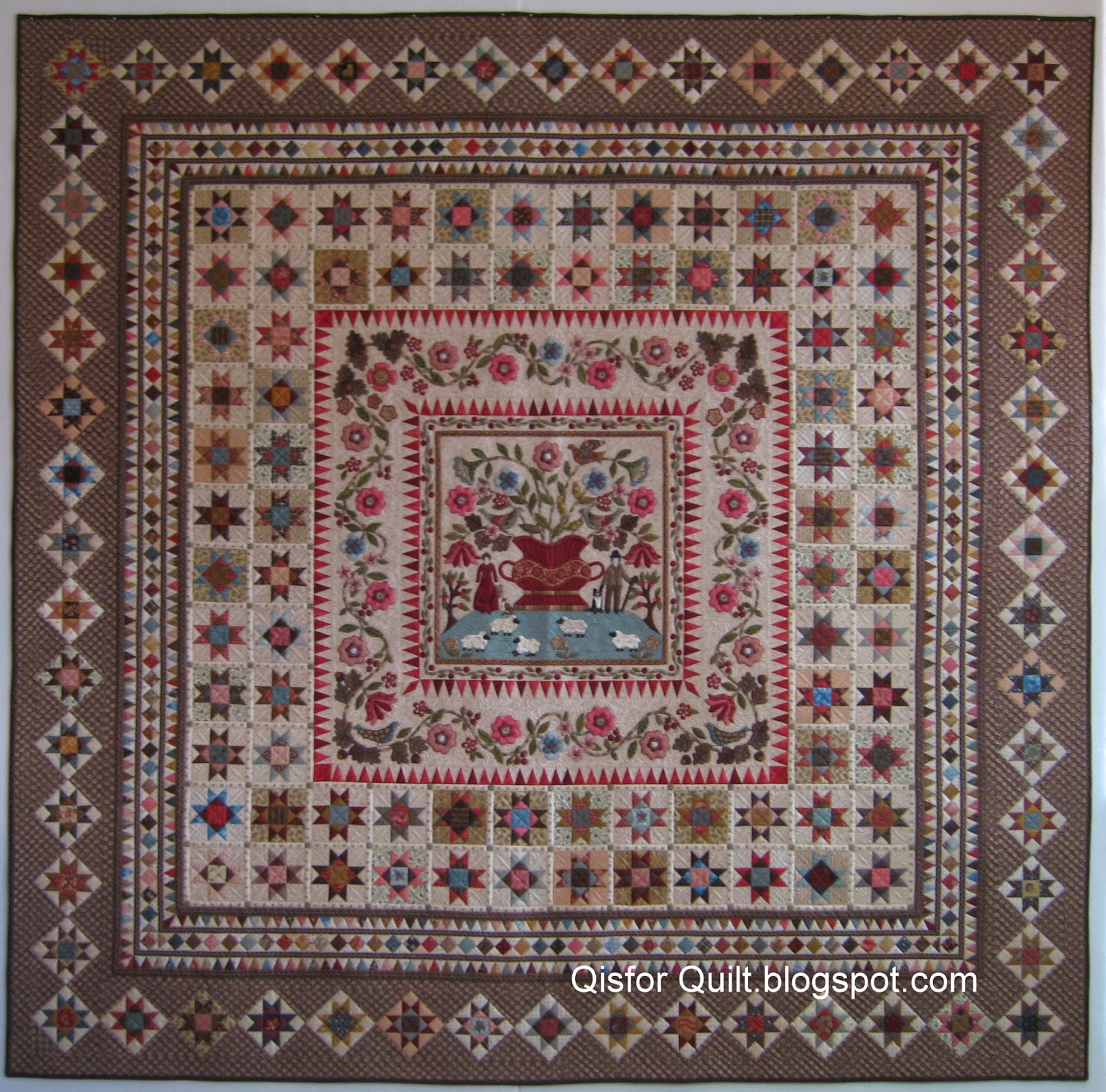 ﻿This photo was taken with my camera and the colors seem very blah. I'll be looking for a new camera soon, one for the technology challenged user! Did you know that I'm a Luddite?
More about my other projects coming soon!
Mayleen
Posted by Mayleen at 1:14 PM 21 comments: Now that Phebe no longer takes up all of my time, I've been working on my version of Love Entwined in the evenings. I had put it aside so I could work exclusively on Phebe and I'm seriously behind! Here you see most of Part 2 finished and a start on Part 3. Its looking a little pink at the moment which I hope to tone down with the addition of the flower vases in parts 4 through 7. 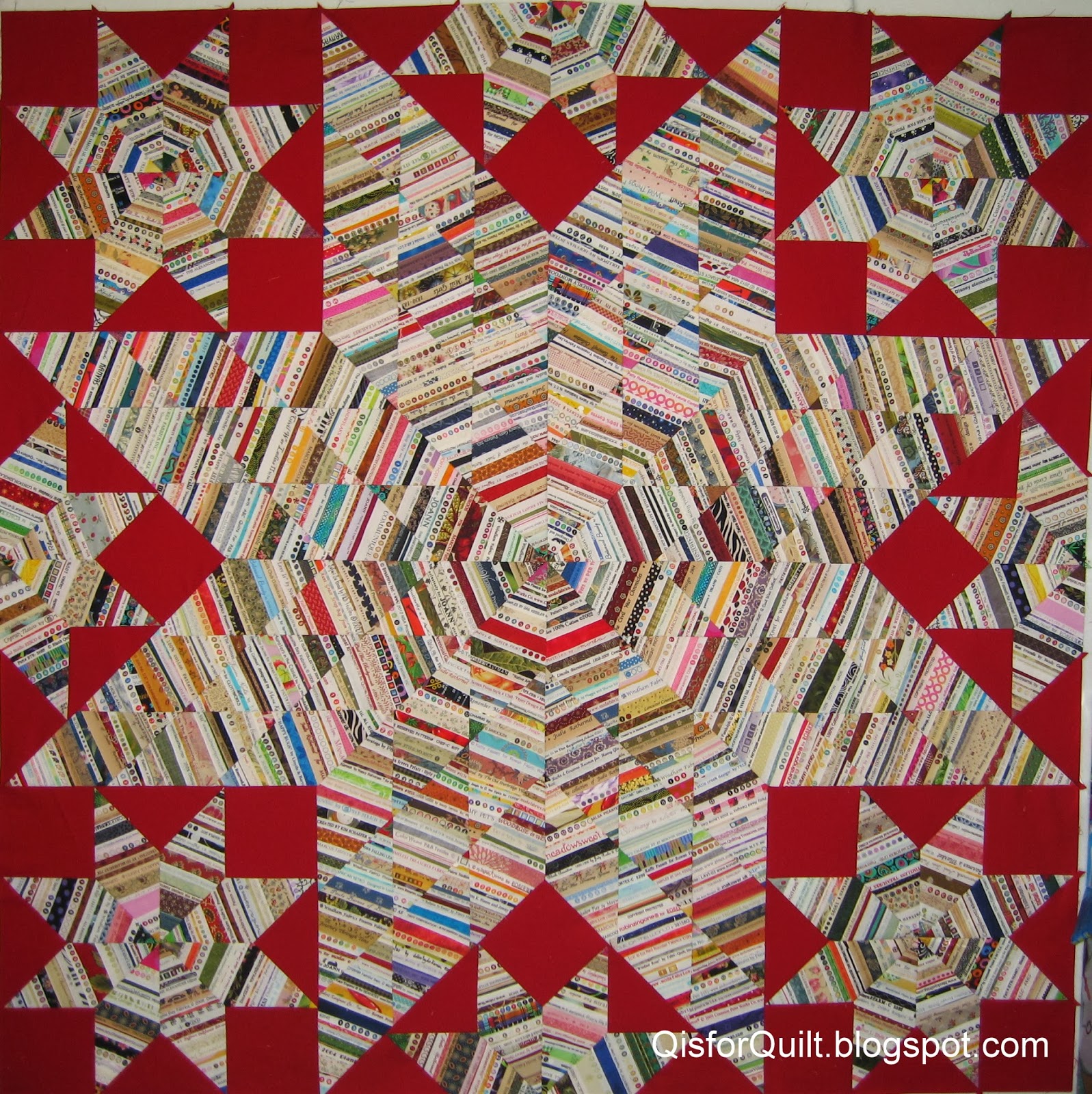 I've made the same mistake on the Selvage Star that I made on the Parlour's Tin Ceiling quilt - too narrow seam allowances. When I tore out the foundation paper, some of the seams let loose. I have quite a bit of resewing to do and quite simply, I don't like resewing. When I'm done, I'm done except in this case. Remember I said this would be a large wallhanging? Its going to be a really large wallhanging. Without the borders, it already measures 62 inches wide.

On the subject of foundation paper, I have had several people tell me they use regular printer paper when they paper piece. I tried it - disaster. I've also tried pages from old telephone books but I caused a major printer paper jam and now our printer squeaks. So now I use purchased foundation paper, sew with a large needle, a small stitch length, press the paper with a hot iron before removing it, crease it before tearing and I still occasionally have problems. I won't give up paper piecing because it gives me more accurate piecing so if you have any tips for removing foundation paper, send them on! 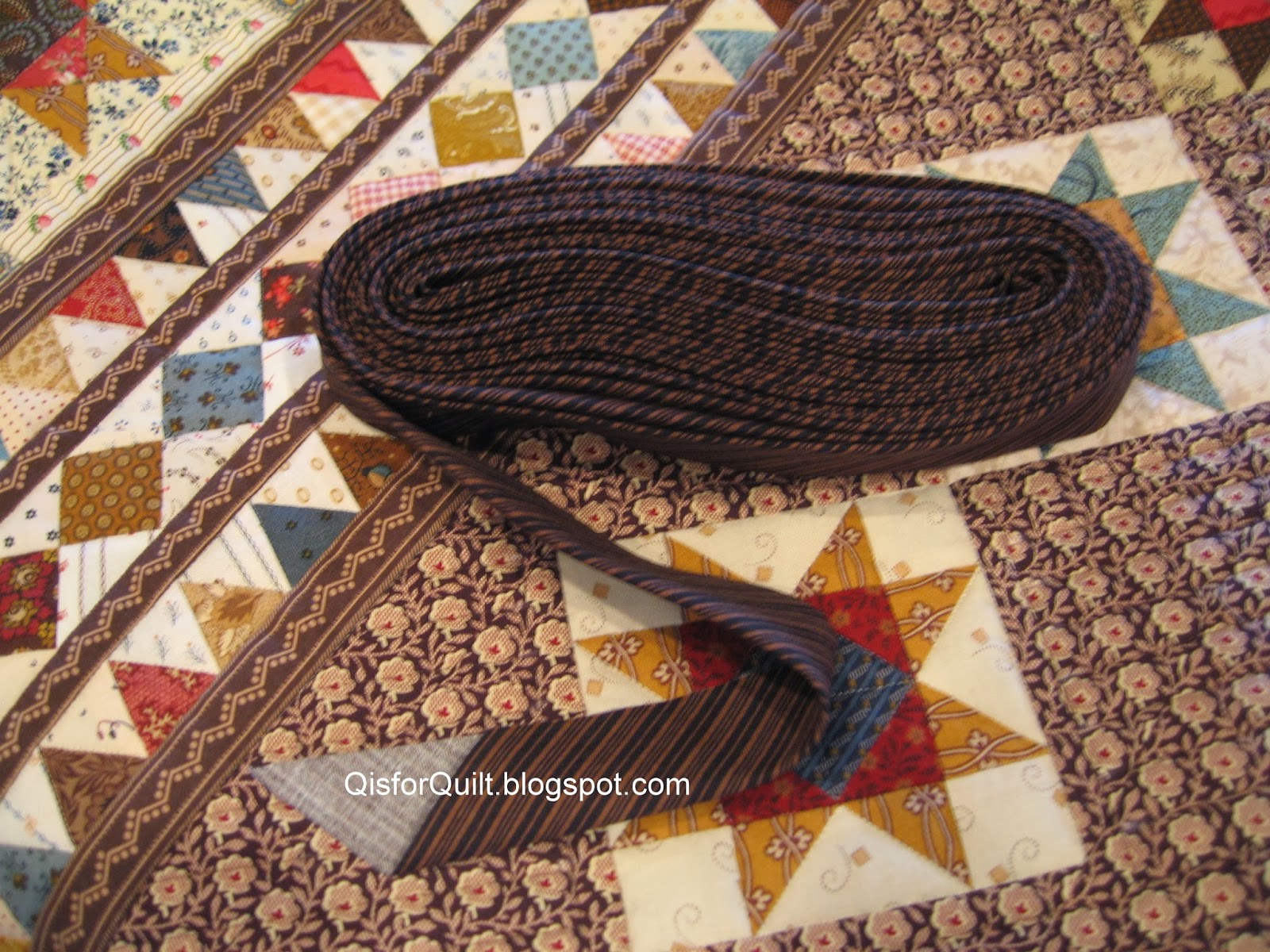 Guess who's home and ready to be bound?
Check back early next week to see Phebe in all her glory!

Until next time, Mayleen
Posted by Mayleen at 1:37 PM 6 comments: 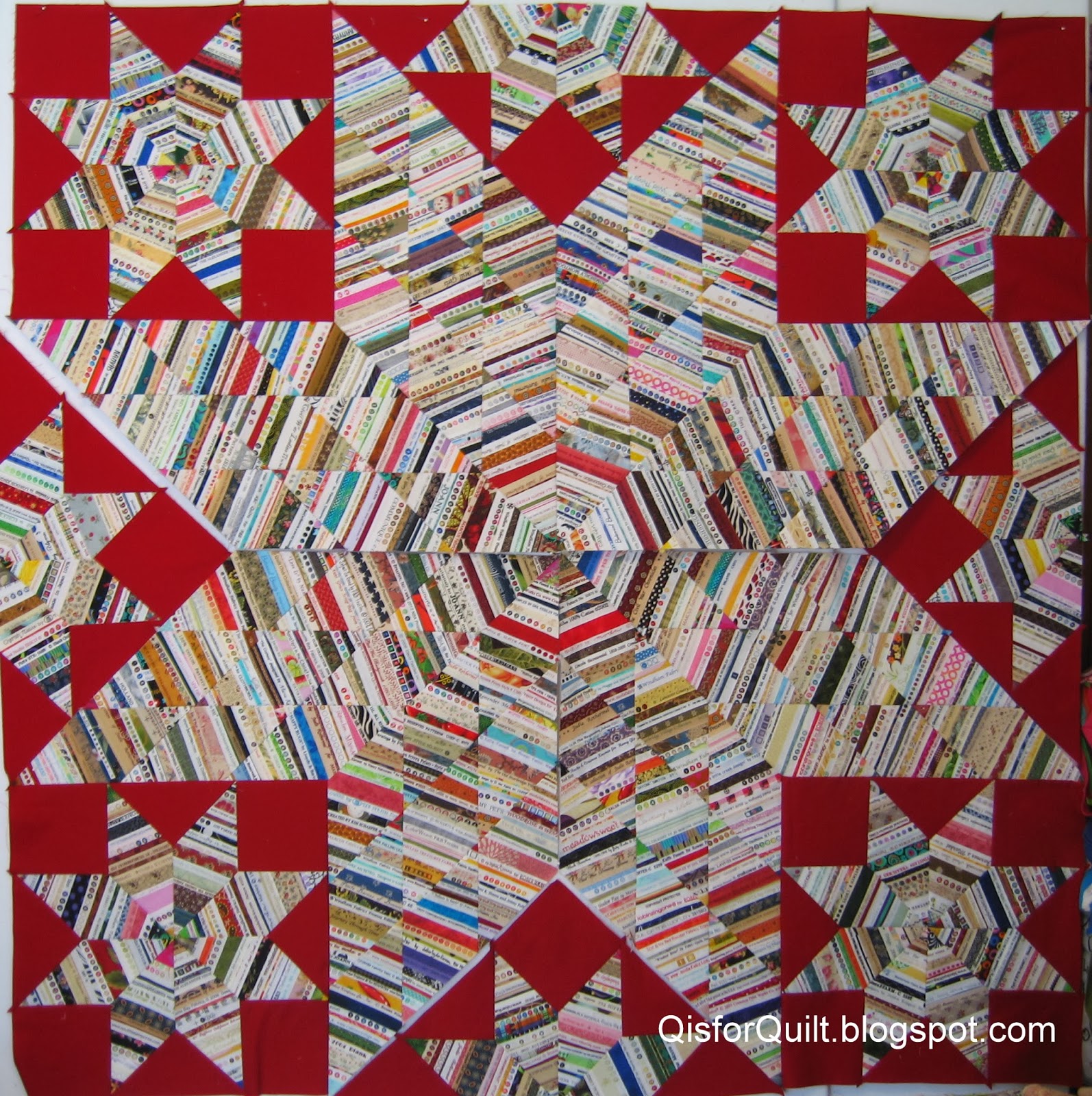 Before I show you all the stuff I found to get rid of as part of my "14 on the 14th. in 2014" challenge, here's what I've been working on today. Since I paper pieced the diamonds, I've been removing the paper today. What a tedious job! Still have a quarter of the star to do before I can stitch it together and add the side and bottom triangles.﻿ 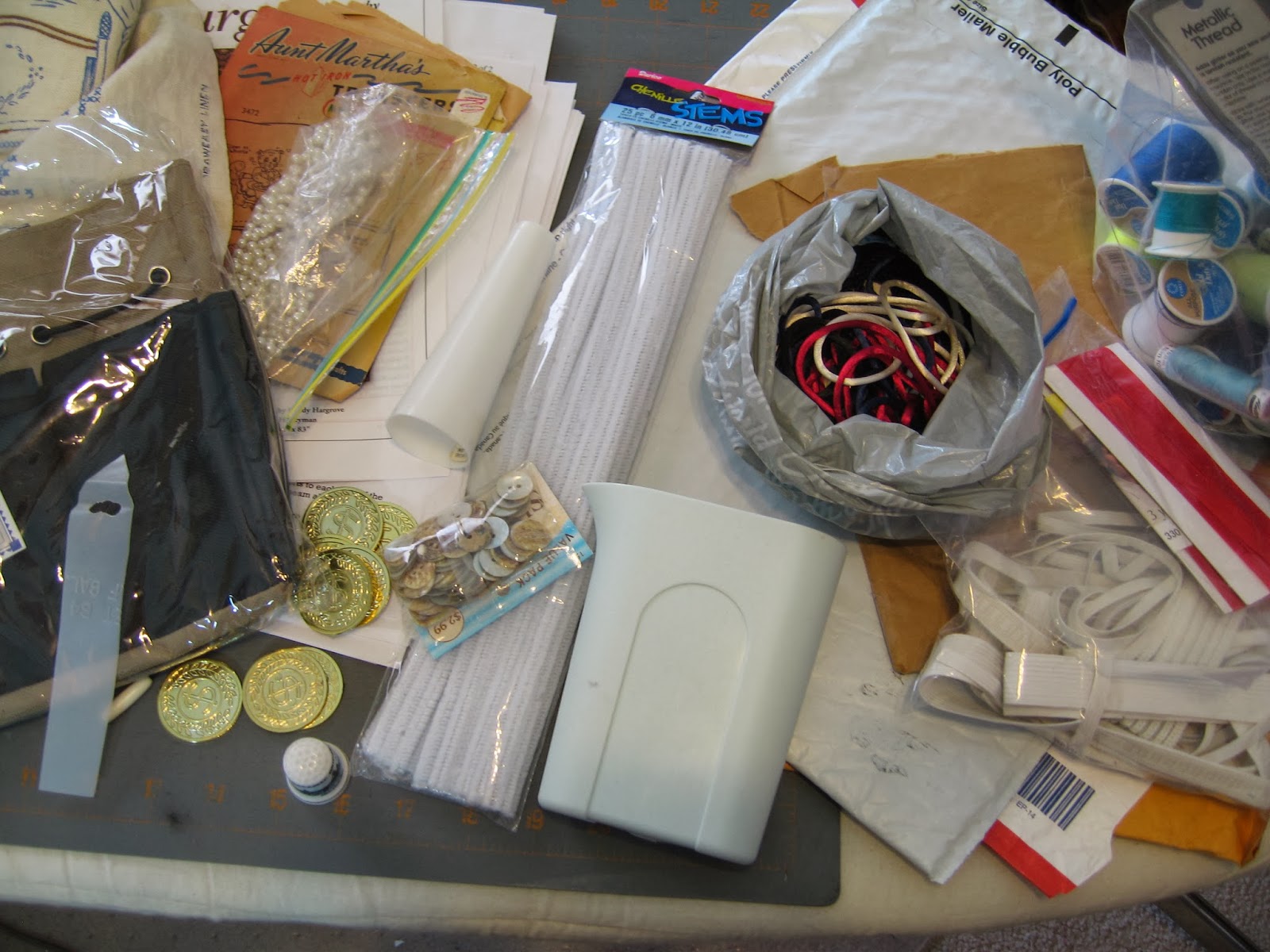 OK, here's the latest pile of stuff from my sewing room and there's lots more to come. Some of it was tossed but most of it will be donated. I think I'm becoming like my parents' generation because I've been saving everything from used mailers to mystery items like this:﻿ 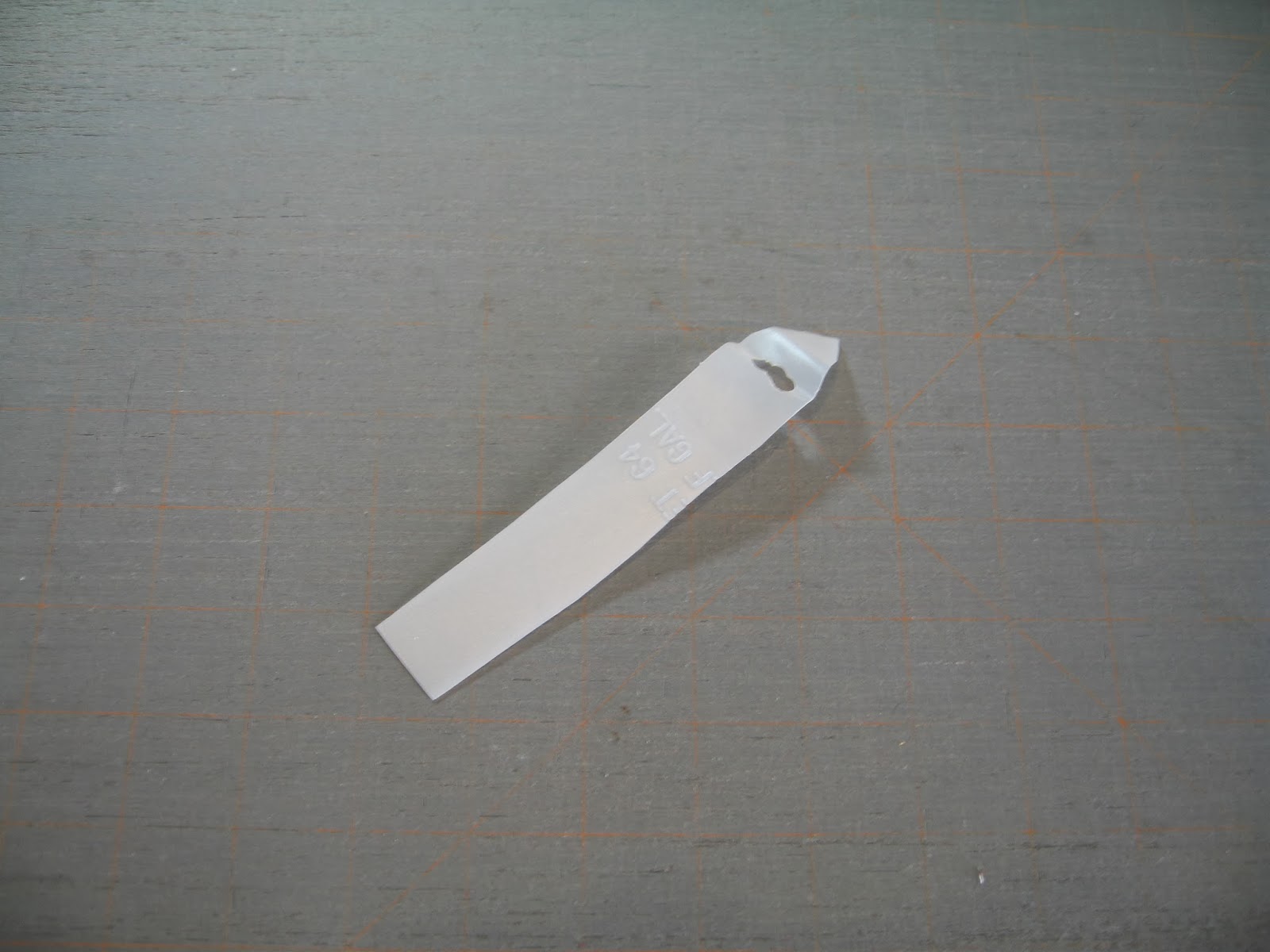 I remember (vaguely) that I made this "tool" from a plastic milk carton for a specific project but I have no idea what. Must have been something I thought I might use again! I'm curious so any ideas? 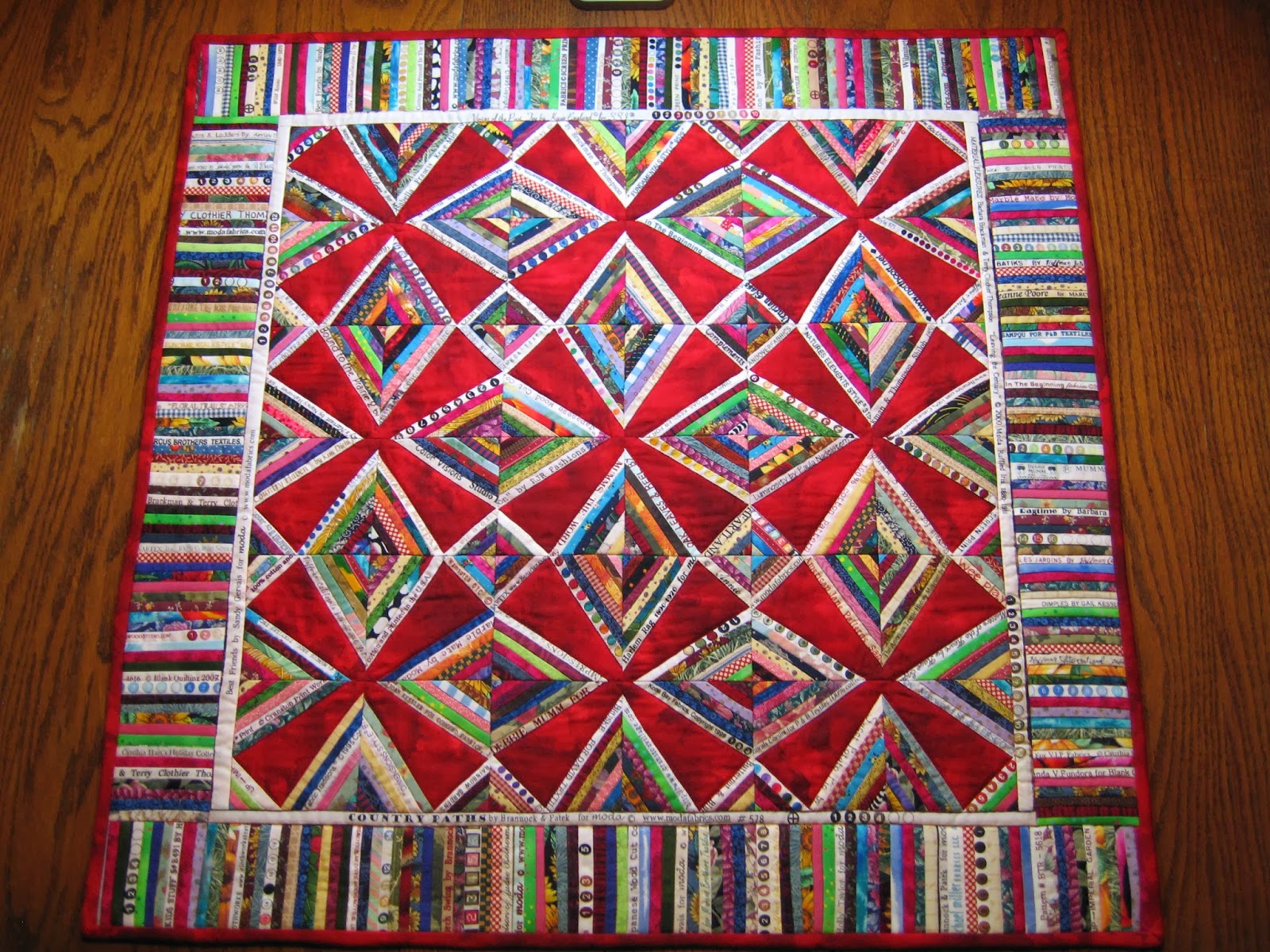 This is the first selvage quilt I made from an online pattern called The Red Zinger at the Selvage Blog﻿. I called my version "The Little Red Zinger" because I reduced the size of the pattern. It was one of my entries into the 2010 Common Threads Quilt Show in Wichita, Kansas.

Not totally understanding how to make a selvage project, I used the stitch and flip method instead of just putting the raw edge of the fabric under the previous selvage and then stitching. I can laugh at myself now trying to keep all the edges straight and stitching those tiny, tiny seams! 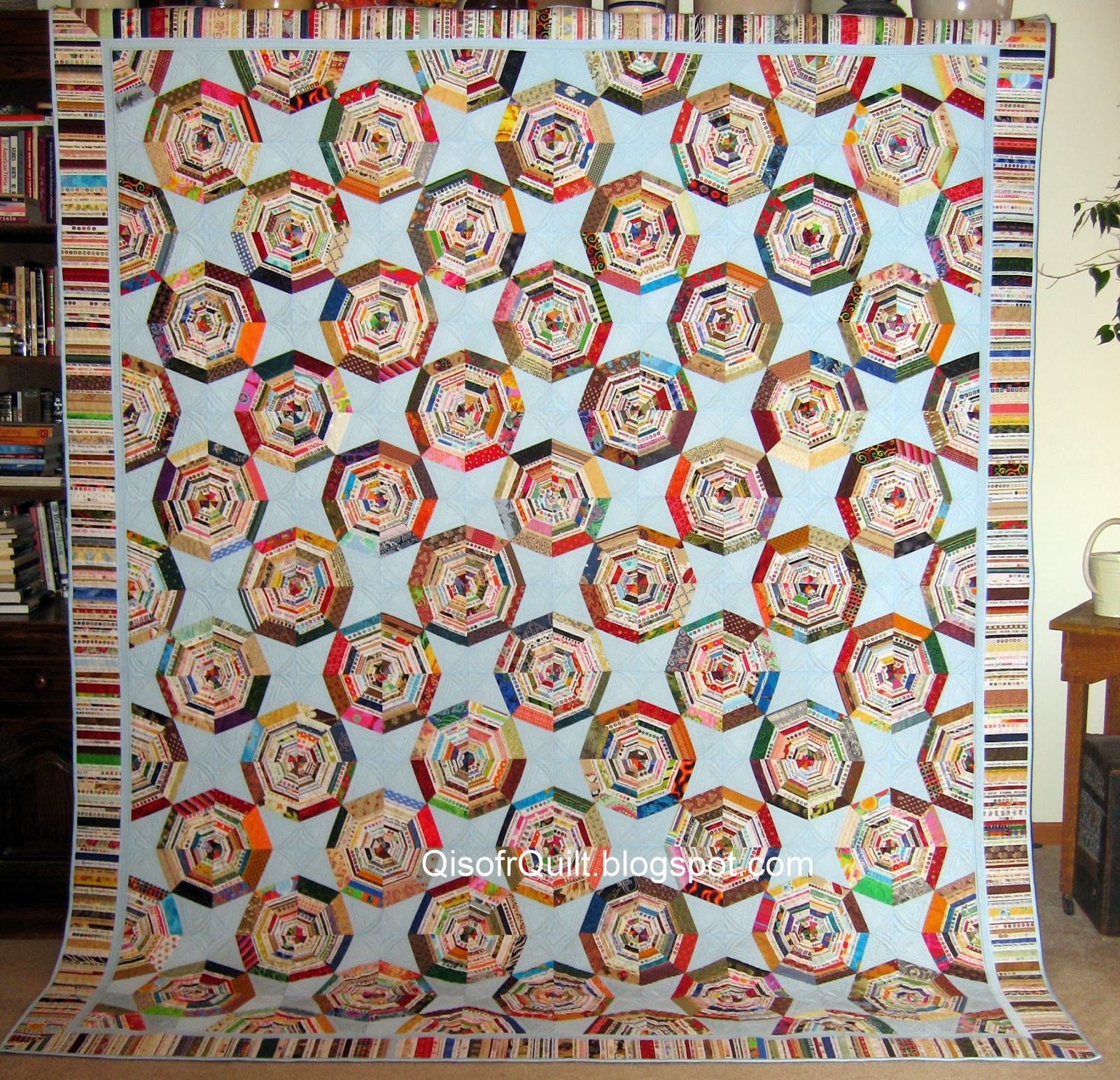 Two years later, I decided to go bigger! I saw a selvage spiderweb quilt on Jacquie Gering's blog http://tallgrassprairiestudio.blogspot.com/2010/04/spiderweb-tutorial-for-selvages.html . My version is called "the Parlour's Tin Ceiling Quilt" because the machine quilting makes me think of the old tin ceiling designs. 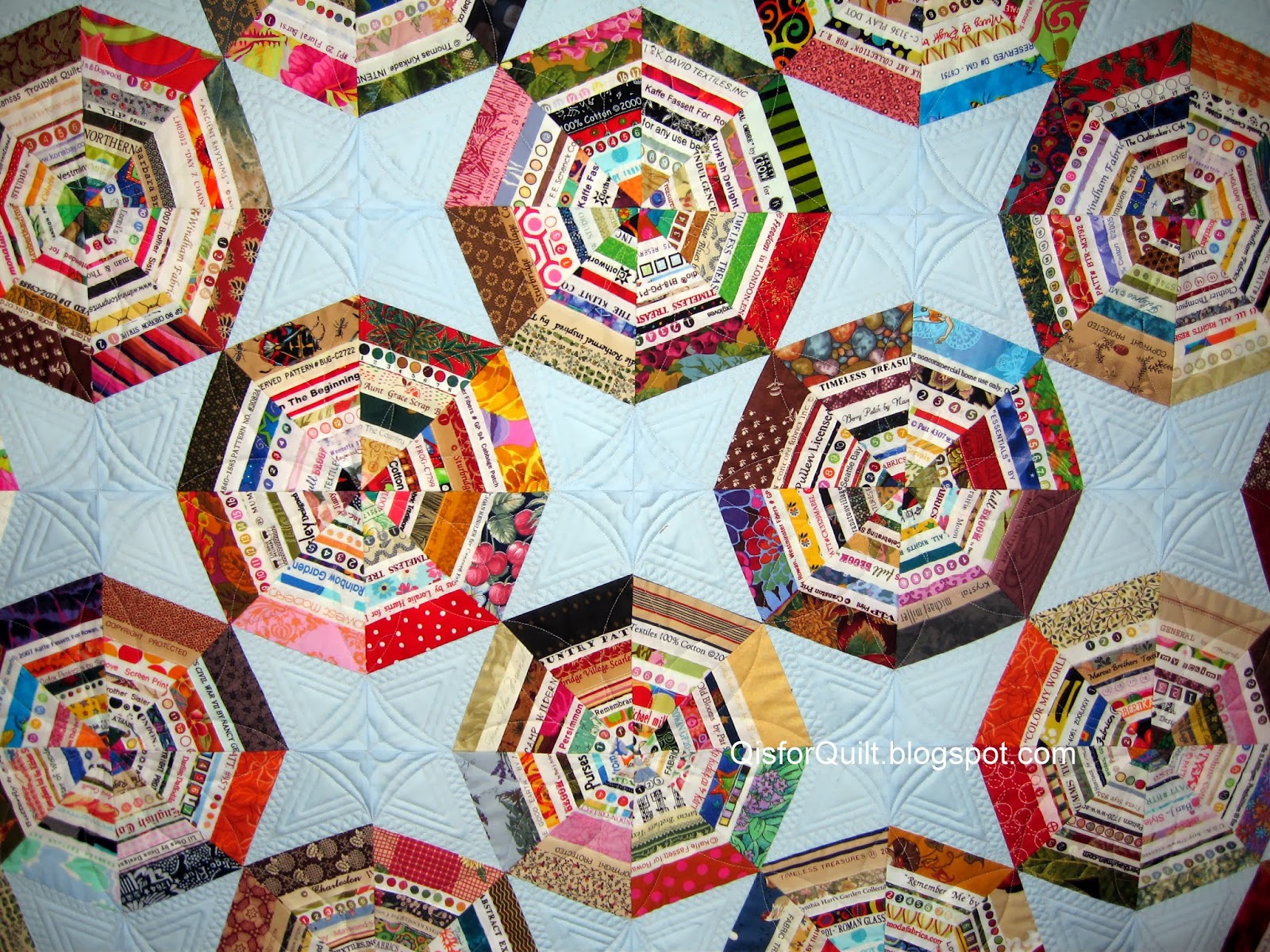 Jan Hutchison from http://thesecretlifeofmrsmeatloaf.blogspot.com/ did the quilting. I entered it into the non-judged portion of the 2012 Common Threads Show and it was picked by one of the Celebrity Judges to receive a ribbon! I was really very surprised.

So, this June is our 2014 Common Threads Show and to carry on the tradition of entering a selvage quilt, I'm currently working on a selvage version of an antique string Bethlehem Star Quilt. It should be finished and ready to go to the machine quilter within the next couple of weeks. 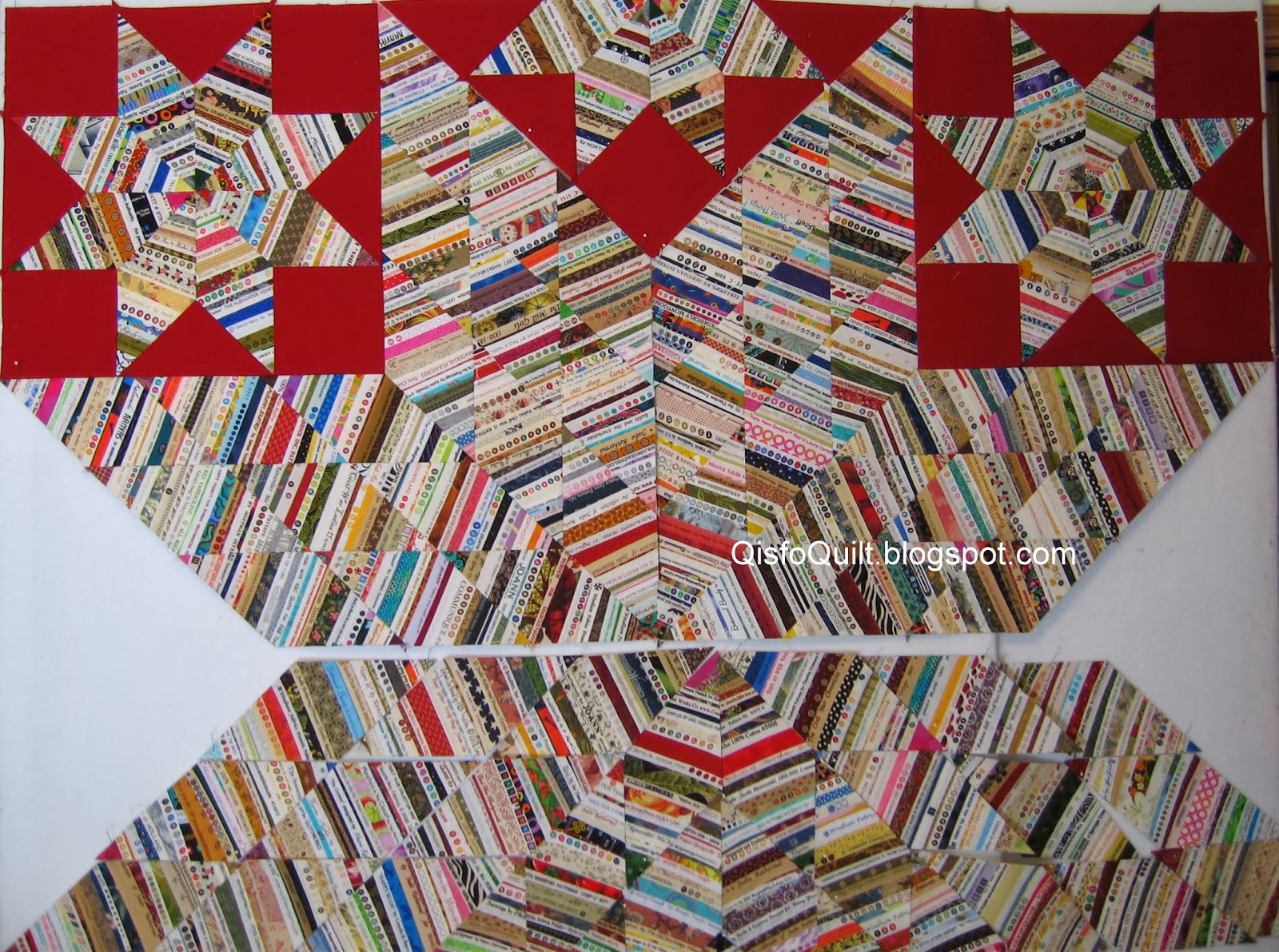 It will not be bed sized (thank goodness!) but will be a large wallhanging when finished. I've never made a Star of Bethlehem (also called Lone Star) quilt and I'm learning all about inset seams. Let me say that some of mine are better than others! It still needs its borders which are going to be fun.

When I'm finished with the selvage star quilt, I will still have selvages left over. I actually have another selvage quilt started which I've already named "Selvage Streaker" and have another one bouncing around in my brain called "Miss Hiss Goes Amiss". Its safe to say that I will never get all of my ideas stitched!

Meanwhile on the traditional quilt front, I've begun working on my version of "Love Entwined" again. I had to put it aside so I could finish "Phebe" and get her to the quilter in time. I haven't worked on LE since August (?) and all this time, its been hanging on my secondary design wall.

The more I looked at it, the more I didn't like it. The blue triangles were overpoweringly blue so I unpicked them and those little daisies too. I've been drawn to Jane's LE at http://janesthreads.blogspot.com/2014/01/de-vierde-vaasthe-fourth-vase.html and have decided to try the scrappy look myself! I'm just now working on the zigzag border and have begun the daisies. I really dislike stitching those daisies, very fiddly. This coming weekend, LE part 9 will be released and then I will only be 7 parts behind. Its quite daunting to look at how much applique I have to do until I'm caught up!

Phebe should be back from the machine quilter soon and then there'll be the binding and label to stitch on. I'll post photos of her finished self as soon as I can.

PS - If you are missing your cold, gloomy, snowy weather, it was delivered to my house and has been here for over a week. I keep getting fresh installments. Please advise me of your address so I can forward it to you!