Playing with the Pine Burr

I'm taking a break from Phebe and trying a new to me technique. 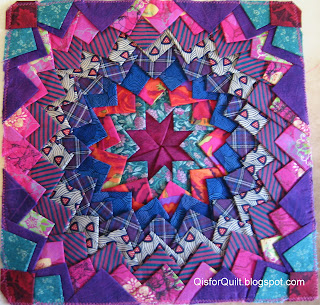 This is the Pine Burr block which is also known as the Pinecone, Target or Bullseye block. Its the state of Alabama's state quilt block. Wonder how many other states have an official state quilt block? I highly doubt that Kansas does although there are several quilt blocks with our state's name in it.

Ever since I saw this block on Nifty Quilts blog (http://niftyquilts.blogspot.com/2012/10/doin-pine-burr.html), I've wanted to make one. Tried to forget it and finally just gave in and began cutting fabric. This is a great stash buster because you need a lot of 3" squares to make one block! I think I used around 150 triangles in this 12.5" square block. I will be fixing those not square corners and then making more blocks as I have time to cut and press triangles.

So what does Phebe think about all this color? Since she's still smiling down at me from my design wall, I think she likes it. She's not afraid of a little color! I've done some embroidery work on the center panel and have begun the first narrow applique border so work continues on the Phebe quilt. 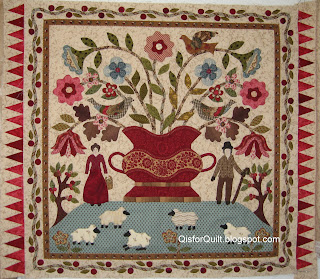 Borders #1 and #2 were what I thought would be the easiest borders on the Phebe quilt. Ha.

Oh sure, the first border is easy but its only 1/2 inch wide and I know its not on straight or even or ... but I can live with it.

Border #2 was fairly easy applique except for the berries and most definitely those mitered corners. I lost track of how many days I worked on them but they're done!﻿

Unfortunately, I put my "mark of ownership" on the bottom Border #2. Remember the "Measure twice, cut once" saying? Well, I measured at least twice and probably more like 5 times. Put my measuring tape down, picked up my rotary cutter and ruler and trimmed the border an inch too short. I still don't know how I did it. Anyway, I pieced it since I didn't want to redo the applique and don't think it will be very noticeable. 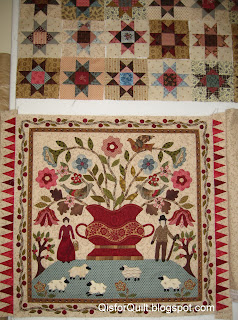 As you can see, I've started paper piecing the dogtooth border #3. I'm trying to convince myself that I like the fabric and am not succeeding. I'm using Baltimore Album by Mary Koval but it looks too neon pink to me so I tried to tone it down with some burgundy fabric I had. I don't think its working very well. The Baltimore Album fabric is the third fabric try, everything else looks dull and flat when I put it next to the center block.

Above the block are some of the Ohio Stars I've been piecing. They're a little brighter too so maybe the dogtooth border fabric will work. And then again, maybe not.

Tomorrow is quilt guild day so I'll put this project up tonight and just think about it till Wednesday. Maybe the quilting fairy will pay a visit to my sewing room and solve my color issues!

If you aren't familiar with the Phebe quilt pattern, here is a photo of the complete quilt. You can see I have quite a ways to go! 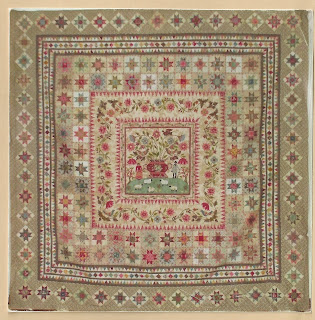 Until next time, Mayleen﻿
Posted by Mayleen at 9:37 PM 9 comments: 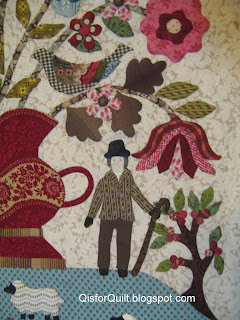 Mr. Phebe - Planning how to make his suitcoat was fun, appliqueing the lapels was not. His suitcoat will have embroidered buttons, probably French Knots. Giving him "salt and pepper hair" was fun but appliqueing those little pieces before they frayed out sure wasn't fun. I think he turned out fairly well though.
﻿ 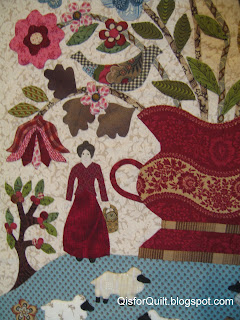 Mrs. Phebe - Because her jacket color melts into the skirt, I plan to embroider around the jacket hem and give it buttons also. Instead of holding a flower, Mrs. Phebe is carrying a basket. I hope you recognized it because it took me a long time to make!

I'm sorry you can't see their facial expressions very well. I just couldn't get a good photo. My camera hasn't taken very good photos ever since Bonnie (the cat) pulled it off the kitchen counter. She's our kleptomaniac and loves shiny things. Twist ties are also not safe if she's around but you're not here to read cat stories so back to quilting!

Except for Mrs. Phebe's eyes, which are French Knots made using 1 strand of DMC floss, I used silk applique thread to embroider their eyes, eyebrows, nose, mouth and chin. The DMC floss just seemed too heavy.

This is the first time I've ever appliqued people. Unfortunately, I didn't choose a good skin tone fabric for their faces and Mrs. Phebe's hands. I'm glad Mr. Phebe is wearing gloves. The fabric looked quite tan in the fabric shop so I bought it. I'm going to try embroidering an outline stitch around her hands using light gray applique thread to make them more visible.

The quilt's center block is now mostly finished except for moving a leaf and the embroidery work. I'm planning to do the embroidery in the evenings and move on to piecing more of the Ohio Stars and prepping the applique vine border next.

Till next time, Mayleen
Posted by Mayleen at 8:24 PM 7 comments:

Labels: Mr. Phebe, Mrs. Phebe
Newer Posts Older Posts Home
Subscribe to: Posts (Atom)
When I stand before God at the end of my life, I would hope that I would not have a single bit of talent left, and could say, 'I used everything you gave me.'