Life certainly can change quickly, can't it? Just when I thought my life was getting a little predictable and boring, wham! To try to catch up, here are a few pictures and short explanations. Believe me, the story behind the story is too long.

First of all, Mustard and Ketchup - 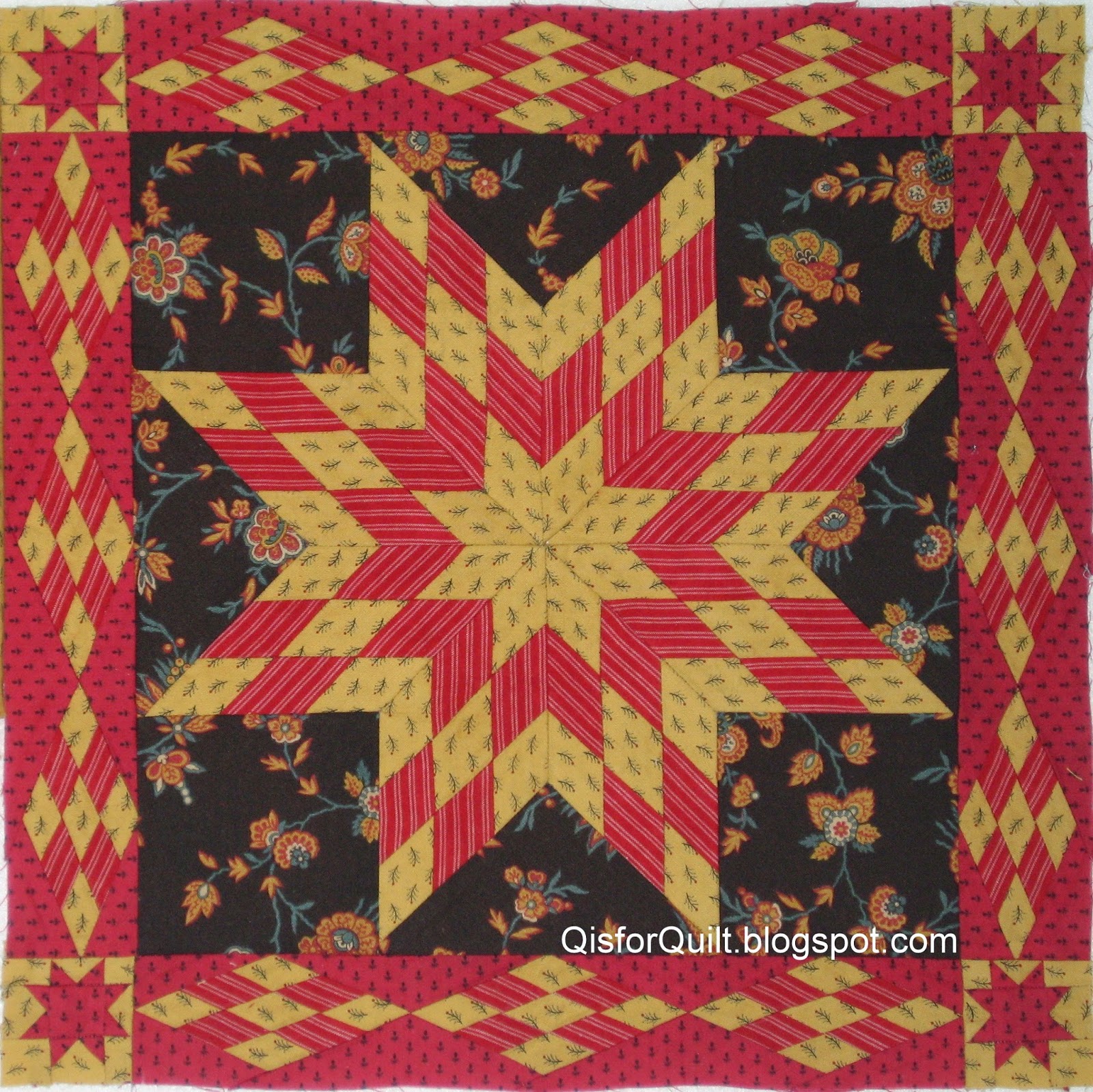 I think this is the last image you saw of it. Since then, I decided to take the borders off because the pieced diamonds were too wide by about 3/8 of an inch. I could have lived with it but the mistake would have just become worse with every subsequent border. 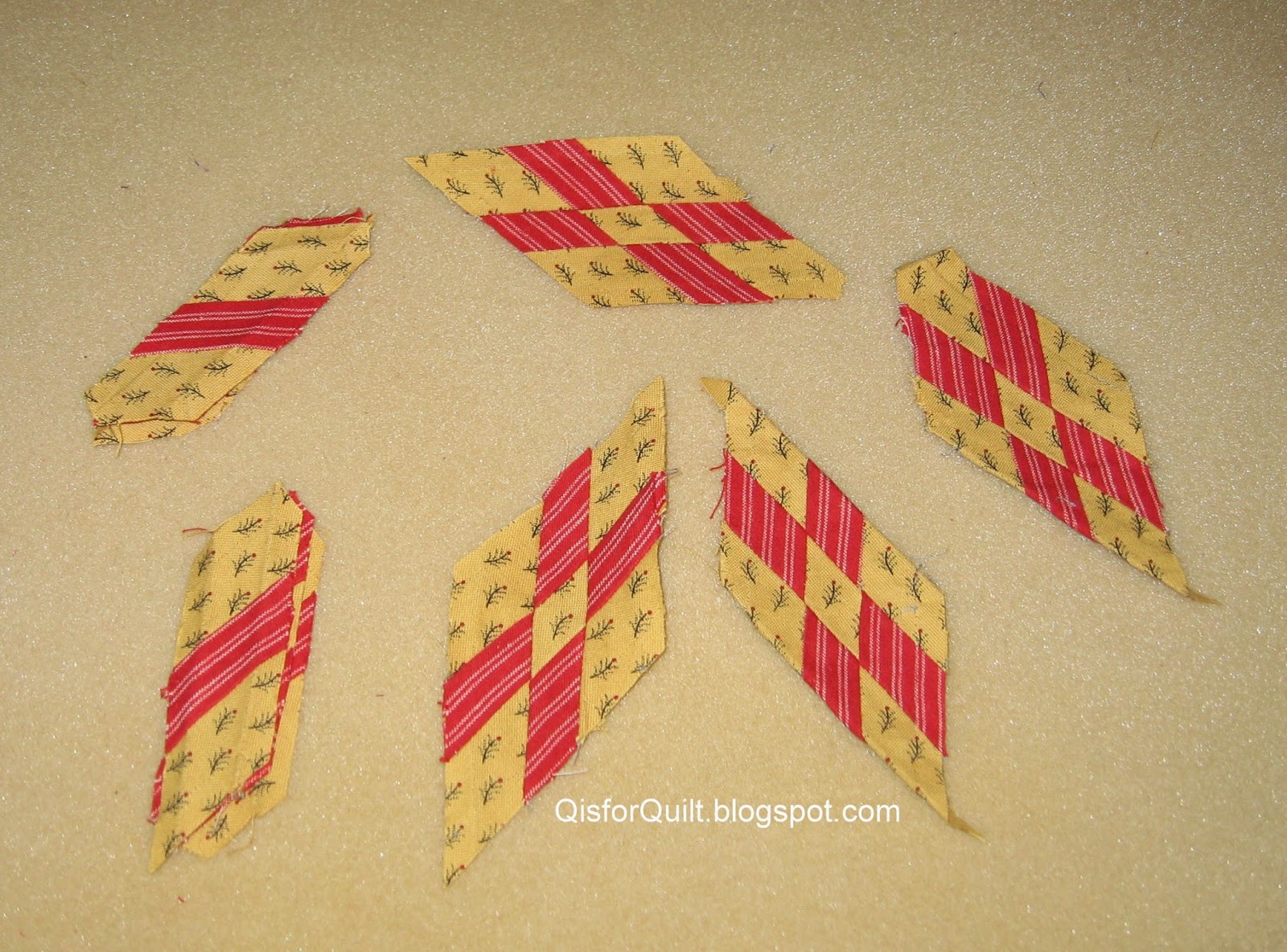 So, off they came and I experimented with sewing the seams in a tiny amount. 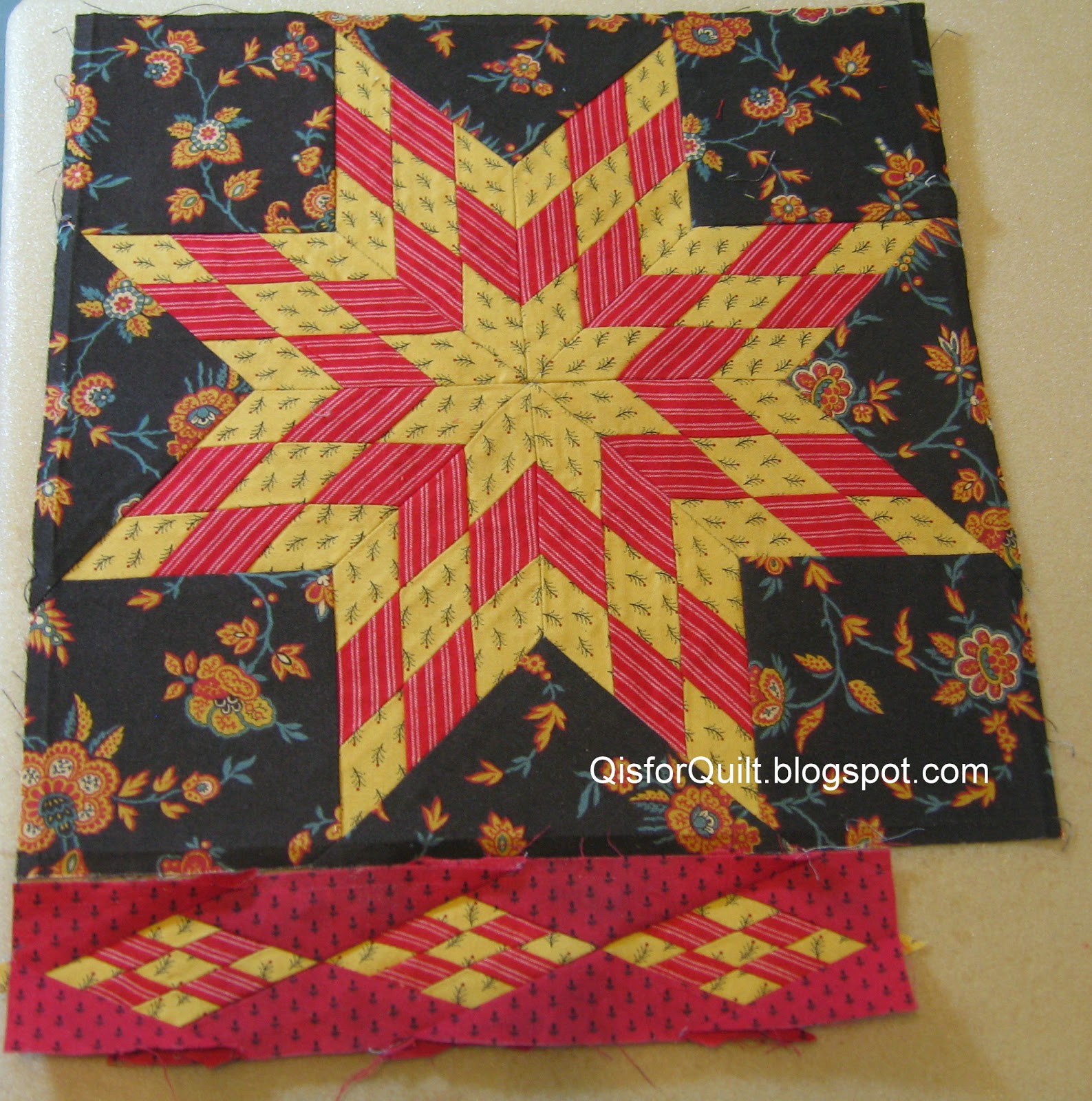 Here's one of the borders I thought I'd fixed. Not sure how I could have made such a big blunder! Its way too short and if you look carefully, you'll notice that I've scorched the fabric. I was so disgusted with myself because it meant looking for new border fabric to match the red in the star. 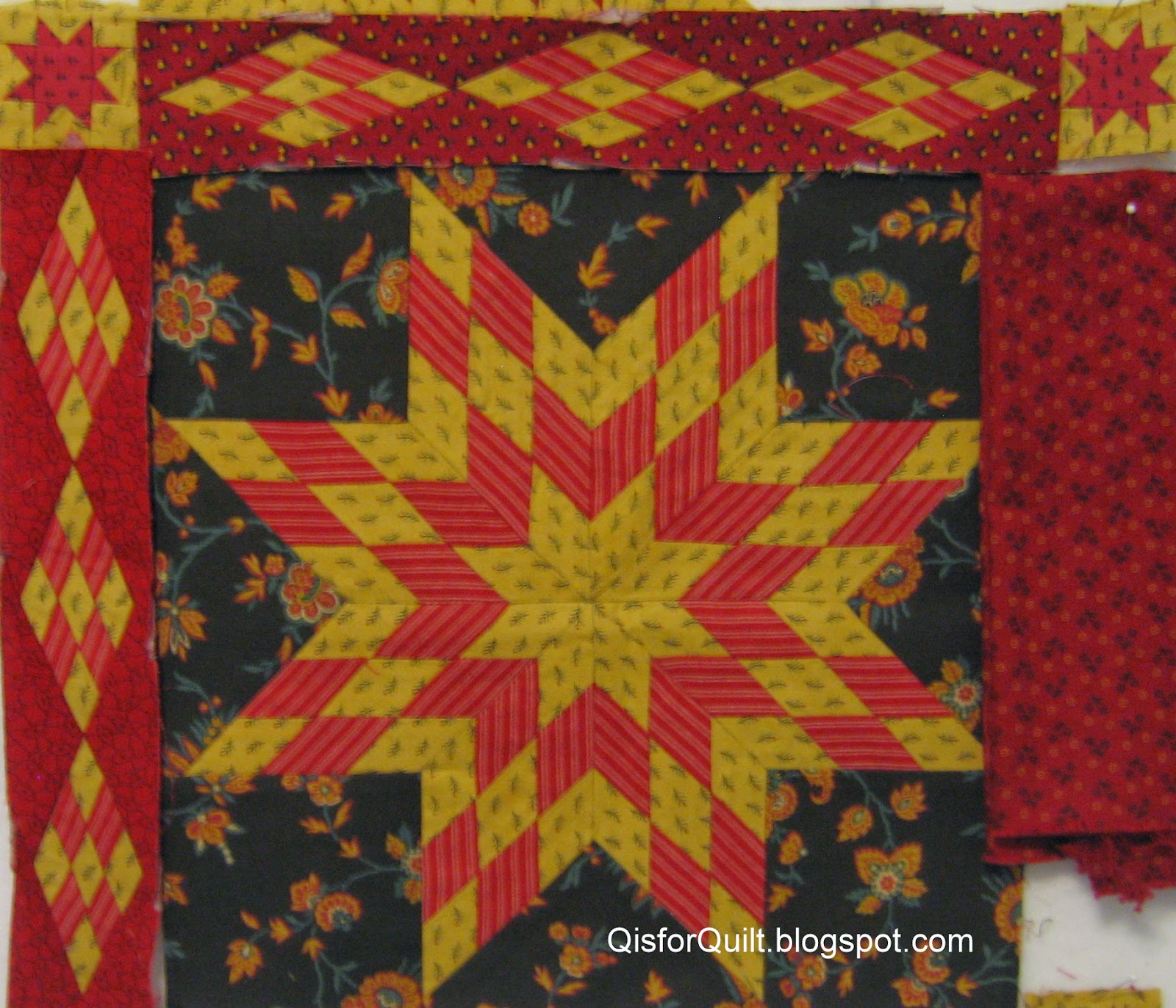 Border on the left - too bright red
Border on the top - too dark red and I don't like the bright yellow flowers.
Border fabric on the right - maybe it will work. I haven't had time to try piecing it yet.

Would the maker of the original quilt struggled with this? Probably not. She would have just used what she had but not me. 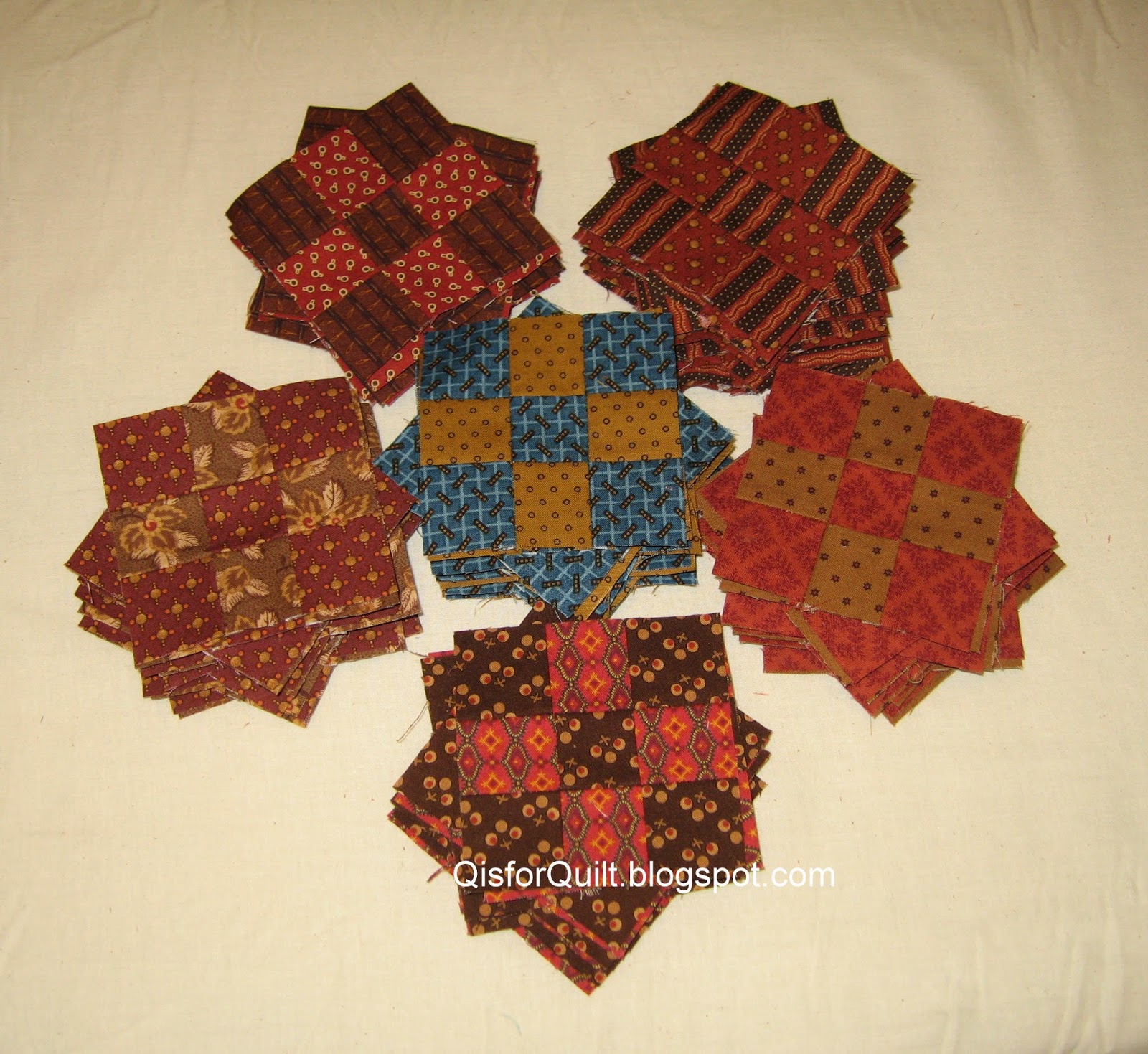 About this time, I was reminded that way back in early summer I signed up for an online nine patch swap Barb is hosting.  With only 6 weeks to go, I hadn't even begun stitching the 100 3-inch nine patches yet! So glad I was able to put them in the mail to her last week. 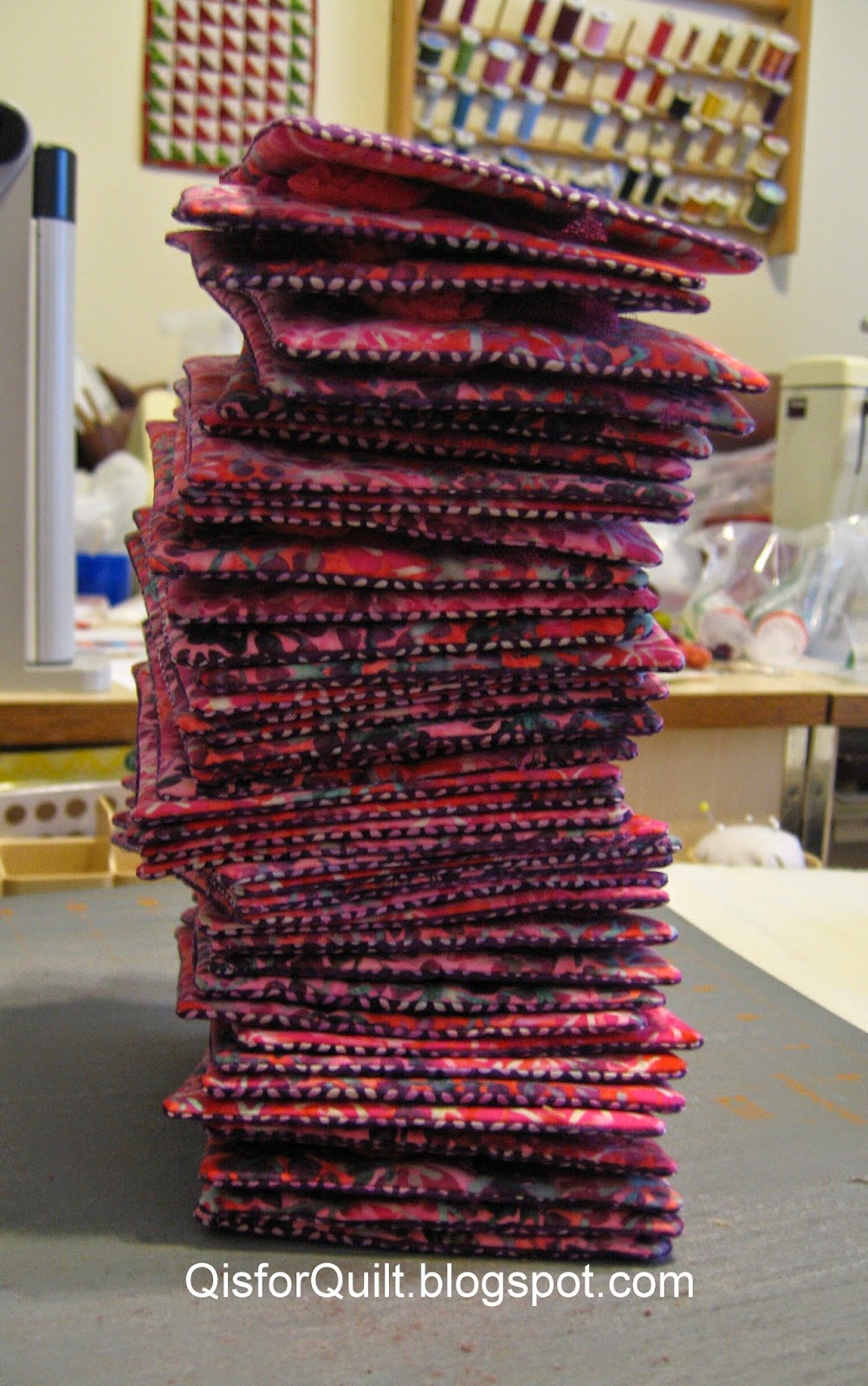 However, my ultimate craziness happened when in a moment of weakness I agreed to be president of our quilt guild, Prairie Quilt Guild for the next fiscal year. Since then I've been immersed in details, meeting board members, appointing committee chairs and realizing how little I know! Traditionally the president makes name tags for her board and committee chairs and the picture is a sneak peek at all 40 of them.

OH yes, other big news. Two of my quilts were juried into the AQS Des Moines show coming up October 1-4!

"The Cotheals at Home" (Phebe) and the "Selvage Star of Bethlehem" will be there and so will I! Looking forward to it very much.

One last thing. Our son and his family are staying with us during his job search. Tell me this, where does a two year old get all his energy and can I get some!?!

Until next time, Mayleen
Posted by Mayleen at 1:10 PM 5 comments:

Labels: Competition Quilt, Mustard and Ketchup, nine patch swap, Phebe, Prairie Quilt Guild, Selvage Star of Bethlehem, The Cotheals at Home
Newer Posts Older Posts Home
Subscribe to: Posts (Atom)
When I stand before God at the end of my life, I would hope that I would not have a single bit of talent left, and could say, 'I used everything you gave me.'