Did you celebrate "Thread Your Needle Day"? I had great plans to stitch but my day took a different direction. Instead I ...

- Noticed the dirty French Door on our deck, wrestled water hose up deck, got water on deck chair cushions, spooked cat who then scratched my hand. Realized door is no longer sealing very well when I came inside and found water all over the wood floor.

- Delivered food, bought straw bale and even remembered the tarp to keep straw from attaching to everything in vehicle. Put straw around rhubarb plants. I'm sure the neighbors wonder why the only thing in my garden is rhubarb. Sometimes I wonder too.

- It was hot and humid so I came inside and went to my sewing room where I  felt guilty about Phebe so I trimmed and squared Ohio Star units. Somehow was only able to finish 6 of them but the end is in sight! 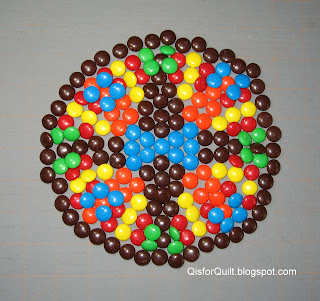 ﻿Anyone want to guess what the above is or shall we just say I was out in the sun too long? LOL 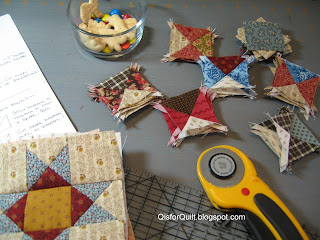 Here are the Ohio Stars for Phebe in process. I finished these this morning and only have 14 more to make! After making 66 of them, 14 is so doable.
Yesterday evening, I also began to applique the 6 petal flowers on LE. I guess I did some stitching afterall!
﻿
Until next time, Mayleen
Posted by Mayleen at 1:04 PM 5 comments:

Did you know Thursday is Thread the Needle Day?

I had no idea. Google it. Thread the Needle Day is July 25.

Does this mean that there will be chocolate? I can hardly wait!

About threading needles, I've realized I can't eyeball the thread into the needle anymore so I use my lime green Clover Desk Needle Threader. I've gotten so used to it that threading needles without it is a challenge! 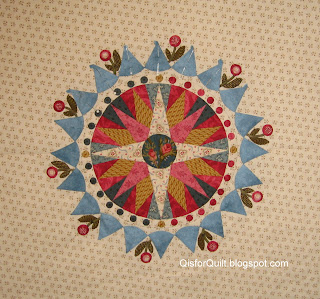 Here's how far I am with the Love Entwined BOM. Some of my poor triangles have hooks on their ends and I'm contemplating redoing them but most definitely only the pointy ends. I hate redoing anything so have to talk myself into it first. I've got 6 1/2 triangles left to stitch down and all the flower centers which are just glued down now. After that, the flowers and borders but I'm trying not to think too much about the border yet. One bite of the elephant at a time.

Yes, the blue fabric is growing on me!

Until next time, Mayleen
Posted by Mayleen at 2:47 PM 12 comments:

After spending the last ten days with my mom in the hospital, I am ready to work on Love Entwined. While I sat with her, I embroidered on the center panel of Phebe but am ready for a little break from it and really would like to stay current on Love Entwined.

Sewing/quilting has always been a stress reliever for me but right now, its causing a little more stress in my life. Unfortunately, I am not liking my color choice for the blue triangles around the compass. Even my husband thinks they look too bright. What do you think? 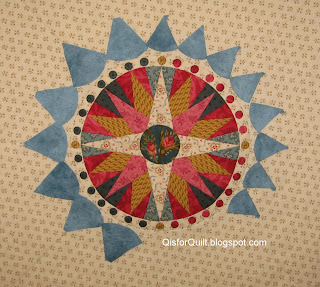 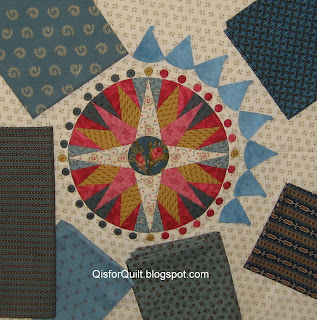 The only fabric that's really speaking to me is the upper right hand fabric but I think it may be too dark.

So, I'm open to suggestions. Use the bright blue, use one of fabrics from my stash or keep looking? 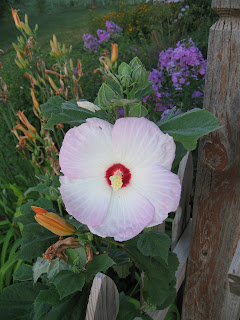 I confess, once I saw it I could not let it be. 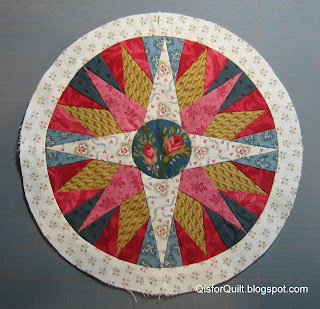 Love Entwined BOM - Part 1
This is my first ever Mariner's Compass. Its paper pieced and the flower circle and the ring were appliqued on top. Still need to make 32 circles measuring 5/16" to stitch in the ring. I don't have that size circle template so am looking around the house to see what might work. ﻿Part 2 will not be out until July 15. If you'd like more information about this free BOM, go to Esther Aliu's blog. This is her version of a 1790 marriage coverlet made in Great Britain. 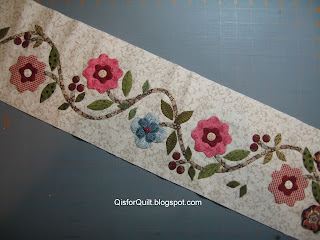 I'm not forgetting Phebe! Here's my progress on the right border. The small petal flowers are yet to come plus one large flower and all the embroidery. I think the back basting technique helped me make the leaves tips more pointed so I'll be using that technique again.

For all of you celebrating the July 4th holiday,
have a safe and happy celebration!﻿
Posted by Mayleen at 2:19 PM 7 comments:

Labels: Love Entwined, Phebe
Newer Posts Older Posts Home
Subscribe to: Posts (Atom)
When I stand before God at the end of my life, I would hope that I would not have a single bit of talent left, and could say, 'I used everything you gave me.'