Remember the sunflower hint for the give away? Well, scratch that as life happened and my idea for the giveaway didn't work out. Instead, this picture is a clue about what will be given away! No, you're not entering to win a bushel of wheat. Sorry. 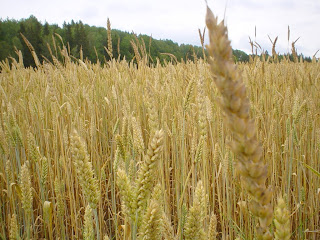 I'll be posting about the prize Friday morning or early afternoon so check back then. You are eligible to enter my giveaway by leaving a comment on tomorrow's blog post. In your comment, you must tell me what your favorite or least favorite cleaning chore is and why. If you'd like to become a follower, that would be great but its not a requirement to enter.

Its been a crazy week here and tomorrow will probably be more of the same. I'm scheduled for my annual stress test in the morning and then need to finish doing some deep cleaning.

Does anyone else remember being taught in school back in the 1960's that by the time we were grown up, there would be self-cleaning houses? I keep wondering what happened to that idea! Today I cleaned the entry way, living room, staircase woodwork and part of the dining room. My least favorite "serious cleaning" job is cleaning the wood blinds and I cleaned six of them too. Husband just got done shampooing the living room and dining room carpet.

Remember, check back on Friday and leave a comment on Friday's post about your favorite or least favorite cleaning chore to enter my giveaway!

It seems that I brought home something from our trip besides good memories - a stomach bug. Ick. I think I'm finally on the mend and trying to catch up on life around home! 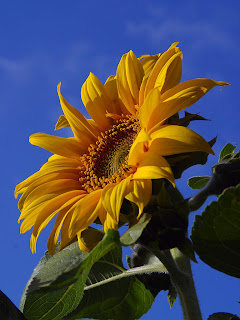 Remember the Fall into Fall giveaway? My prize will involve something similiar to what's in this photo. Be sure to check back on October 1 for all the details! Maybe a few more hints along the way.
Posted by Mayleen at 8:53 PM 4 comments:

Its the Fall Into Fall Quilters Blog Giveaway! Follow the link to Debi's blog to read all about it and see the other participating giveaway-ers. I'm sure that's not a word but that link is where you'll find links to all the bloggers who are hosting a giveaway. If you're a blogger and would like to be part of the giveaway, join the rest of us and sign up too.
You'll have to wait until October 1 to enter but I'll be giving you hints about what my prize might be and establishing a few rules too. The drawing will be October 15. Why does that sound so far away but yet I know its just around the corner?!?
Posted by Mayleen at 5:00 PM 1 comment:

The newlyweds: our son and his wife - 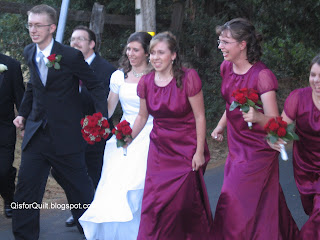 Brendan & Megan Vinson
married September 11, 2010
Nevada City, California
Our daughter, Micaela, is the middle bridesmaid.
... and now for just a few of our trip photos!
We decided to drive to California for the wedding and see some of the national parks and sites that we've always wanted to see. We were also trying to transport 10 pounds of frozen BBQ Brisket for the rehearsal dinner. If anyone needs tips on how to keep meat frozen for 10 days on a road trip, I can help you!
Hint: dry ice and the right way to pack the meat. 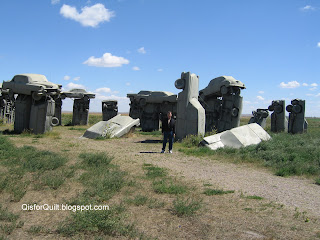 Okay, so this isn't a national park but we stopped to see Carhenge out in the middle of a pasture near Alliance, Nebraska. We'd heard about this place and when we saw the sign for it, decided to stop in. 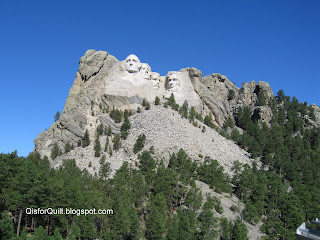 Mount Rushmore National Memorial
We took an all day bus tour that included Mt. Rushmore and the area. I was so glad neither my husband nor I were driving the road through the Needles Eye Tunnel! I'd recommend the bus tour if you're planning a trip to the area.
We also saw the Crazy Horse Memorial on the tour.

Right before we left, we realized we'd need more dry ice to keep the brisket frozen. Its readily available in our area at grocery stores and Wal-Mart so after many phone calls and starting to panic, we were surprised to find that its only available at one grocery store in Rapid City, South Dakota. If you're going to use dry ice, make sure you know where to find it before you leave home! 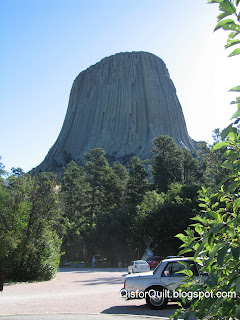 We made a short stop to see the Devils Tower National Monument in Wyoming, established in 1906. 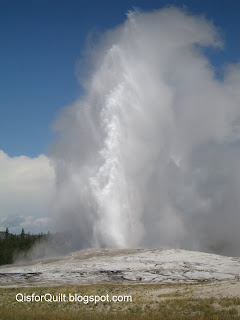 Here's Old Faithful Geyser erupting in Yellowstone National Park. We took the "Yellowstone in a Day" tour to get a good overview of the park and let someone else do the driving and parking. It was Labor Day weekend and the park was busy. 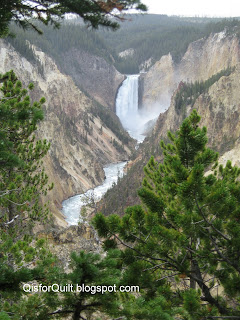 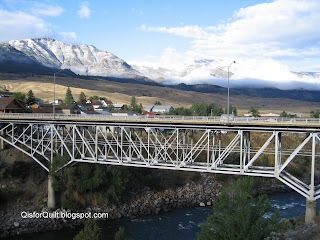 This was the view from our Gardiner, Montana hotel room one morning - snow on the mountains! At 7 AM the morning we left Yellowstone, Sept. 7, our SUV's thermometer registered 16 degrees. Brrrr. 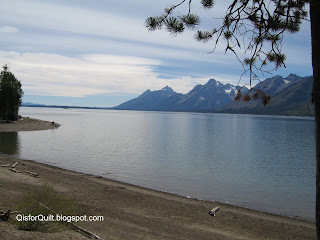 While we were at Yellowstone, we also took a short trip south to the Grand Teton National Park. Wish we could have explored more of this park but we ran out of time and began the final leg of the drive to California for the wedding. We stopped for a quick look at the Utah Salt Flats and were on our way again.

For those of you wondering, the BBQ brisket arrived in California frozen hard. I slowly thawed it, reheated it in a crockpot and it was enjoyed by the rehearsal dinner guests. 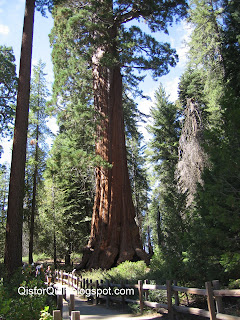 After the wedding, we drove to Kings Canyon National Park and Sequoia National Park in California. This is the General Grant tree, the third largest tree in the world. 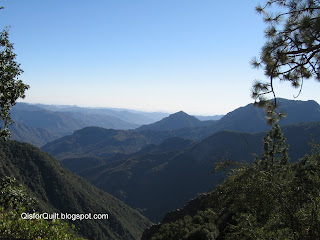 This photo is about where we noticed the SUV's brakes were overheating! If any of you have driven through Sequoia National Park, you may agree with me that some of the roads twist and turn a bit, especially for someone used to driving flat straight roads! The road was under construction and traffic was only let through on the hour so we parked and let the brakes cool. This was the beautiful view from our car while we waited to be allowed to drive on. 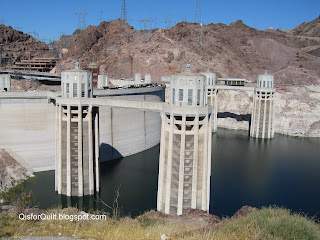 The next day we drove on to the Las Vegas, Nevada area where we saw the Hoover Dam. As you drive in, cars are stopped for a security check and we were wondering what the officers would think of the blanket draped load of wedding presents in the cargo area of our rental SUV. Apparently we have honest faces because after a few questions, we were allowed in. 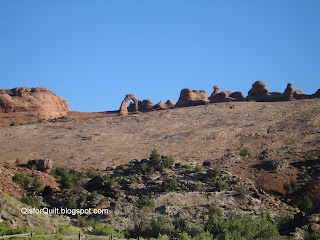 After staying at a "luxury hotel" for the night, our next national park was Arches National Park in Moab, Utah. By now, both my husband and I were tired so we just took a 2 hour driving/short walk tour of the park. This is a photo of the Delicate Arch.
We made it to the Colorado National Monument before my husband said, "I'm done travelling." Spent two more days in Denver before driving home, 18 days and about 5300 miles on the road.
I'm definitely looking forward to some quilting time soon but this week looks a little full so I may not get to blog or sew much. Check back again soon!
Posted by Mayleen at 11:14 AM 7 comments:

Labels: arches, carhenge, colorado monument, denver, devils tower, grand teton, hoover dam, kings canyon, mount rushmore, sequoia, wedding, yellowstone
Newer Posts Older Posts Home
Subscribe to: Posts (Atom)
When I stand before God at the end of my life, I would hope that I would not have a single bit of talent left, and could say, 'I used everything you gave me.'