My month of June

It's been far too long since I've posted but I think I've got a few good excuses!

Besides working like mad trying to complete my quilts for Prairie Quilt Guild's Common Threads Quilt Show, I've had a few interesting things happen. Everything from my mother's fall, hospitalization and eventually helping her move to the nursing home to having the brakes go out on our car while I was driving. I am all in one piece and trying to recuperate from the month of June! Hopefully, July will be better month because that's a special month for me! Details later. 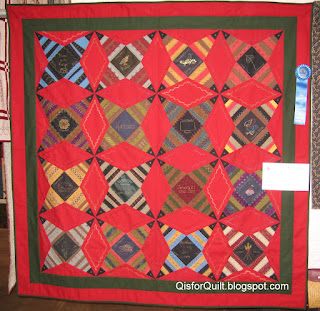 Here's my Rocky Road to Kansas embroidered quilt which won first place at the show in the "Other Traditional Quilt" class. Its inspired by an antique quilt pictured in a Crazy Quilt book I own. This quilt was made to showcase my home state of Kansas' 150th. birthday and each embroidered center block features a state fact, symbol or nickname. Some of them are our state bird, animal, amphibian and even the state soil which I had no idea we even had! 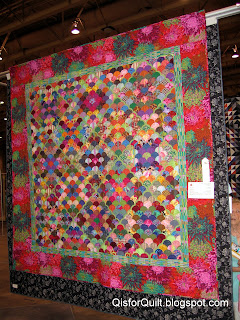 This is my clamshell quilt hanging in the show. It won third place in the Hand Quilted class.
And then came a surprise! 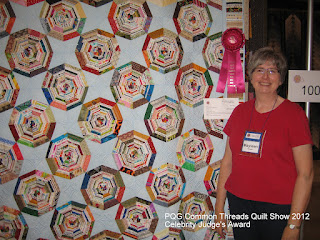 My selvage quilt, "The Parlour's Tin Ceiling" won one of the Celebrity Judge's Awards!
It wasn't entered into the judged portion of the show but it won a ribbon anyway. Thanks to anyone reading this who sent me selvages and thanks again to Jan who did the beautiful machine quilting!

Until next time, Mayleen
Posted by Mayleen at 2:30 PM 12 comments:

Labels: clamshell quilt, Common Threads Quilt Show, selvage quilt
Newer Posts Older Posts Home
Subscribe to: Posts (Atom)
When I stand before God at the end of my life, I would hope that I would not have a single bit of talent left, and could say, 'I used everything you gave me.'