I started a hexagon quilt project last fall because I just had to get it out of my system!
After viewing some cute hexagon projects on the internet and even though I really didn't need another project, I could no longer resist and started a copy of Anna Ruggles' hexagon quilt. Click here to see her quilt. 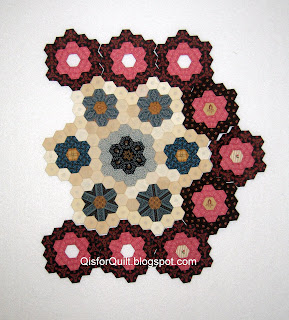 I don't know that my version will be that large, probably more like a wallhanging. When I get tired of making hexagons, that's when it will be done! I'm doing English Paper Piecing using 1/2 inch hexagons (the side measurement) which are actually starting to seem large to me. Also trying to limit myself to using only my Jo Morton fabrics except for the cream colored backgrounds.

This is another one of those long term projects so don't expect a lot of progress quickly. From time to time I'll show you how far I've gotten.

I'm still working on the inventory project for the Mennonite Heritage & Agricultural Museum and I had hoped to share a favorite quilt from their holdings today but instead here is an interesting lap robe we've found. 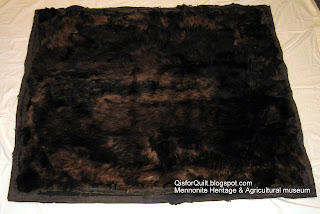 Was it a bison or a bear?

This sort of a lap robe would have been used in a carriage or buggy and is considered a transportation accessory in museum nomenclature. So far here in southcentral Kansas, we've had a mild winter but I don't think many of us can imagine what it must have been like to travel out in the open during winter! I'm so very thankful for modern conveniences.
Posted by Mayleen at 12:37 PM 5 comments: 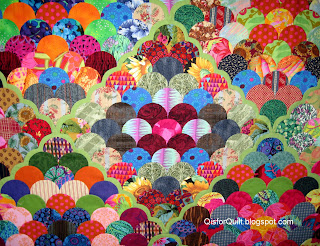 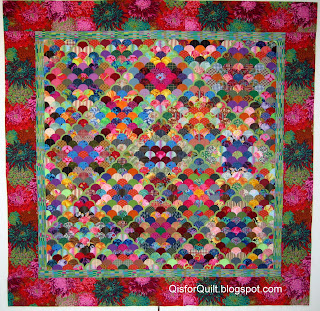 As my daughter put it, "Wow, the whole room got brighter!" Is that good or bad? Maybe our brown Kansas winter is getting to me.

When I started this quilt, I never envisioned that it would be quite this bright or colorful. Seems a little brighter in the photo than in real life but not by much. When its quilted and bound, I think I'll hang it in an area of our home that needs a little brightening up!

Still have much work to do on it but the borders are on. Quilting will have to wait as I have another project promised to someone which will have to come first.

By the way, my next project (already working on it) is in pastel colors (so far).
Posted by Mayleen at 5:07 PM 14 comments:

Staying Busy But Not Quilting 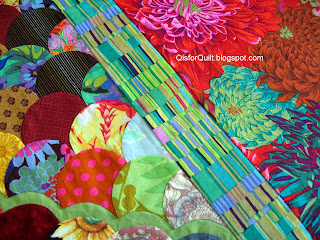 I wish I could say I'd been working on my clamshell quilt this past week but that, unfortunately, hasn't been the case. However, in the photo above you can see both the inner and outer border. I chose to use Philip Jacobs' Japanese Chrysanthemum in the scarlet colorway for the outer border but didn't have enough to match the pattern and had to order extra. My fabric order has arrived and I hope to finish hand sewing on the outer borders this week.
I haven't had the chance to work on my houses made from scraps project either. You might say I've been home-less for two weeks now. I'd like to spend a day catching up and working ahead but we'll see what my schedule will allow.
What I have been doing is creating a membership directory for Wichita's Prairie Quilt Guild. We have about 650 members to keep track of. I'm happy to say I finished the directory yesterday and tomorrow, unless something unforeseen happens, it goes to the printer.
I've also been volunteering for an inventory project at the Mennonite Heritage and Agricultural Museum in Goessel, Kansas. Goessel is a small town with a population of about 450 people. I grew up near there and thought that once I graduated from high school, I'd never go back. Ha, I'm the only person I know who will drive 50+ miles one way to dust and clean up old stuff!
Since I don't have much to show for quilting progress, I thought I'd occasionally show you something we find while doing the inventory.
Anyone know what's in the picture below? I remember it being used at my mom's sewing society meetings at church especially when they were working on mission projects. Occasionally when school wasn't being held, I went with my mom to her meeting and was put to work with this. Something is missing from the photo which would probably give away what it is. 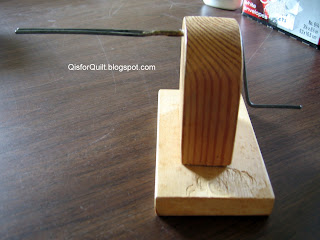 You can see the slotted metal spindle coming out of the wood to the left and a handle on the right. Its obvious that it may have been clamped to a table to make it more stable.

I'm sure most Mennonite girls of my era will recognize this as a bandage roller. Strips of clean white fabric and sometimes worn out sheets would be ripped to the correct width. Then one end of the strip would be threaded through the spindle and when someone turned the handle, the fabric rolled into a, hopefully, neat roll of bandage. I remember this being a two person job - someone to control the fabric and someone to turn the handle. The bandage rolls were then shipped to a missionary for use in hospitals or clinics. I don't think that bandage rollers are used by any of the sewing societies anymore so they've been donated to the museum.

We have found a few quilts and with the museum's permission I'll show you my favorite next week!
Posted by Mayleen at 7:40 PM 3 comments: 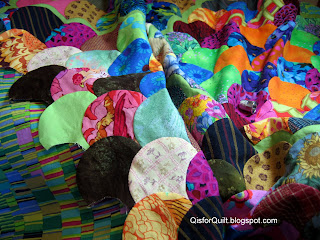 I'm stitching the clamshell rows together and then have some last fix it things to do on my clamshell quilt. You can get a peek of my narrow border choice to the left of the quilt top. The main border, not making an appearance yet, is quite colorful and bold.
Question - Should I soak the glue basting out before I stitch the borders on or afterwards? I can think of pros and cons of doing it either way but which do you readers think would be better? This is the first time I have ever glue basted and some of the glue has been in the fabric for months. 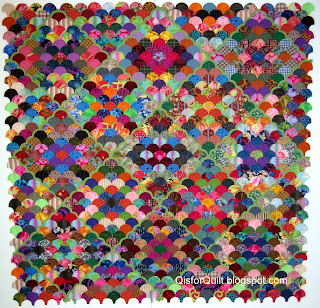 The body of the quilt measures about 65 inches "square". Because its so large and I don't want to distort the top, I plan to put an old sheet down in the bathtub and then fold the quilt on top of it before adding the water. Any words of advice?
Posted by Mayleen at 9:42 AM 1 comment: 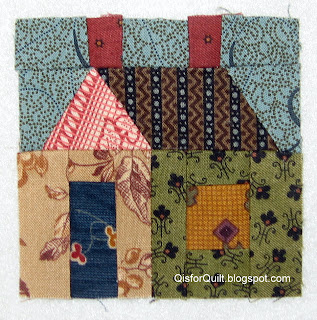 Here's my first house for Jeanneke's Houses from Scraps challenge! If you click on the button on the upper right hand column, you can read all about it.

I know some people are making one a day but my goal is to make one a week which is more doable given my schedule. This was my second attempt at the block and even then had to take it apart because I sewed the window flower in upside down!

Each little house finishes at about 3 inches and its a challenge to get used to working with such small pieces. A very good way to use up scraps though!

I've chosen to paper piece using old telephone book pages which I'm able to feed through our printer. Rather than tear each page out of the book, I took it to Office Max and had them do one cut as close to the binding as possible. Its a nice even page now although a little smaller than standard paper.
Clamshell update: I've sewn several rows together and hope to have the main body of the quilt top stitched together by next weekend. Pictures coming soon!
Posted by Mayleen at 10:07 AM 3 comments:

Labels: clamshell update, House
Newer Posts Older Posts Home
Subscribe to: Posts (Atom)
When I stand before God at the end of my life, I would hope that I would not have a single bit of talent left, and could say, 'I used everything you gave me.'