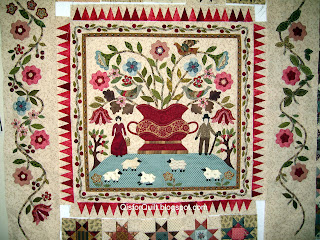 I've been working on my version of Phebe lately. Decided I needed to buckle down and just do it and ... well, Jan (the machine quilter) is holding me accountable under threat!

I finished the main applique portion of the left side border and am now working on the leaves in the right side border. I've decided to try the back basting technique which is working better but the small leaves still seem to be pointy in their middle sections. Room for improvement, for sure.

Even though I would dearly love to work on them, the selvage quilts and the Pine Burr quilt will have to wait until I've caught up on Phebe. My mother has not been doing well lately and my quilting time is limited. Hopefully, a medical solution has been found for her and my schedule will return to "normal" soon.

Claiming my blog in Bloglovin', whatever that means for whatever reason!

Postscript - I did something, have no idea if I did it right. This has been one of the most frustrating experiences I've had on the internet.
Posted by Mayleen at 7:26 PM 4 comments: 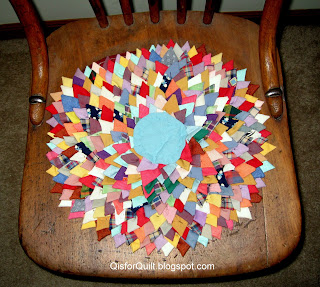 Now that I'm making a Pine Burr quilt, I've found several pictured on websites and in magazines but I'd never seen a Pine Burr project in person until last week. I found this Pine Burr pillow cover in a local antique mall.﻿ 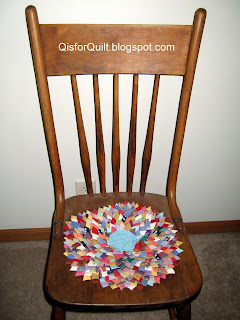 Its stitched by hand and the burrs seem narrow and more pointy than mine. It looks like the maker folded her fabrics in thirds to get this effect. The fabrics are mostly apparel fabrics, possibly even a man's tie, with some cottons.

Today I've been making more burrs for my Pine Burr project. It takes a lot of them to make a block, usually around 150! ﻿I'm especially trying to use up some of my older fabrics. 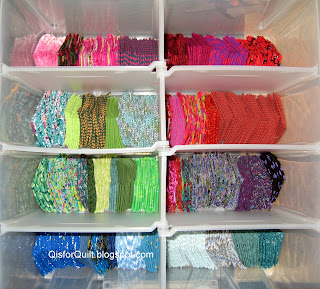 Until next time, Mayleen﻿
Posted by Mayleen at 3:24 PM 2 comments:

I'm so thoroughly confused! Could someone please explain why I need Bloglovin or Feedly or whatever for my blog? Unfortunately, I'm not good with changes in technology, preferring to live only on the creative side of life! 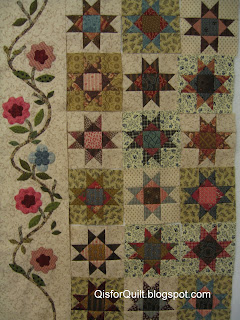 Its becoming more and more difficult to motivate myself to work on Phebe. I think its because I don't like the quality of my work. I've been working on this one border for several weeks now and today I forced myself to finish the leaves. I also made 7 Ohio Star blocks, only 28 more to go.

To help get myself back on track I made arrangements to have Phebe custom quilted by Jan in fall, possibly as early as September. I know Jan through Prairie Quilt Guild in Wichita and she'll do a wonderful job on Phebe. I just hope she doesn't laugh when she sees my applique, sigh.

﻿So, I'm going to have a deadline breathing down my neck! That will be motivation, I'm sure. I'm also going to blog about Phebe every Friday so if you notice I'm not around, please feel free to keep me accountable!

OK, all readers - an addition to this post:
How do you motivate yourself to keep on working on a project when you'd rather discretely put it in a box and hide it in the closet?!? Suggestions gladly taken!
Posted by Mayleen at 8:47 PM 9 comments: 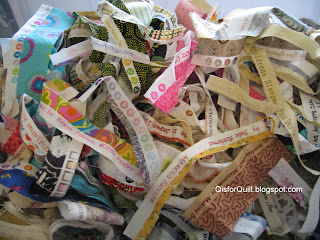 My selvage suppliers have been so generous this year that I've started two selvage quilts!﻿ 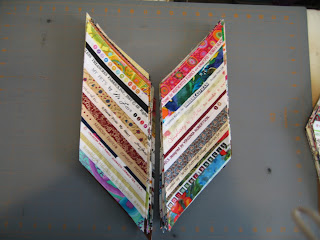 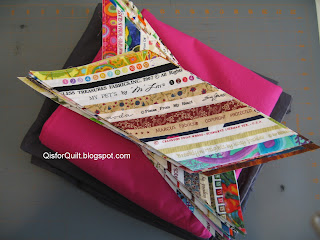 This one might be called modern except for all those repro selvages!﻿ I'd feel a lot better about making this quilt design if it would only rain. (That's a hint!) Of course, its name might also refer to another activity which, I believe, is against the law! 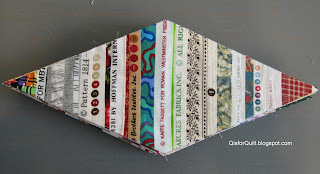 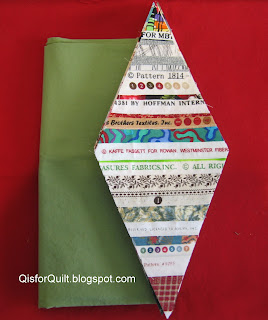 And this one will definitely be traditional. I saw the inspiration quilt on an antique quilt site. I've never made one of these before and it may be a bit challenging to put together.

Any guesses what these quilts will be?

Until next time, Mayleen
Posted by Mayleen at 4:54 PM 4 comments:

Remember, its just for fun! 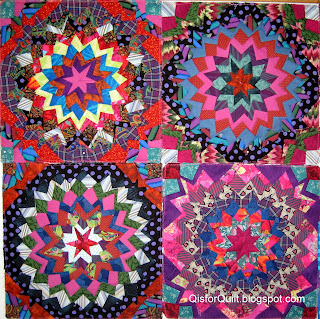 These are my Pine Burr blocks so far.﻿ I'm enjoying playing with the color combinations and using up some of my fabrics. Cutting and pressing the 3-inch fabric squares is a bit on the tedious side though. Looks like I need to plan for some time spent doing just that because I'm running out of triangles. I also need more variety.

My husband, well ... he just shakes his head and walks away, ha.
Some people just don't know how to have fun with color.
Posted by Mayleen at 12:35 PM 6 comments:

This week has flown by and the best news is that we received two inches of rain! When you're in a drought situation, that is very good news. For some reason, I get a lot more quilting done on rainy or overcast days. Not sure why that is but I hope we receive more rain to keep chipping away at the drought conditions and yes, so I get more quilting done. ha. 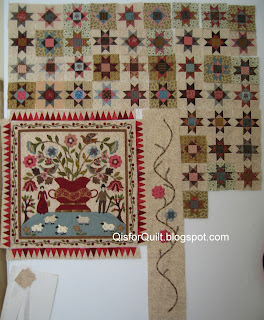 I spent some time with Phebe and made 20 more Ohio Star blocks, only 34 more to go! These are really time consuming blocks for me to make or perhaps I'm moving in slow motion. Also started the next applique border as you can see in the picture.﻿ I've been doing some embroidery on the center panel too.
﻿ 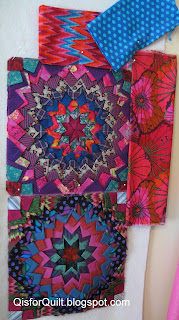 I decided that one day a week I will give myself permission to have some playtime so here's block #2 of my Pine Burr wallhanging. I'm trying to decide if the Kaffe Fassett fabric to the right of it would be a border possibility. Actually, I just really like that fabric and I'm trying to justify buying and using it in something!﻿ I do like the blue polka dot but not the chevron fabric. Of course, this may all change before I get the nine blocks done. Even though my daughter liked the first block, I highly doubt that my kids will fight over this quilt when I'm gone! 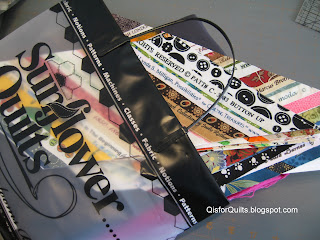 ﻿Yes, its that time again! Time to make a selvage quilt for my guild's 2014 quilt show. I've entered one in the past two shows and last year's won a "Celebrity Judge" award or whatever it was officially called! Anyway, I have a tub stuffed with selvages and I think I have finally settled on three design possibilities. Just one project will probably not use them up so it looks like multiple selvage quilt projects are called for. I'm beginning the first which will need longer strips of selvages and then want to make one of the two other possibilities. Any guesses what I'm making? Linda knows but I hope she won't tell!

PS - Sunflower Quilts, a traditional quilt shop, is the closest quilt shop to where I live. Its where I purchased the gray and pink fabric and I'm sure at least a few of the selvages came from there too!
Posted by Mayleen at 8:54 PM 5 comments:

Labels: Phebe, Pine Burr, selvage quilt
Newer Posts Older Posts Home
Subscribe to: Posts (Atom)
When I stand before God at the end of my life, I would hope that I would not have a single bit of talent left, and could say, 'I used everything you gave me.'