That's how slow progress has been on UFO #5. 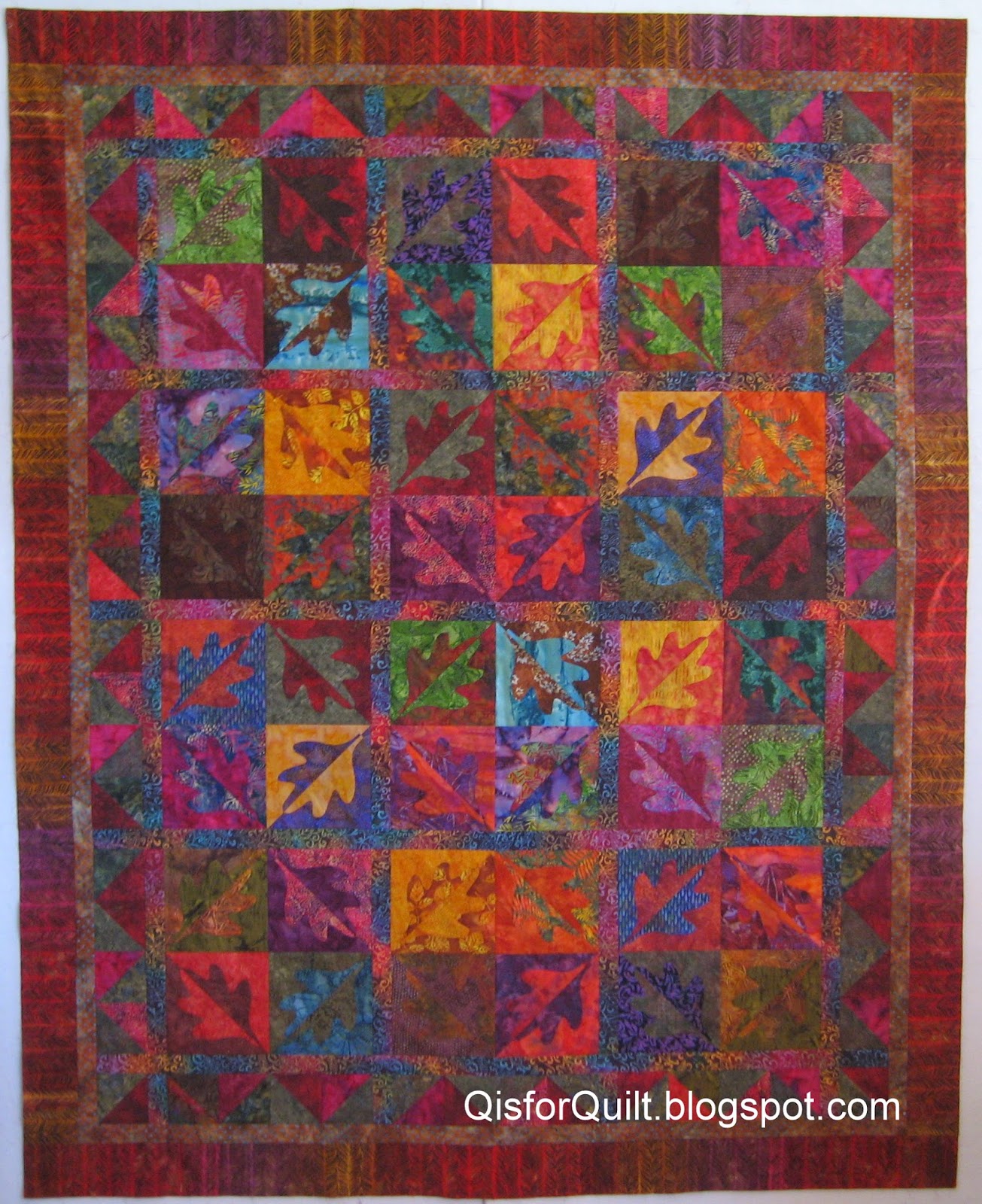 The top is finished and it looks a lot better than I thought it would. I really wish I'd taken a photo of the layout before piecing it though. I'm seeing too many dark blocks in the upper half. Definitely not taking it apart to move them around at this point! 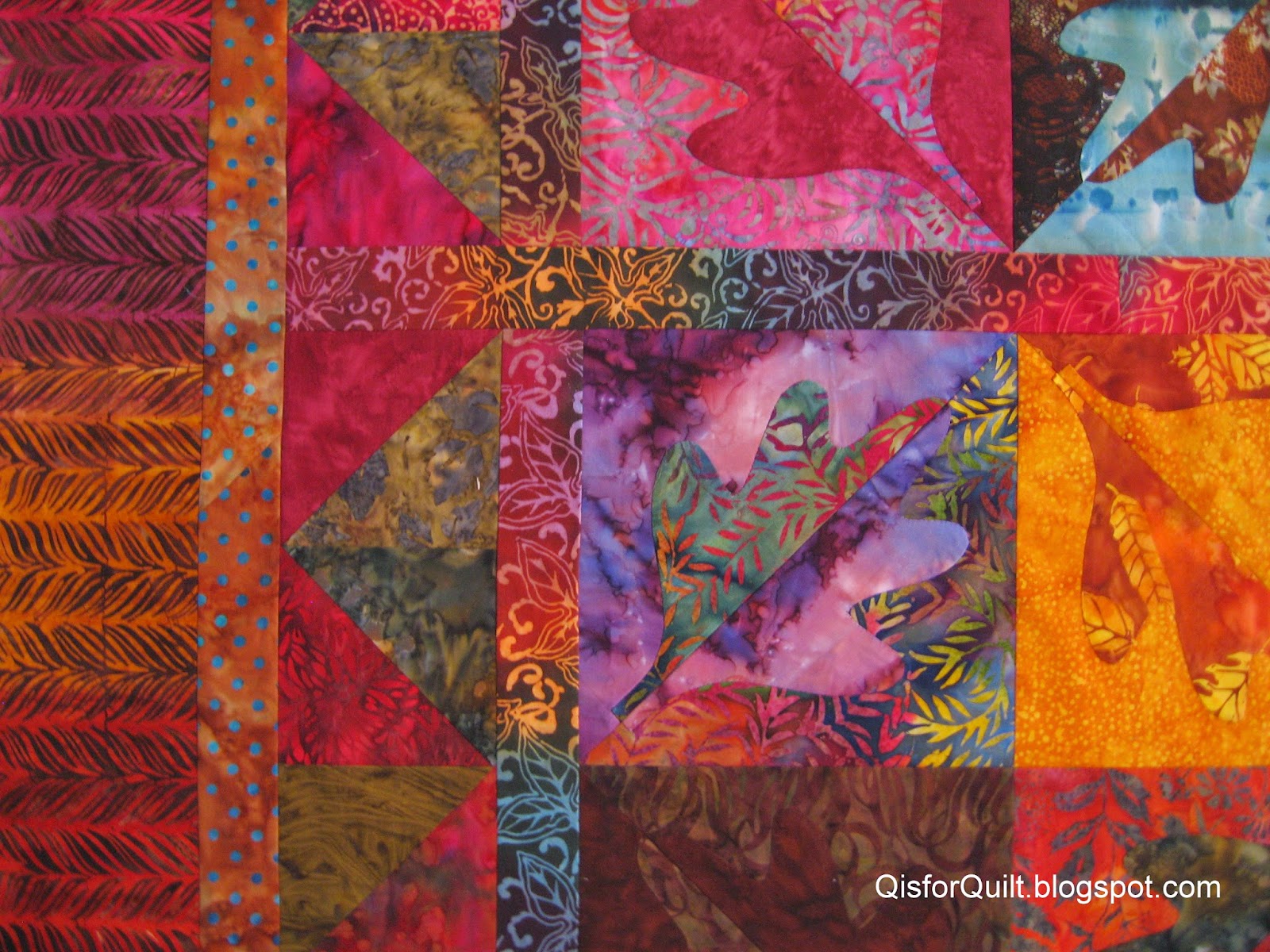 The reason this became a UFO was because I felt the colors of the leaves were all too different. However, the outer border fabric seems to pull all the colors in the blocks together. When I look at that fabric though, it reminds me of Zebras which reminds me of grasslands and a safari. I'm thinking of naming this quilt "Serengeti Oaks". 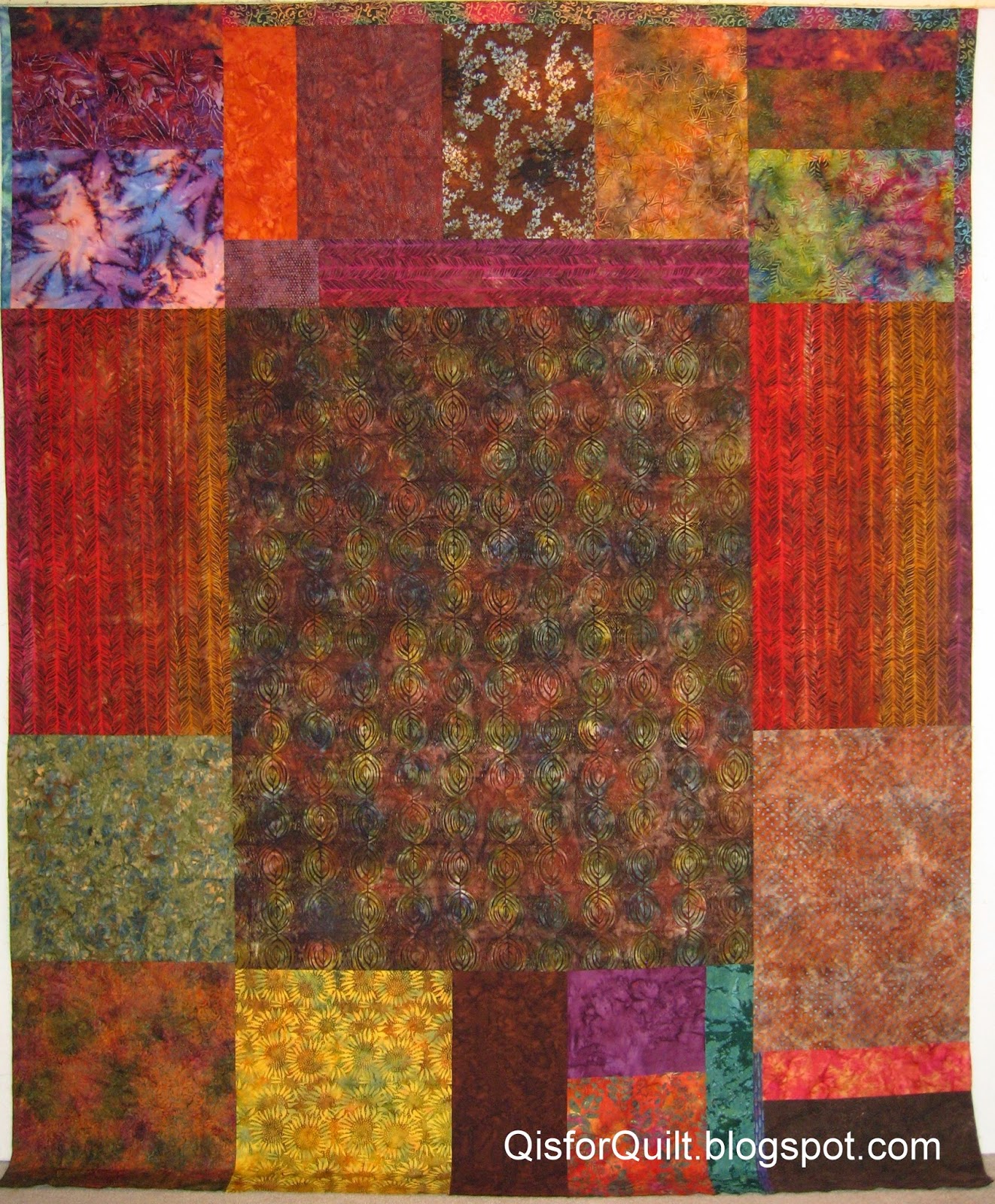 Can you believe I spent two days piecing this backing? I've never gone this crazy with backing but I didn't want to buy more yardage so I started piecing whatever Batiks I had together. Unfortunately, I mismeasured a few times and I had to add filler strips an inch wide. Piecing this took a lot longer than I thought it would but I did use up more of my fabric.

Now I'm looking for a machine quilter and its taking longer than I expected too. Eventually, it will all come together and the quilt will be finished. I'm just so ready to be done with it. 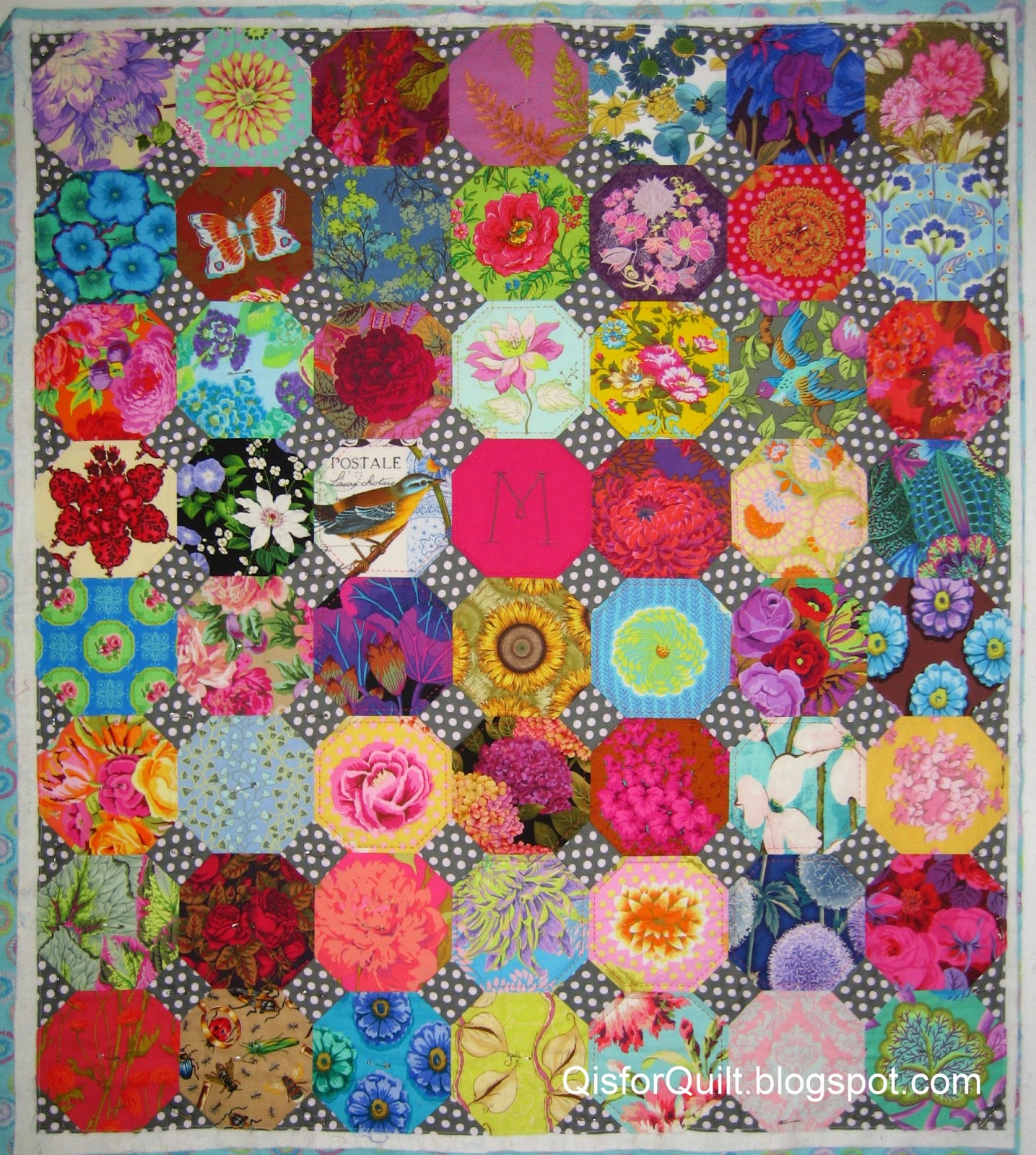 I've also been working on this UFO which I hope to have finished in July. At this point, I'm just doing some big stitch quilting in the octagons using orange Perle Cotton. I plan to embellish all the blocks with hand embroidery and am seriously thinking of adding a border. I just can't get used to it without a border.

Do you see the bird to the left of the initial "M"? I've decided that block has got to go because the bird just looks too different from the other blocks. He also looks like he's going to peck on my initial! I'm still thinking about what would be the easiest way to remove the bird block and add a new block. All the blocks are hand pieced and I may applique the new block in place.

Yesterday, I thought I'd take a break from Serengeti Oaks and thinking about the bird block so I started piecing our quilt guild's latest BOM block. I think I made a mistake at every step. For me, making a mistake is the best way to learn better technique. Time to go into my sewing room, turn on some music, maybe have some M&M therapy and try again!

Until next time when I hope to show you my bound Pumpkin Peel quilt,
Mayleen
Posted by Mayleen at 10:49 AM 10 comments:

I thought I was going to pick a more "modern" UFO to work on next but that didn't happen. None of my UFO's are really "modern", I'd call some of them contemporary but I didn't pick what I'd call a contemporary UFO either. I chose my current UFO project simply because most of the blocks were already finished! Before I tell you about my current UFO project, here's a teaser picture of my Pumpkin Peel UFO. Its back from the machine quilter and ready to be bound. I'm going to use the blue fabric at the top for the binding. 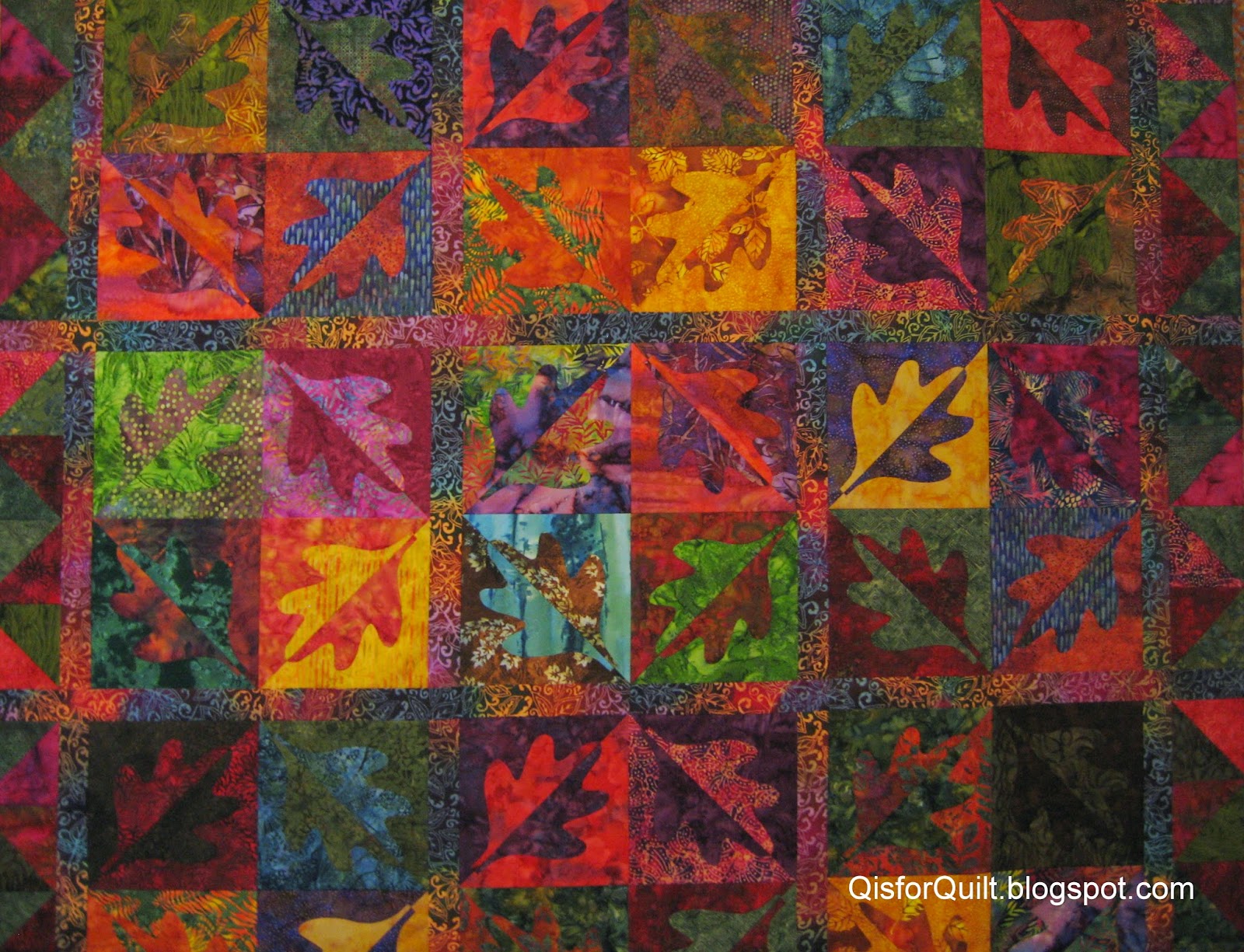 Are you ready for fall? For those of us in the northern hemisphere, we're ready for spring! This quilt called "Turning Leaves" was in the September/October 2002 Quiltmaker magazine. I don't remember when I started it but as I said, the leaf blocks were all finished and waiting for me. There were enough leaf blocks to make a twin size quilt so that's what I'm making.

I've stitched the blocks together and sewn the sashings on. With help from friends, I chose border fabrics, then preshrunk fabric, cut and pieced the narrow border. Today I seem to have come to a full stop, no stitching happening here.

Until next week, Mayleen
Posted by Mayleen at 4:06 PM 3 comments: 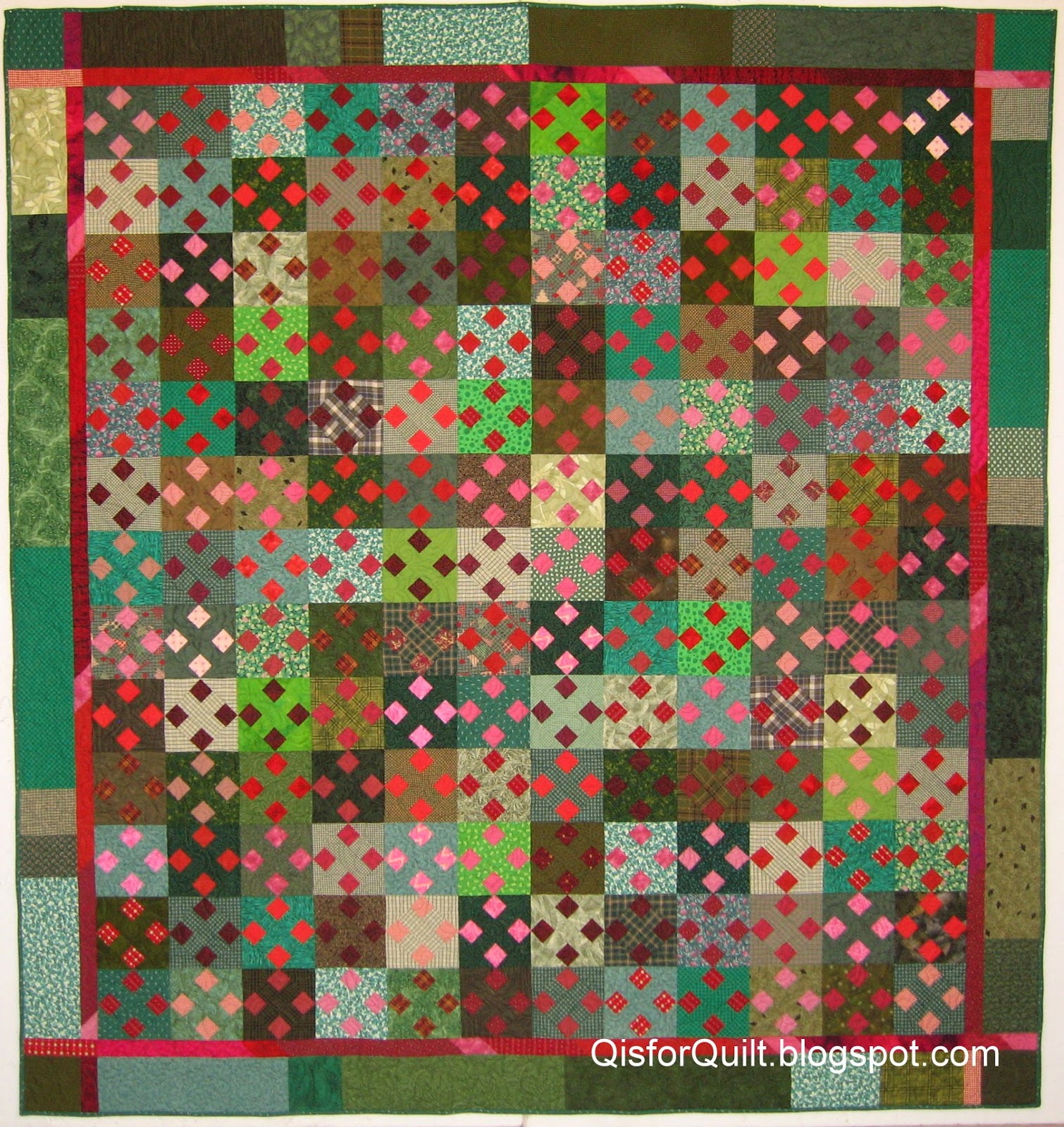 I shared my version of Bonnie Hunter's "Crisscross Applesauce" quilt at Prairie Quilt Guild's Show and Share yesterday. Sometimes I rename my quilts from the original pattern name and for this quilt I wanted to still have something apple related but also Civil War related. (I started working on this quilt in 2011, the 150th anniversary of the start of the Civil War.)

So I named it "Was Granny Smith a Northern Spy?"

A Granny Smith apple being green and the Northern Spy apple, a rosy or red color. To shorten it, I'll probably just call this quilt "Granny Smith"! 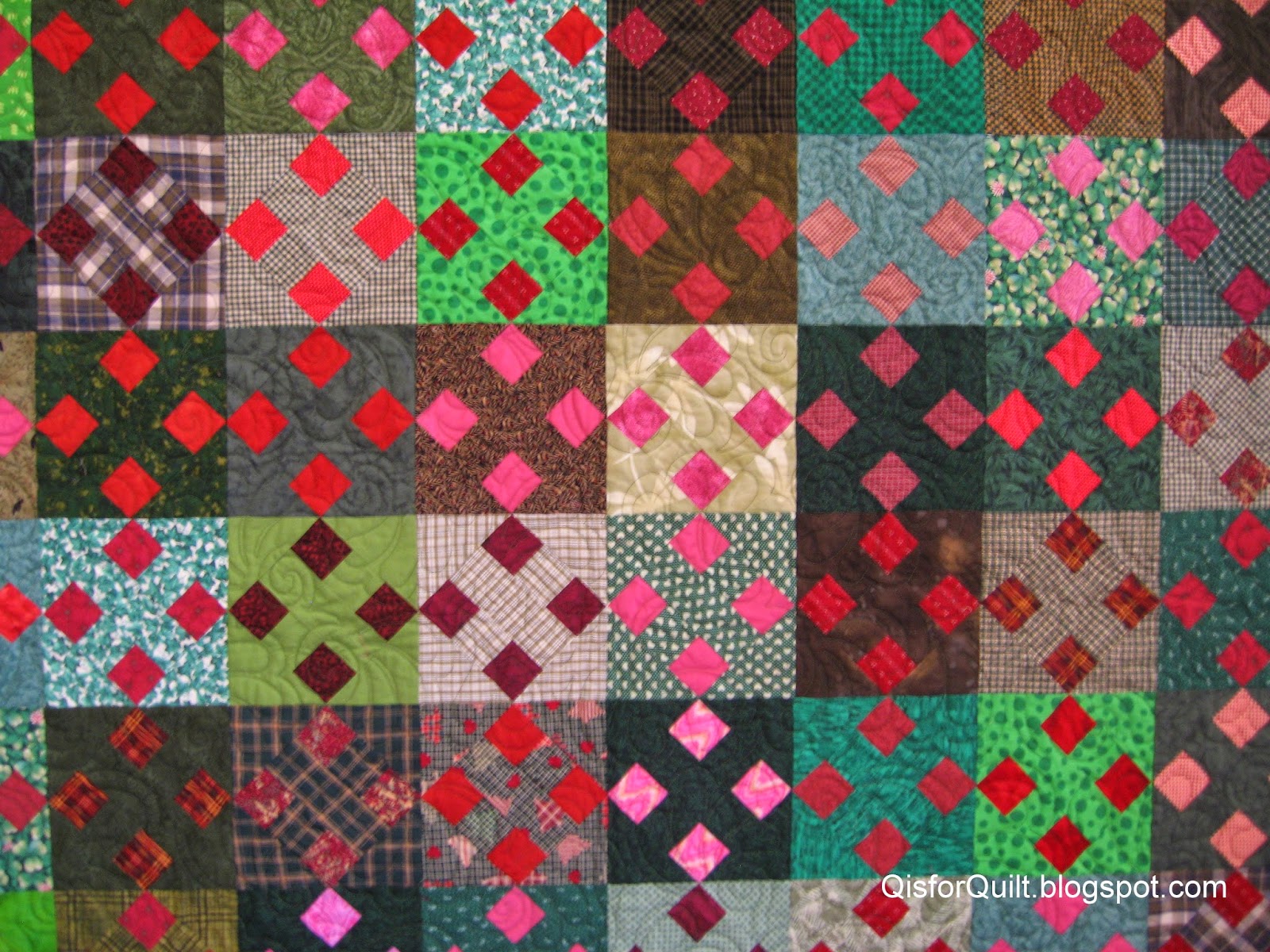 Trisha Lehman from our quilt guild did the allover machine quilting on "Granny Smith". 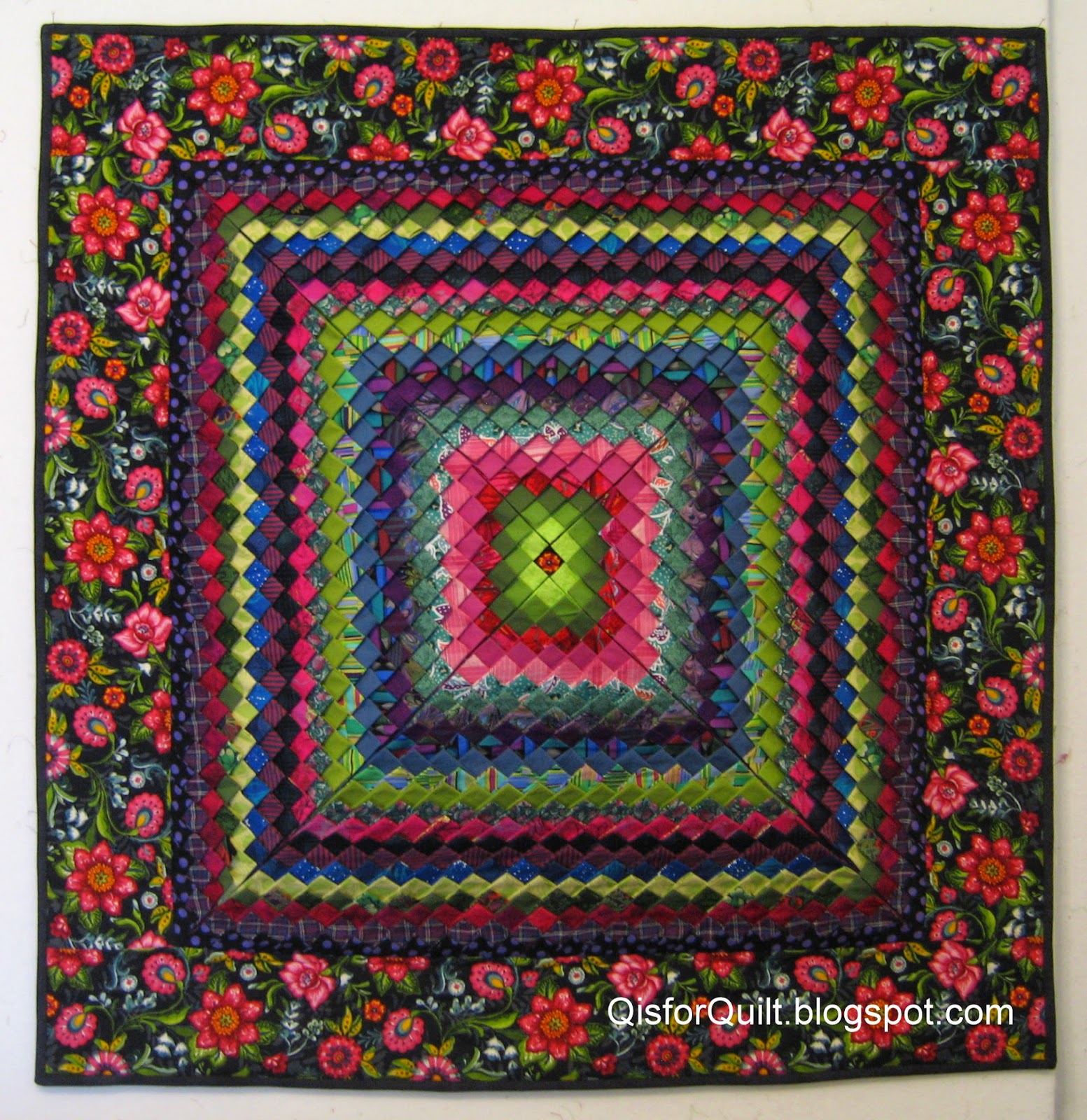 To catch up on UFO's -
"Trip Around the Prairie" is finished. I invisibly stitched the outer two rows of Prairie Points down so they wouldn't flop out and down as easily. The bottom border is still sagging and I may revisit it someday and then again, maybe not. Gravity happens. 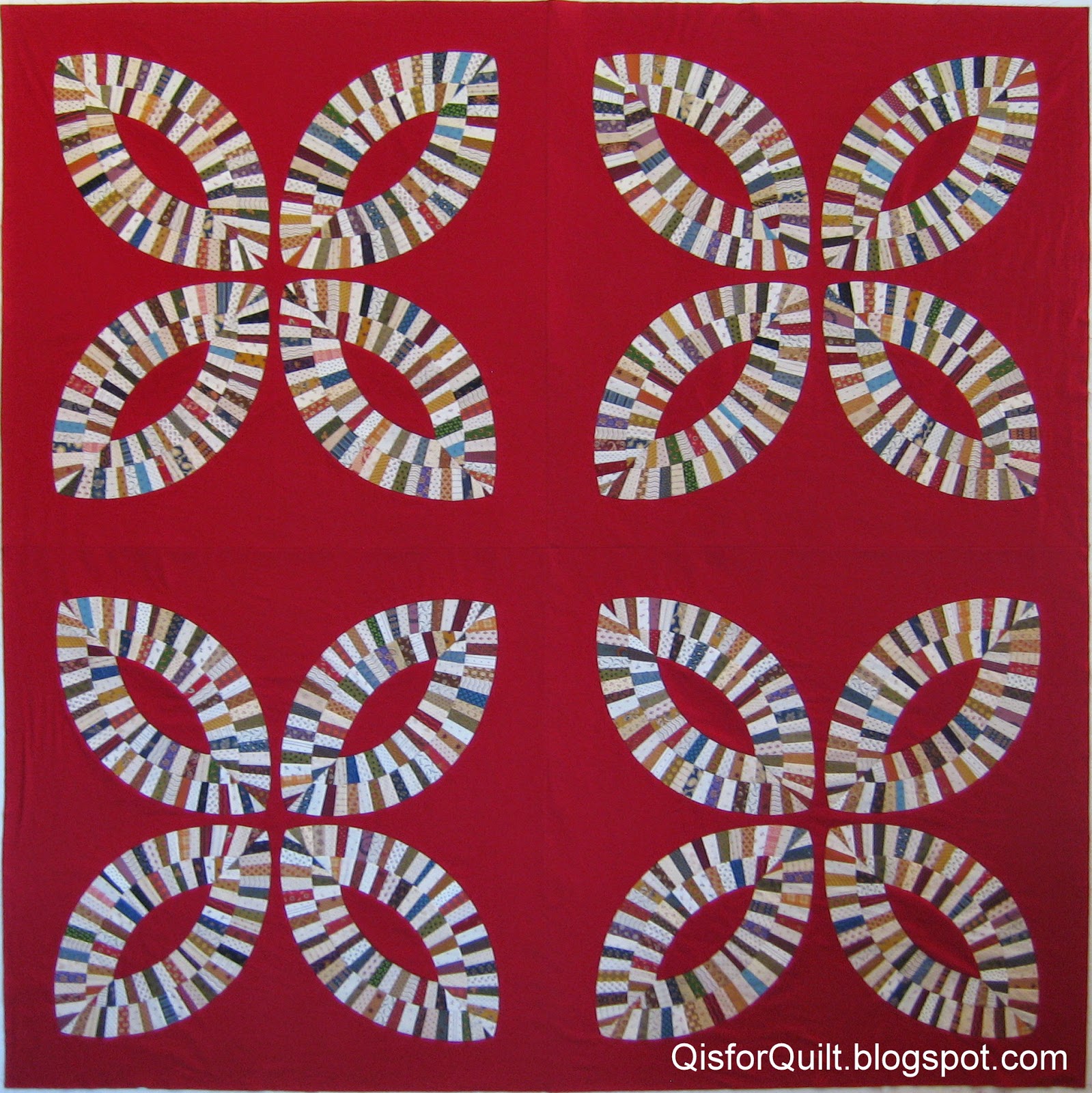 I also finished stitching the "Pumpkin Peel" top together and it went to the machine quilter yesterday. I'm looking forward to seeing what she does in the red background. "Pumpkin Peel" is from the book, "Small Pieces, Spectacular Quilts".

Even though I'd much rather start a new project, I'll decide on the next UFO to tackle later today. I'm fairly sure its going to be something a bit more modern!

Until next time, Mayleen
Posted by Mayleen at 11:13 AM 5 comments:

I am so close to finishing this UFO top! 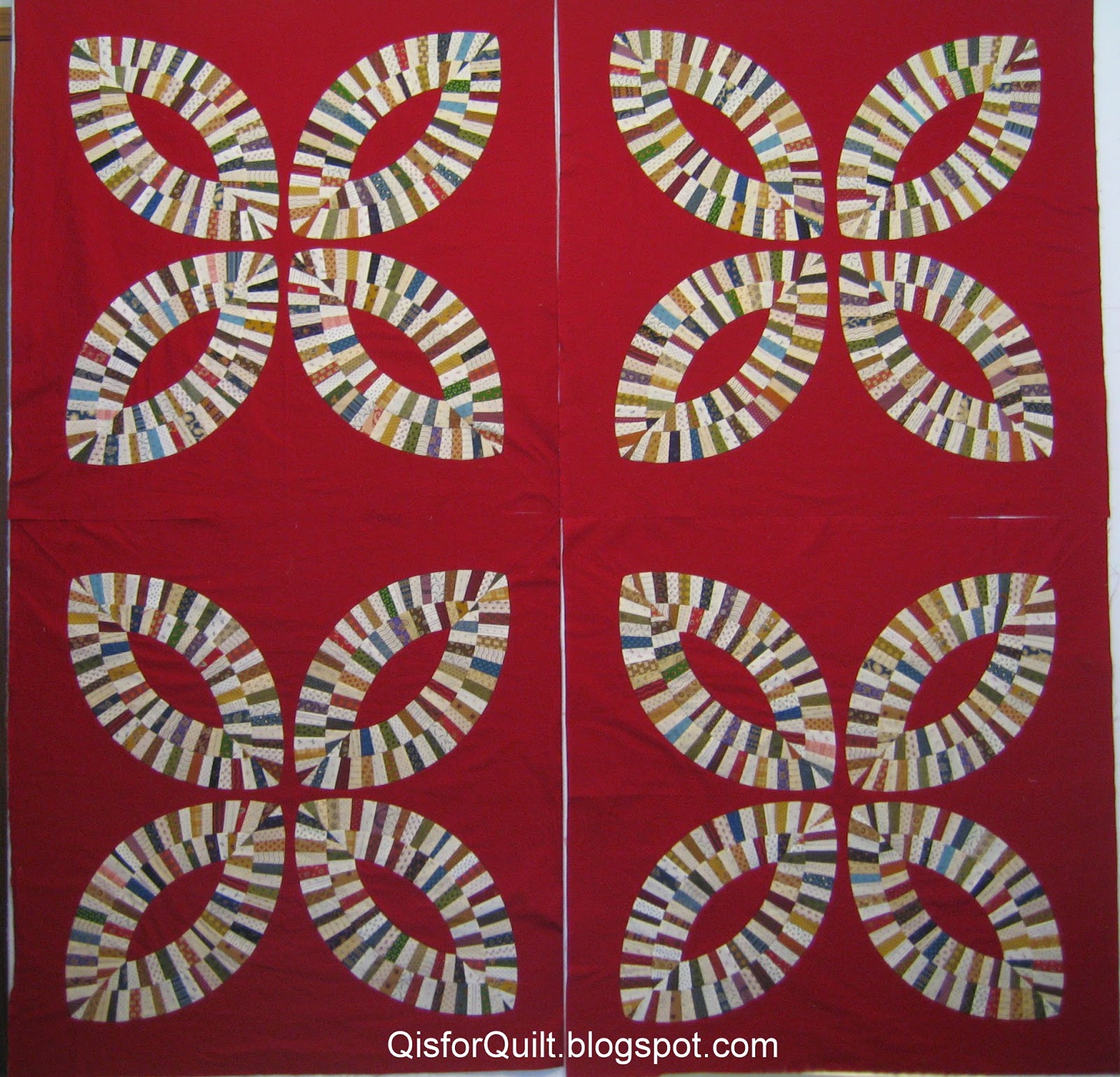 Today I finished appliqueing the last arcs onto the background. 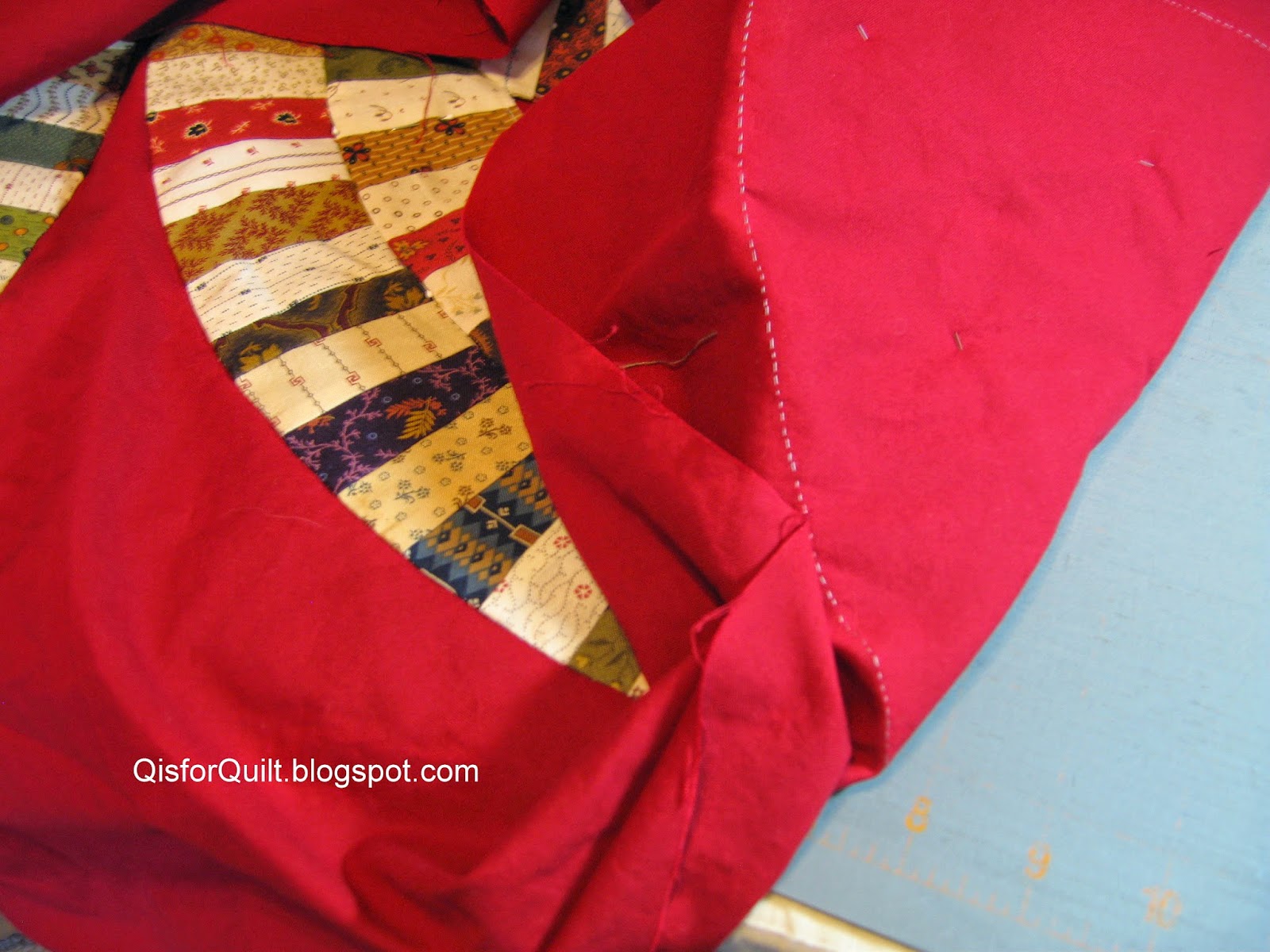 Tried to lay the block out flat and no surprise, I've stitched a fold in. I thought I was being careful but I guess not. In the past, I've appliqued blocks to my jeans and even to my finger once. Didn't even notice till I tried to put the block down.

It was a minor fix so I went on to fix a few other things. 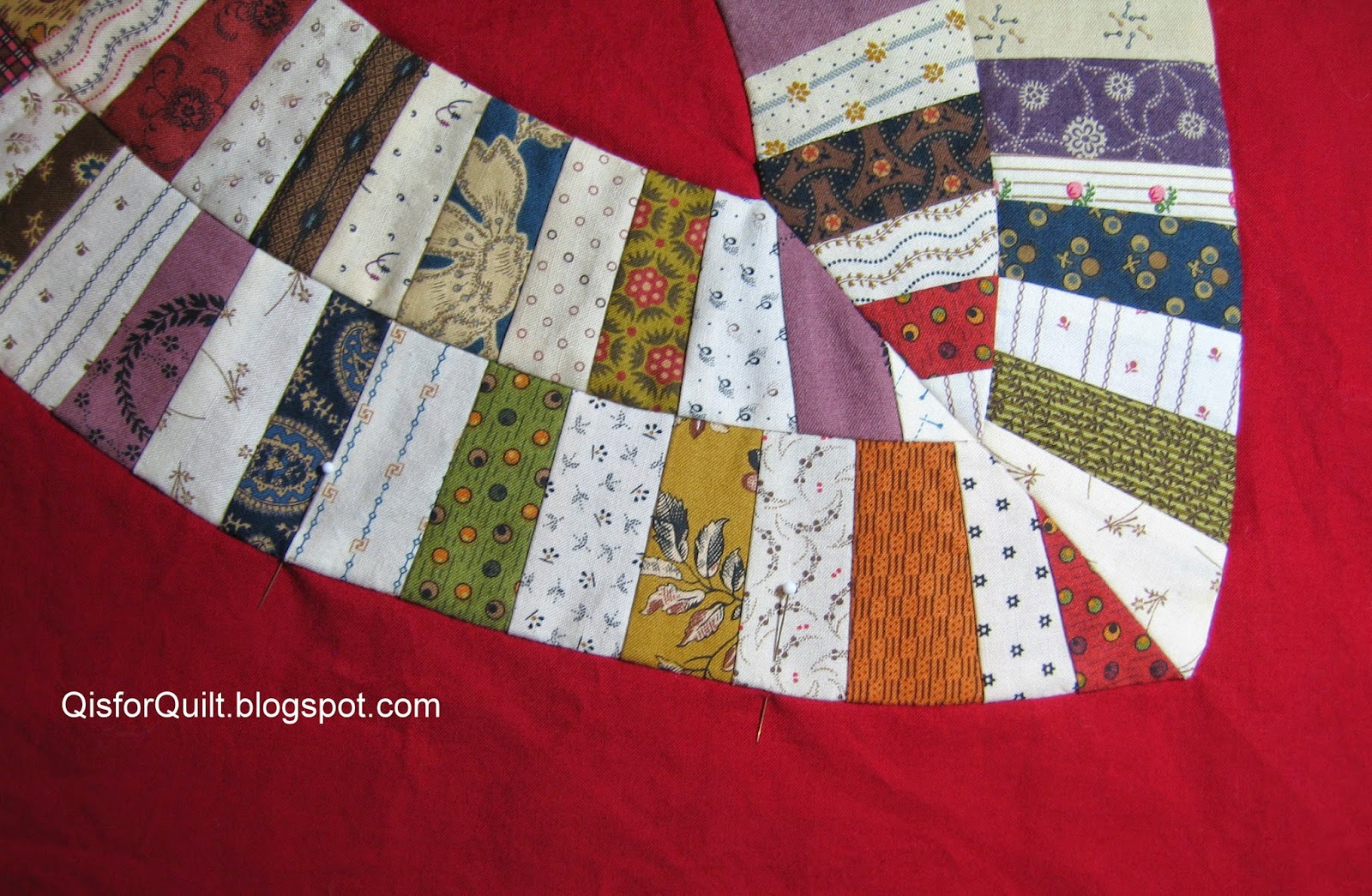 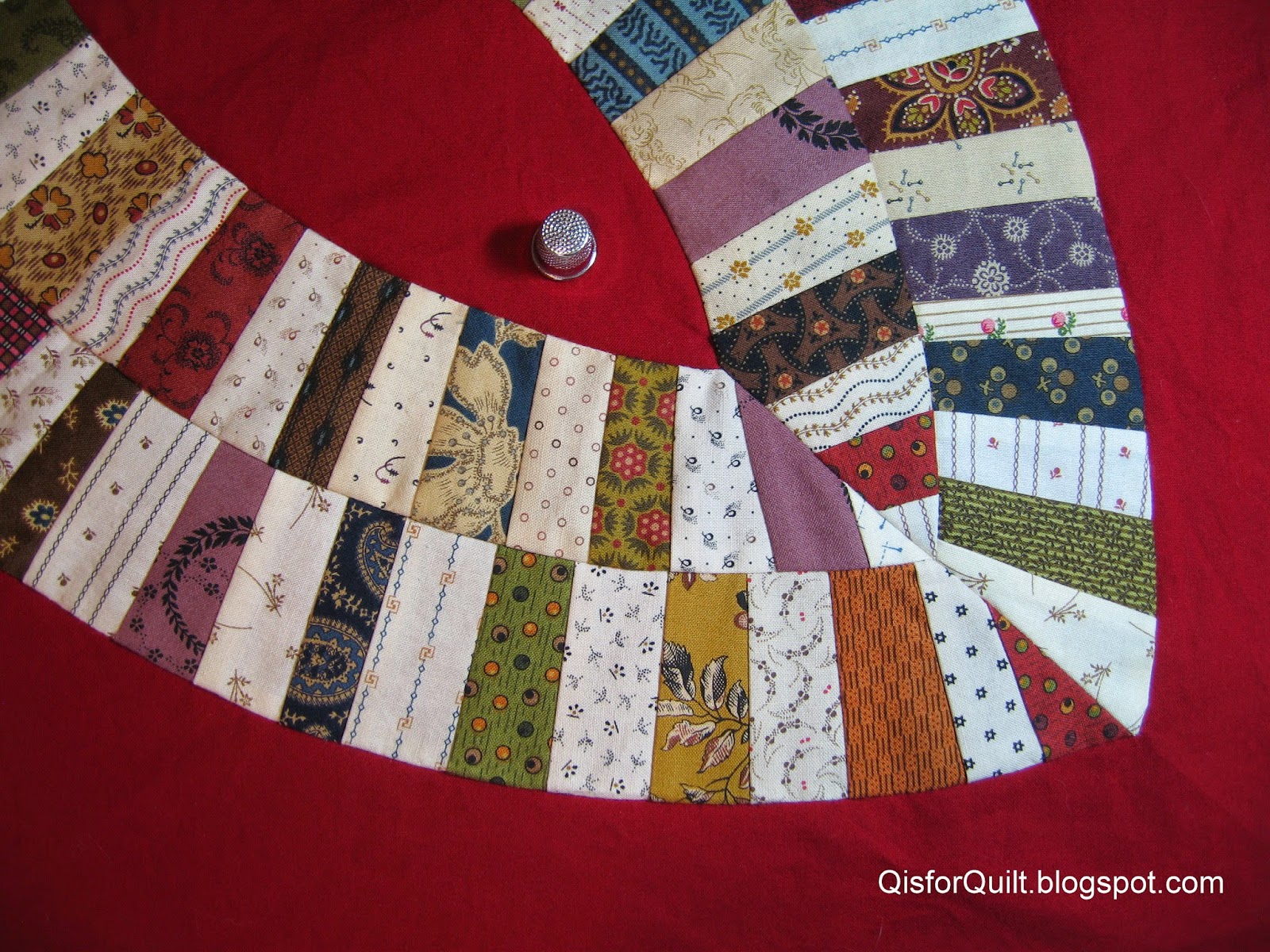 Do you see the flat spot between the two pins in the upper photo? The lower photo shows my fix. 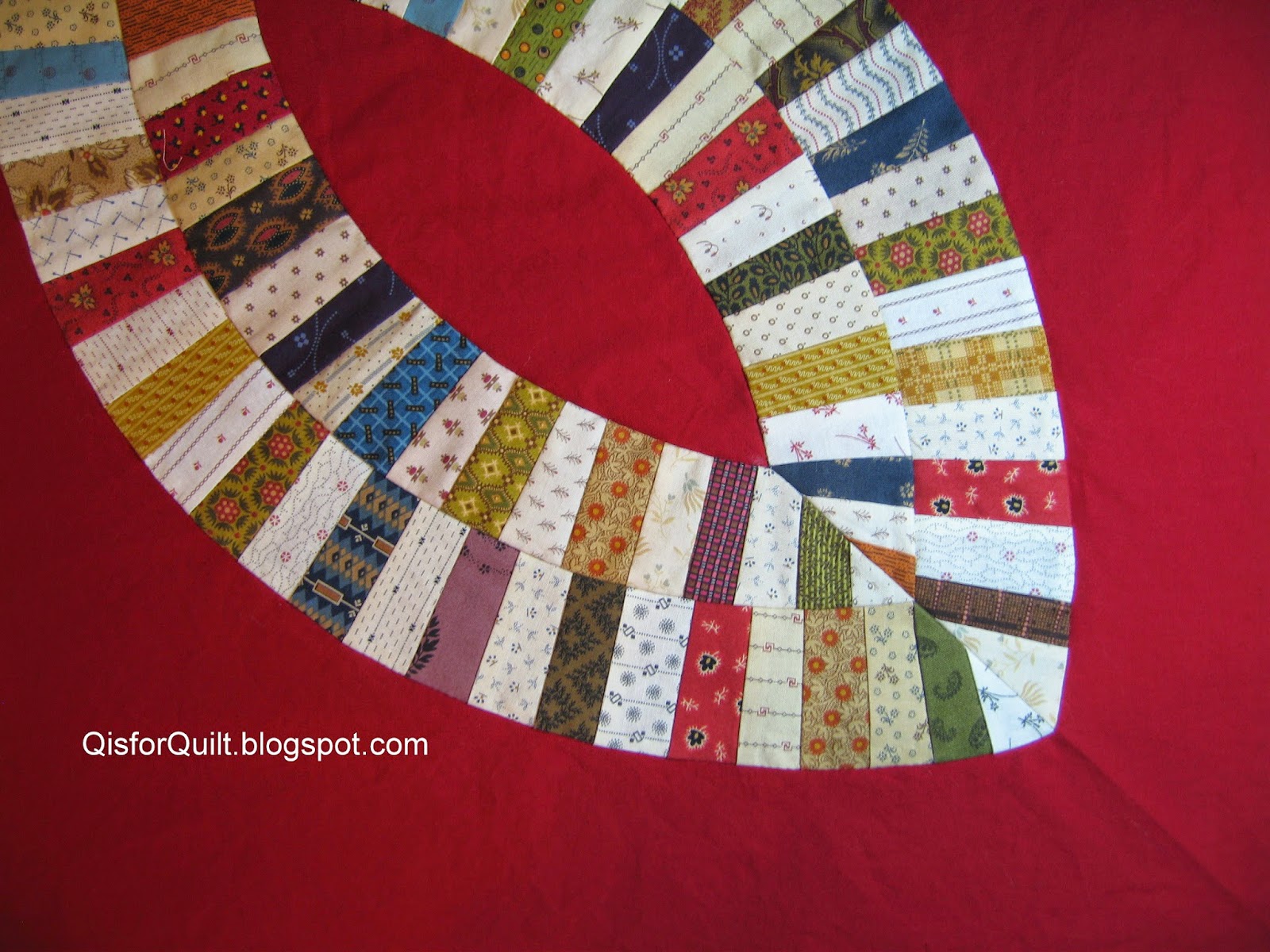 The white blotch on the lower tip really bothered me but it took me a week to decide I was going to fix it and how to do it. 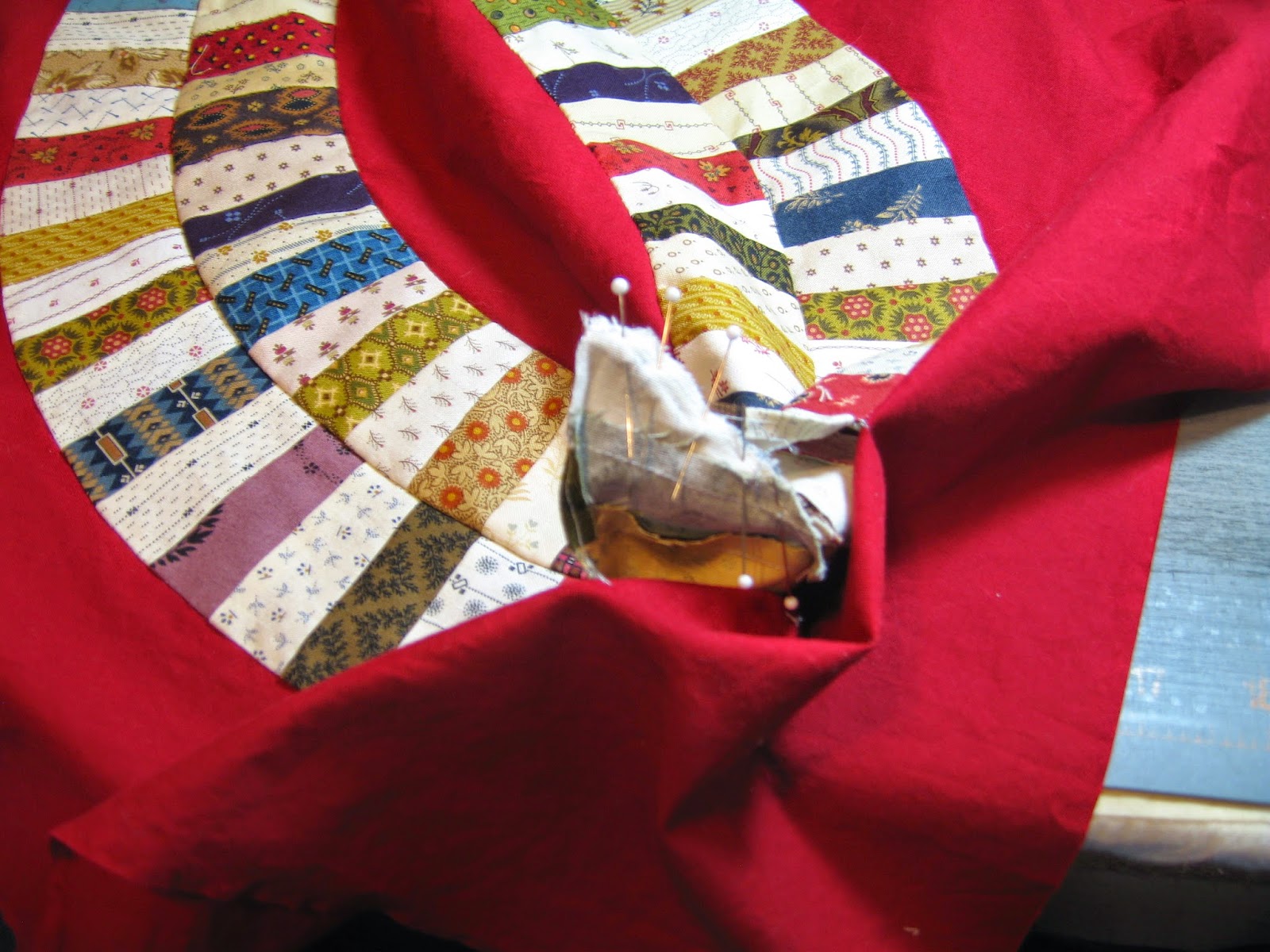 Undid my applique stitches, hand stitched a small piece of fabric onto one side of the tip, trimmed off the excess shirting fabric, hand stitched the seam and needle turned the edges under. 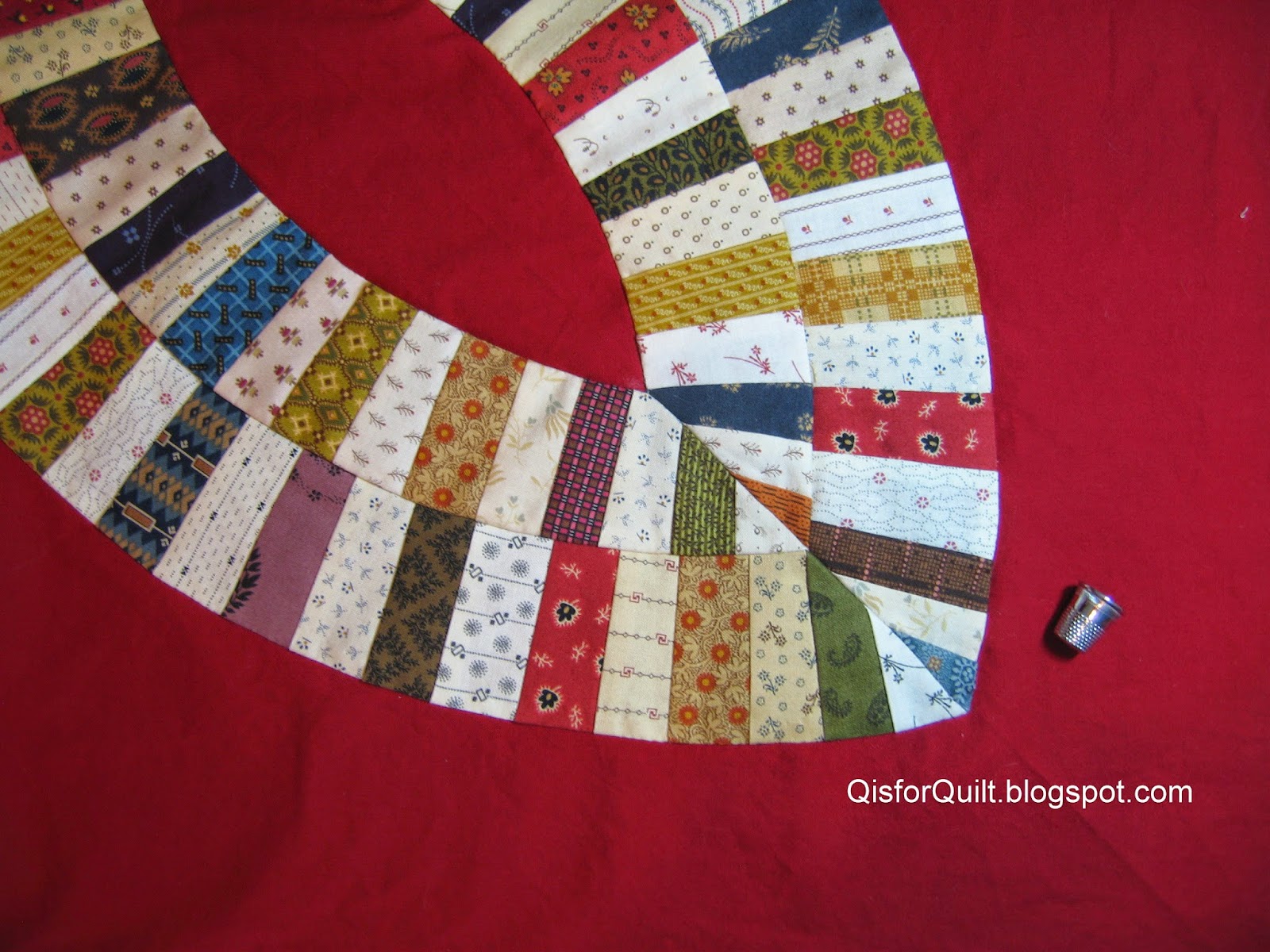 I can't say I'm totally satisfied with my fix but I'm fairly sure I'm not going to redo this one!

Until next time, Mayleen
Posted by Mayleen at 2:31 PM 7 comments:

Labels: Pumpkin Peel, Small Pieces Spectacular Quilts
Newer Posts Older Posts Home
Subscribe to: Posts (Atom)
When I stand before God at the end of my life, I would hope that I would not have a single bit of talent left, and could say, 'I used everything you gave me.'