A Return to Phebe 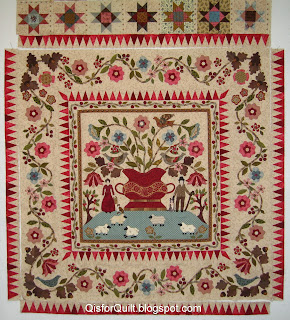 I left you last month with the news that Hospice had been called in to care for my mother. There were ups and downs but my mother passed away on August 26 without lingering and suffering. I was very thankful for that. This has been a year of endings for me - both my mother and mother-in-law passed away and a daughter left home to marry (not a bad thing but it is an ending).

As you can see, I'm still slowly working on Phebe. My goal to have her to the machine quilter by this time went out the window when my mother's health deteriorated. After the funeral, I really had no desire to work on Phebe and it has taken me some time to get back into quilting. To be truthful, there are still days I'd like to pack Phebe away. Instead, I'm planning to finish her in memory of my mother and mother-in-law neither of whom were quilters but were very supportive and encouraging of my projects. 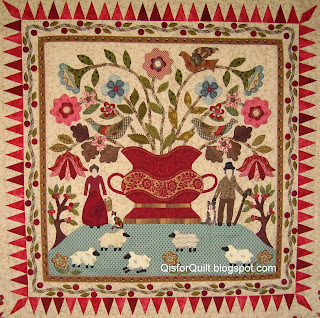 Ever since beginning Phebe, I've felt there was just too much space around Henry (Phebe's husband). So, I'm going to add a border collie. Perhaps someone can tell me if they are the traditional dog to herd sheep? What you see in the picture is Publisher clip art and not my appliqued dog yet. Then I thought, shouldn't Phebe have a cat? Yes! I've appliqued a calico cat sitting next to Phebe. Unfortunately, it looks like the cat is sitting on a sheep's head so I plan to move that sheep a little to the right.

OK, back to normal thinking. 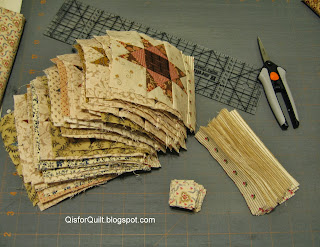 Besides the applique and embroidery going on in the center and borders, I've been fussy cutting and stitching the sashing and cornerstones to the Ohio Stars. I can tell you that I will be very glad when this part is done. Until now, I'd thought of myself as a fairly good piecer, no longer. What I have is Wonky Ohio Stars which are sewn to finished size 1/2" sashing and of course, I had to choose sashing fabric with lines. Any little stitching wobble and fudging is very evident.

This all brings me to what I'm trying to "say" with this quilt. I deviated from the pattern by making Phebe and Henry older, hopefully representing a life well lived, a full life. I don't know anything about their real lives but I imagine it was like ours today - good and bad, things to be happy about and disappointed with. Yes, I'm disappointed my piecing and applique isn't as good as it should be but it won't be so noticeable in the quilt when its all stitched together. Meanwhile, I'm enjoying (most of the time) the process!

Labels: Henry, Phebe
Newer Posts Older Posts Home
Subscribe to: Posts (Atom)
When I stand before God at the end of my life, I would hope that I would not have a single bit of talent left, and could say, 'I used everything you gave me.'