Applique or piecing?
Piecing or applique,
which do I like best?
The answer to that burning question:
I like whichever one I'm not doing on my current project!

Whenever I'm working on an applique project, I tell myself I really enjoy piecing more than applique. Then whenever I'm piecing, I think "Why in the world did I think I'm a good piecer?!?"

Why am I sharing this? Read on. 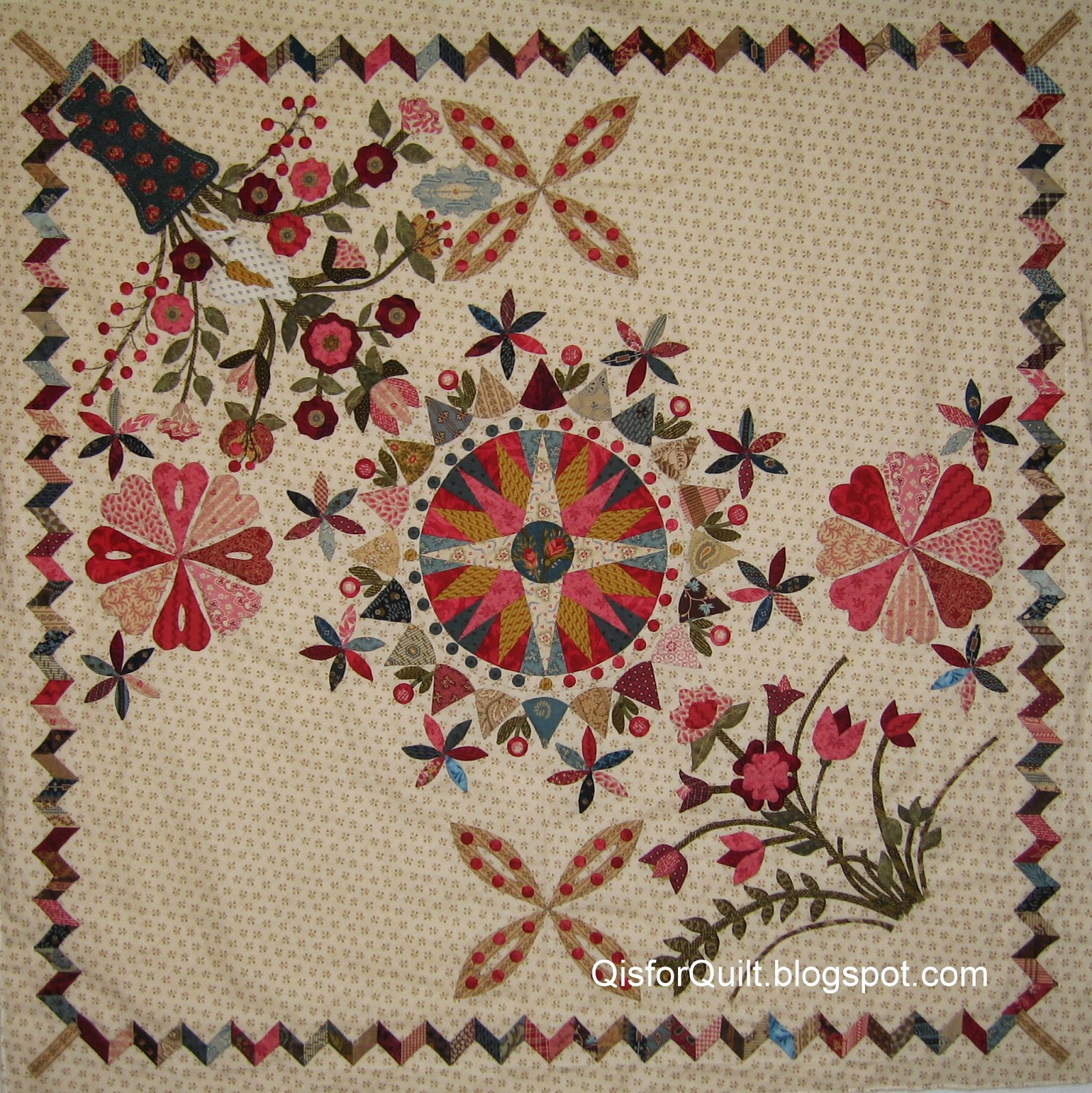 I've been struggling along with part 5 of Love Entwined (LE). I've added most of the flowers, some of the leaves and I'm auditioning fabrics for the fried egg shape. Look next to the center top flowers for the light blue. That's probably not supposed to be a fried egg shape but that's what I think of when I see it. I'm not so sure I like that blue fabric there but inspiration hasn't struck yet for an alternative.

Sometimes the number of color choices involved is really overwhelming to me. There are definitely days when I'm losing my excitement about this project but I plan to keep slowly stitching.

While I've been working on LE's applique, I've been thinking that I'd really like to piece something! 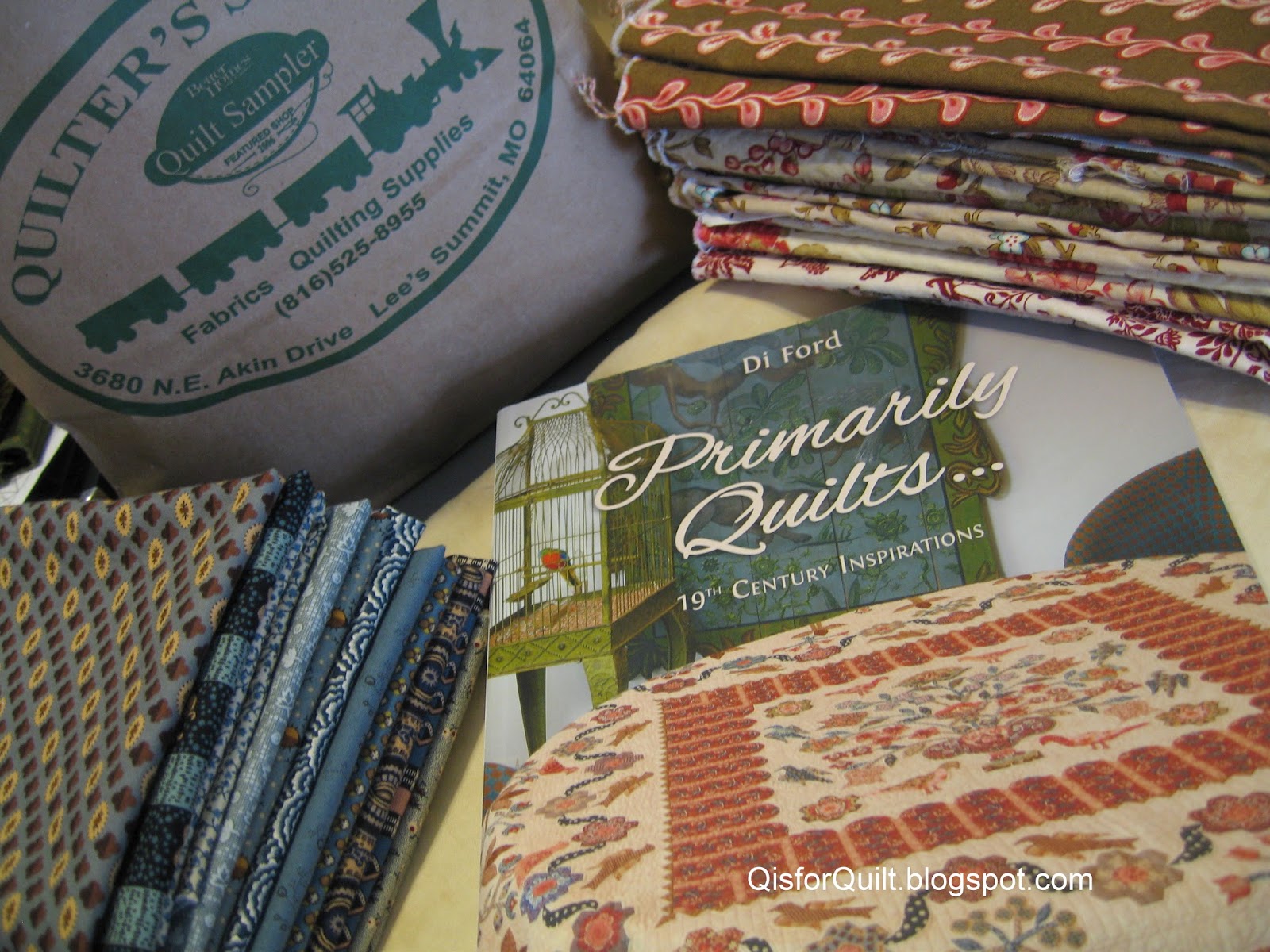 Remember this photo from my last post? I usually start new projects during stressful times in my life. Well, things are about to get more stressful (more on that another time) so I decided to make a preemptive strike and start a new project - Antique Wedding Sampler, designed by Di Ford and in her "Primarily Quilts" book. Phebe is also in this book. 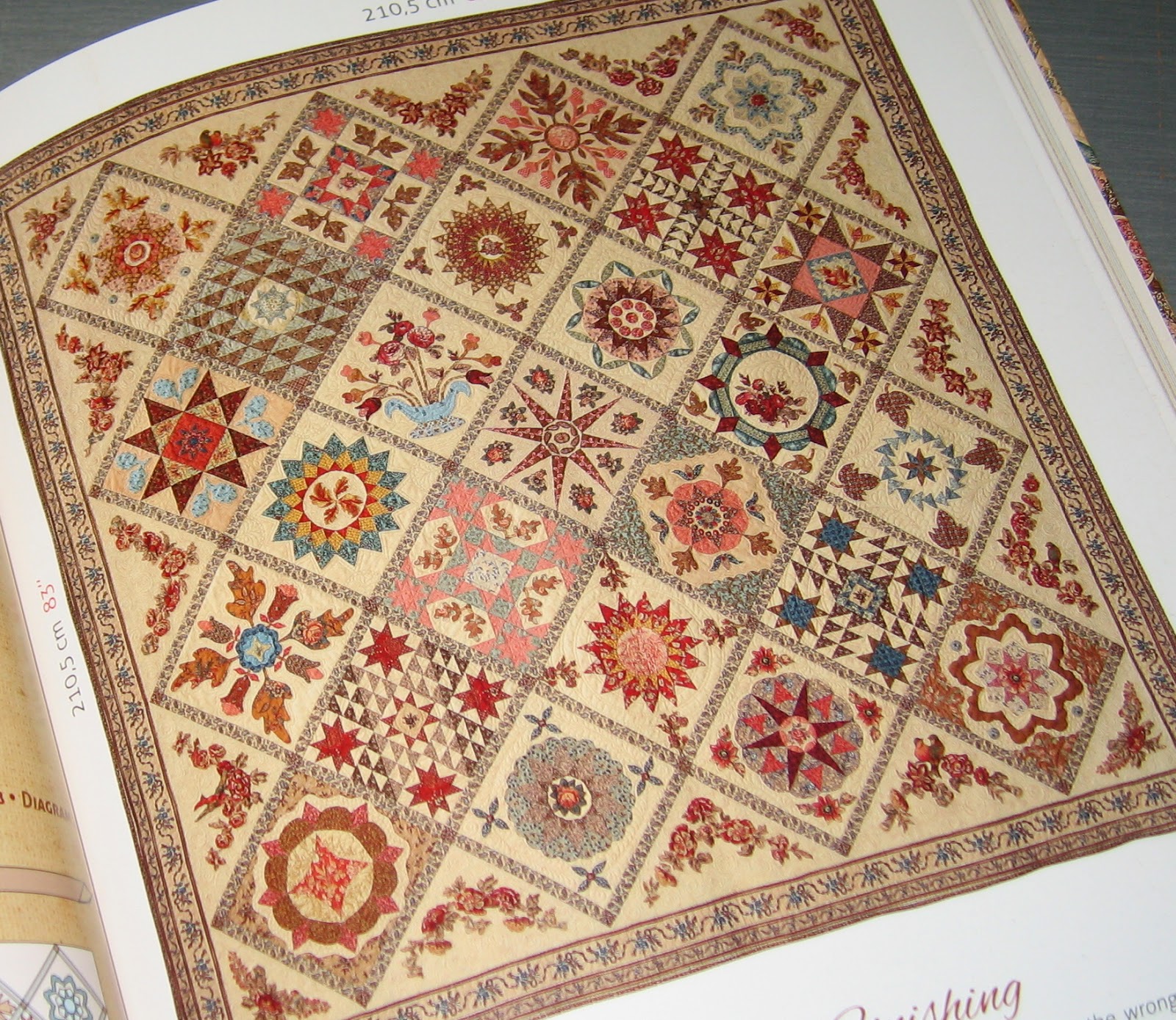 I've never made a traditional sampler quilt. In fact, this is the first sampler type quilt that I've been attracted to. So far, I've made three of the blocks and they are definitely challenging my skills. (Mostly a good thing!) Here they are with my comments. 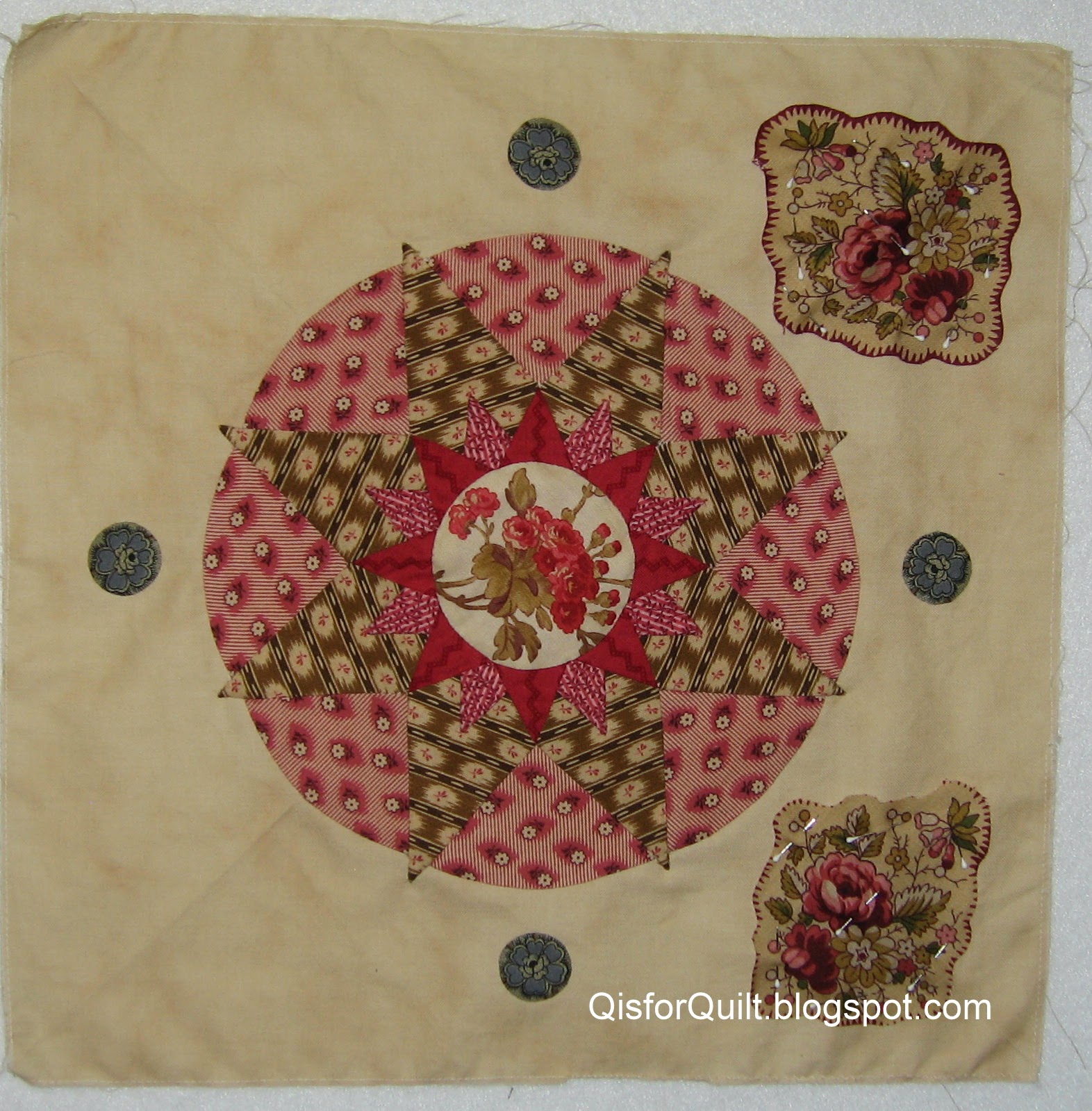 Block #1 - My unfinished problem child block. First of all, what was I thinking using those fabrics? The brown and pink fabrics are too much a like since both of them have similar cream ovals. Some people might simply redo this block in other fabrics but me? I actually made it twice and that was definitely enough. Unless, of course, I just can't stand it anymore and give in.

I tried hand piecing this star but it turned out really awful so I machine pieced most of another one. The light pink diamond shape of the interior star and the center circle were applique plus the entire finished star was appliqued to the background.

My other issue is the Broderie Perse - nothing seems right so I'm still looking through my fabric stash for possibilities. I'm finding I don't have many florals which will work. Any suggestions for fabric which might work?

This block has definitely been a learning experience. 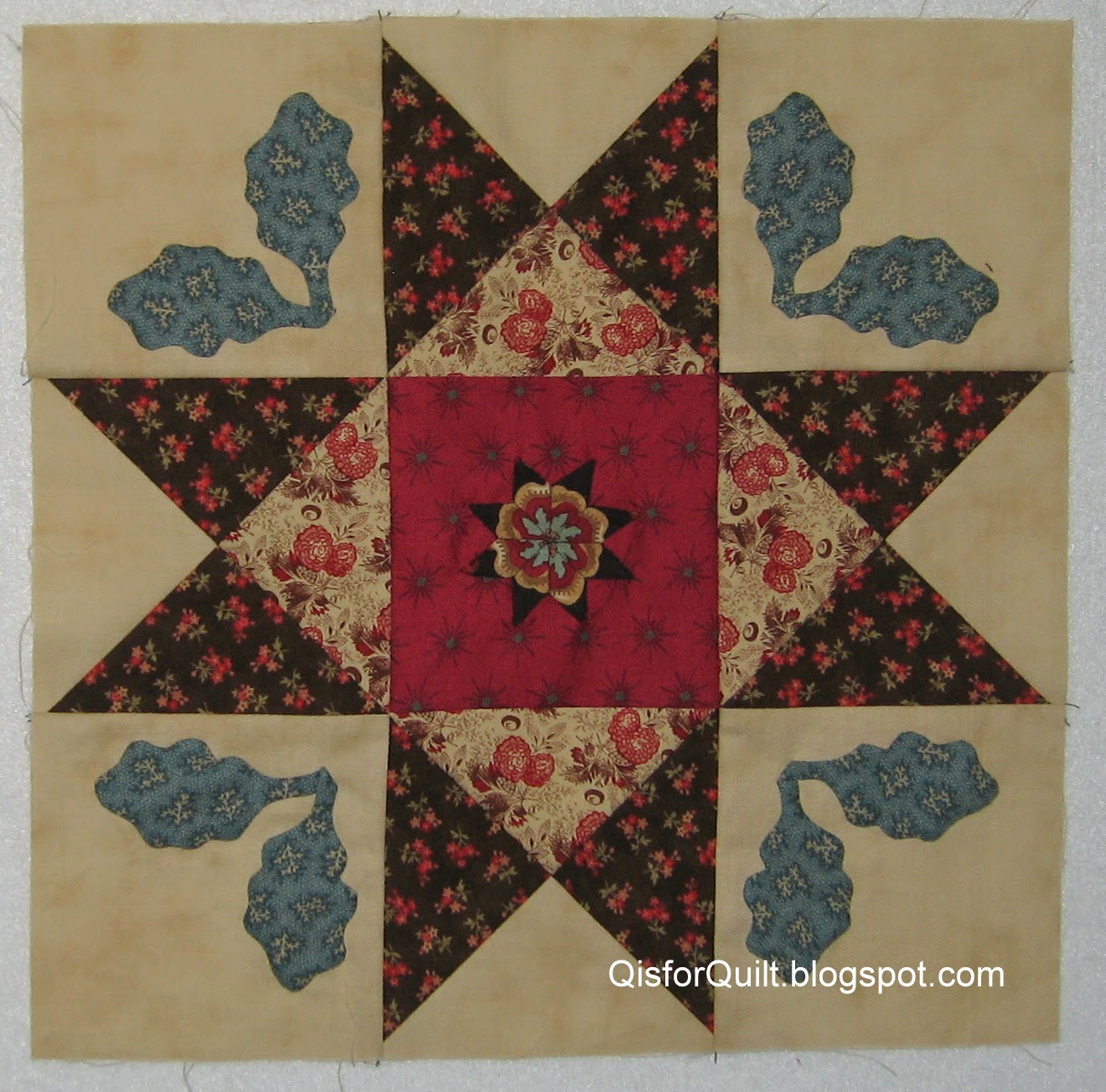 Block #2 - I was surprised how easily this block went together. I have been known to really mess up on triangles. As I look at it now, that center mini star may be wonky but doesn't appear so when the block is on point. 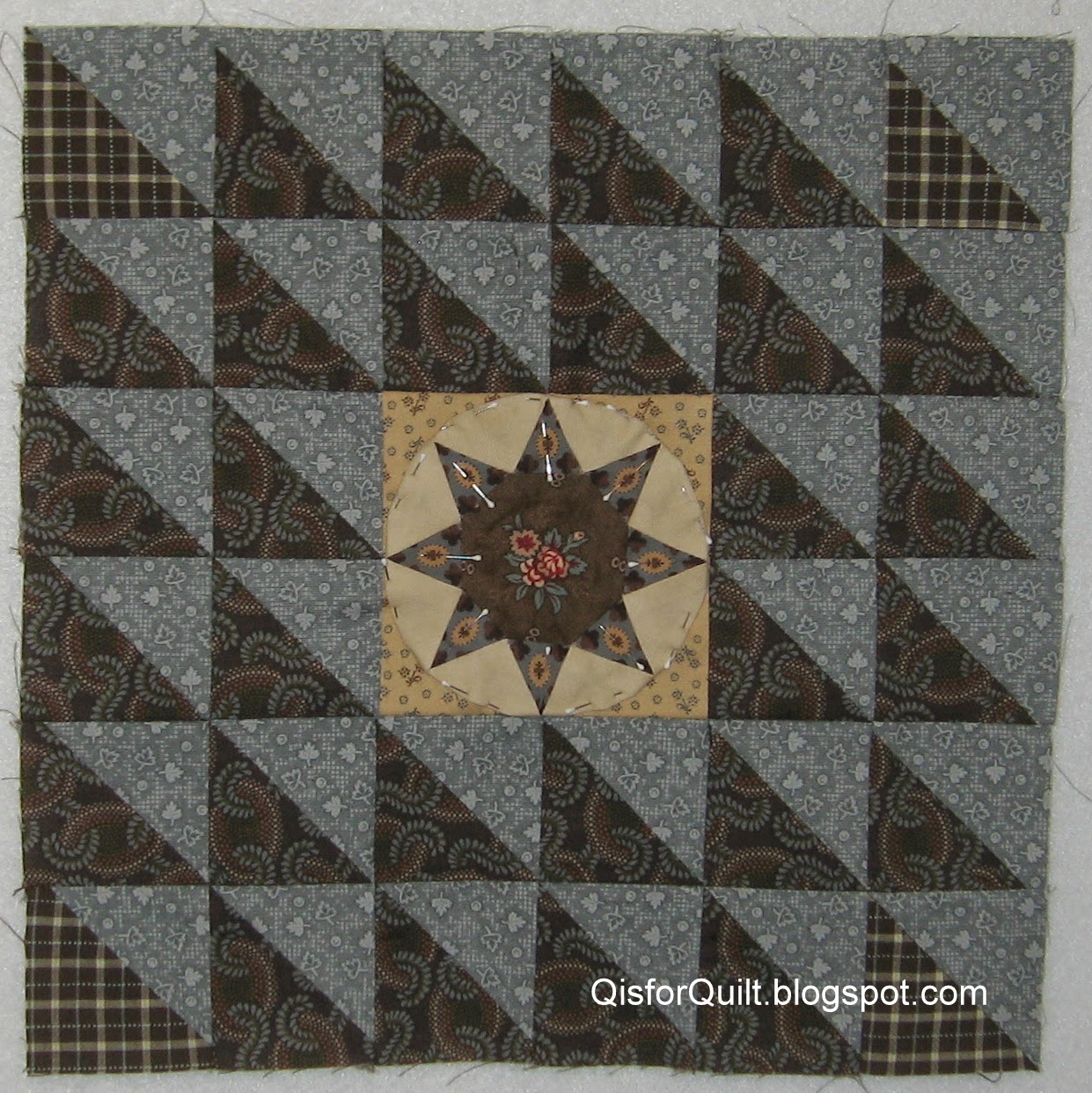 Block #3 - This block was difficult for me to make but not for the reason you might think! The colors are so subdued (brown, ugh) that I finally gave in and added some fussy cut fabric with color in the center.

I also learned I need to improve my template making skills. That center star was a bit difficult to machine piece and while I was working on it, I was thinking about the merits of hand applique projects, specifically my LE! I especially was thinking about that when I had to make a second star circle because the first turned out too large due to the inaccurate templates I'd made.

I still need to applique the star circle to the background so this block is unfinished also but not for long. At least, I'm not planning for it to be unfinished for long. 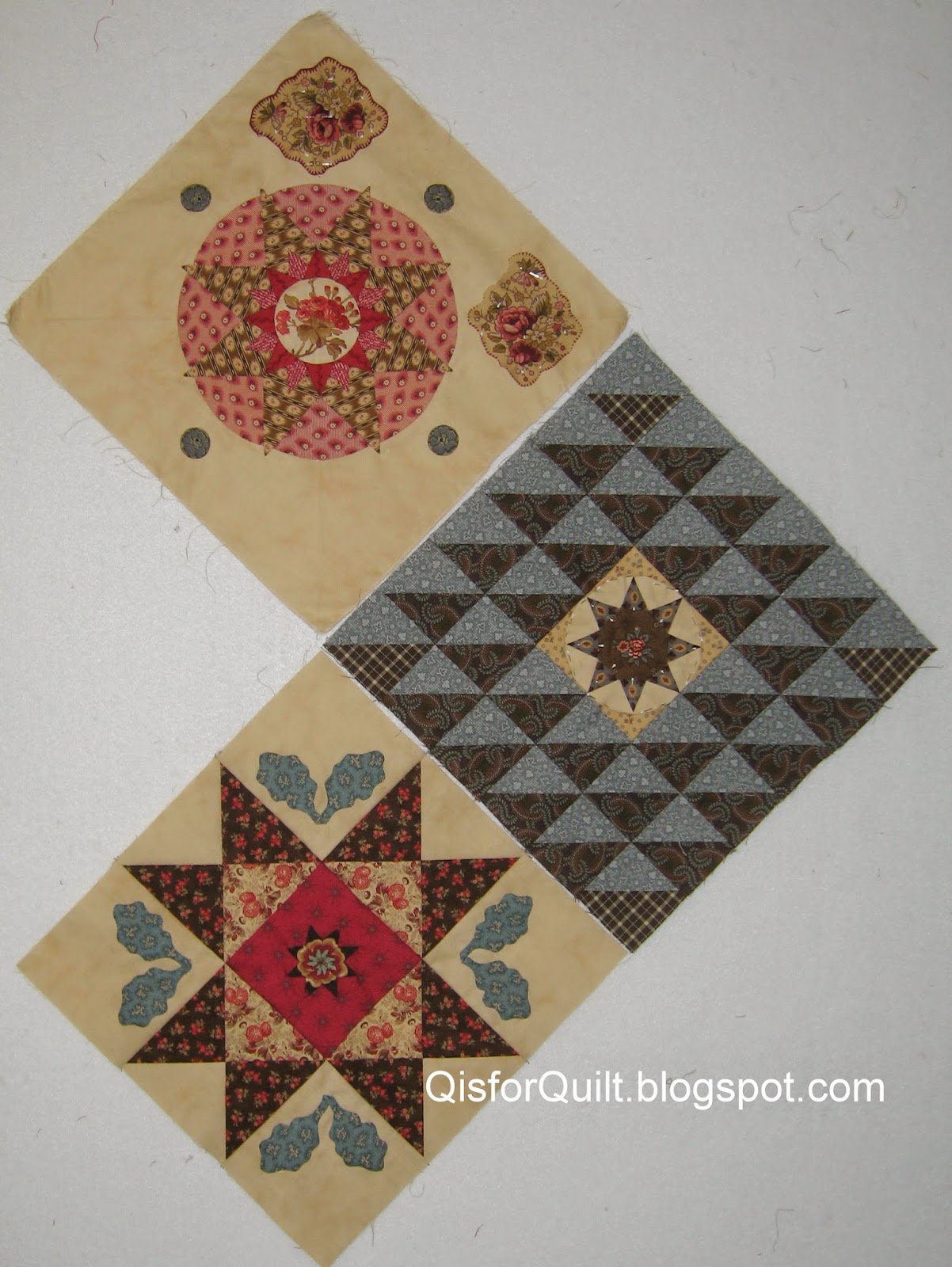 Here they are together in the order the pattern suggests.

Last night, I had the first quilting related dream I can ever remember having. I have no idea where I was but I was onstage trying to impress other quilters with my piecing skills. When I looked down at the block I'd made, it was a simple strip pieced block that was 12" square but was supposed to fit in a 10" square space. Uh, oh! Maybe I'll dream about applique tonight?!?
Posted by Mayleen at 4:53 PM 8 comments: 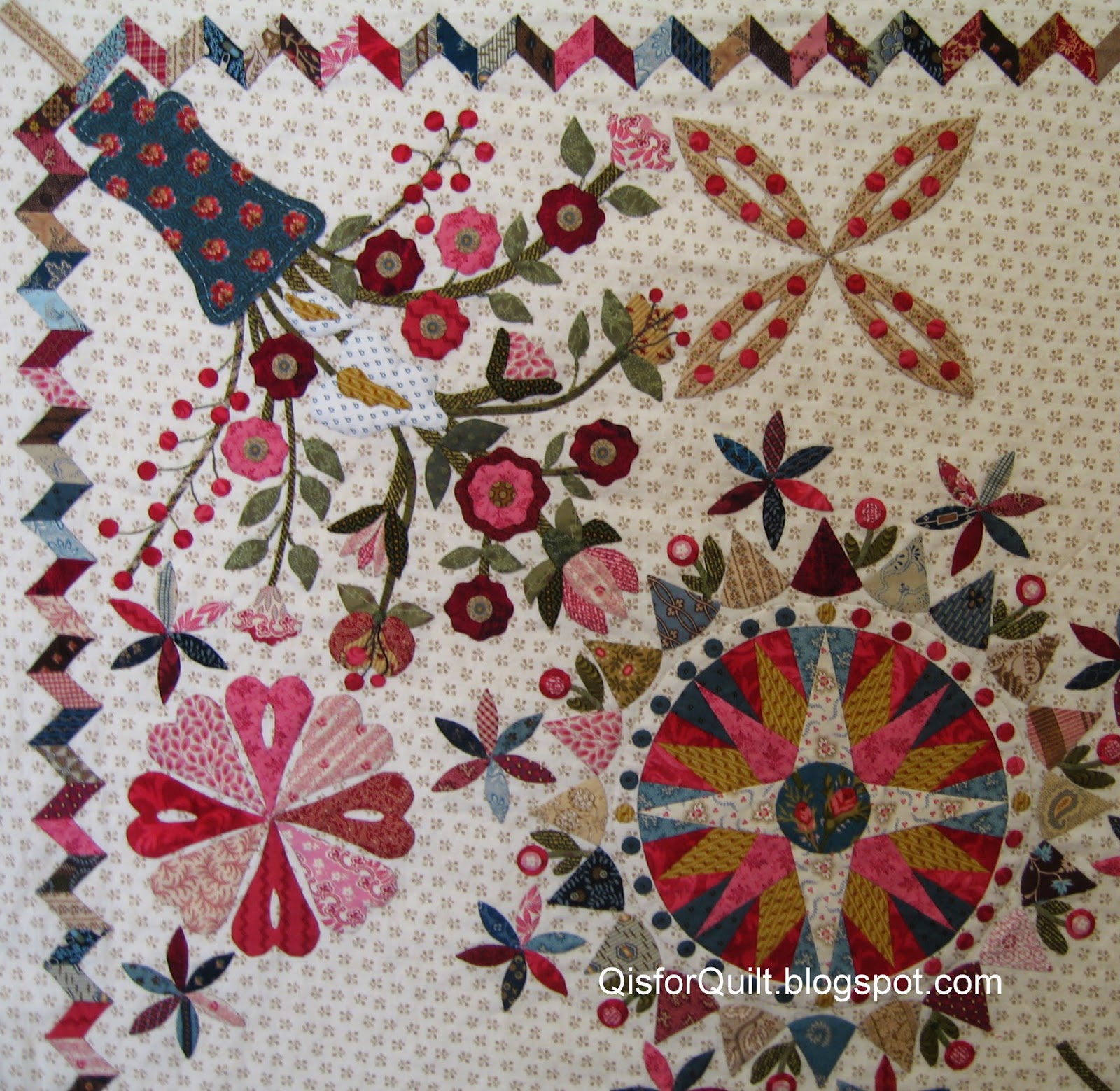 Update on LE Part 4 - Seems like every time I thought I'd added all the stems and leaves, there was one more I'd missed! I still need to applique the vase and the four hearts on either side of the vase. Of course, there are still bits and pieces to finish from Part 3. Sometimes catching up to the current Part 10 seems overwhelming but a little stitching here and a little there and I hope to get there! 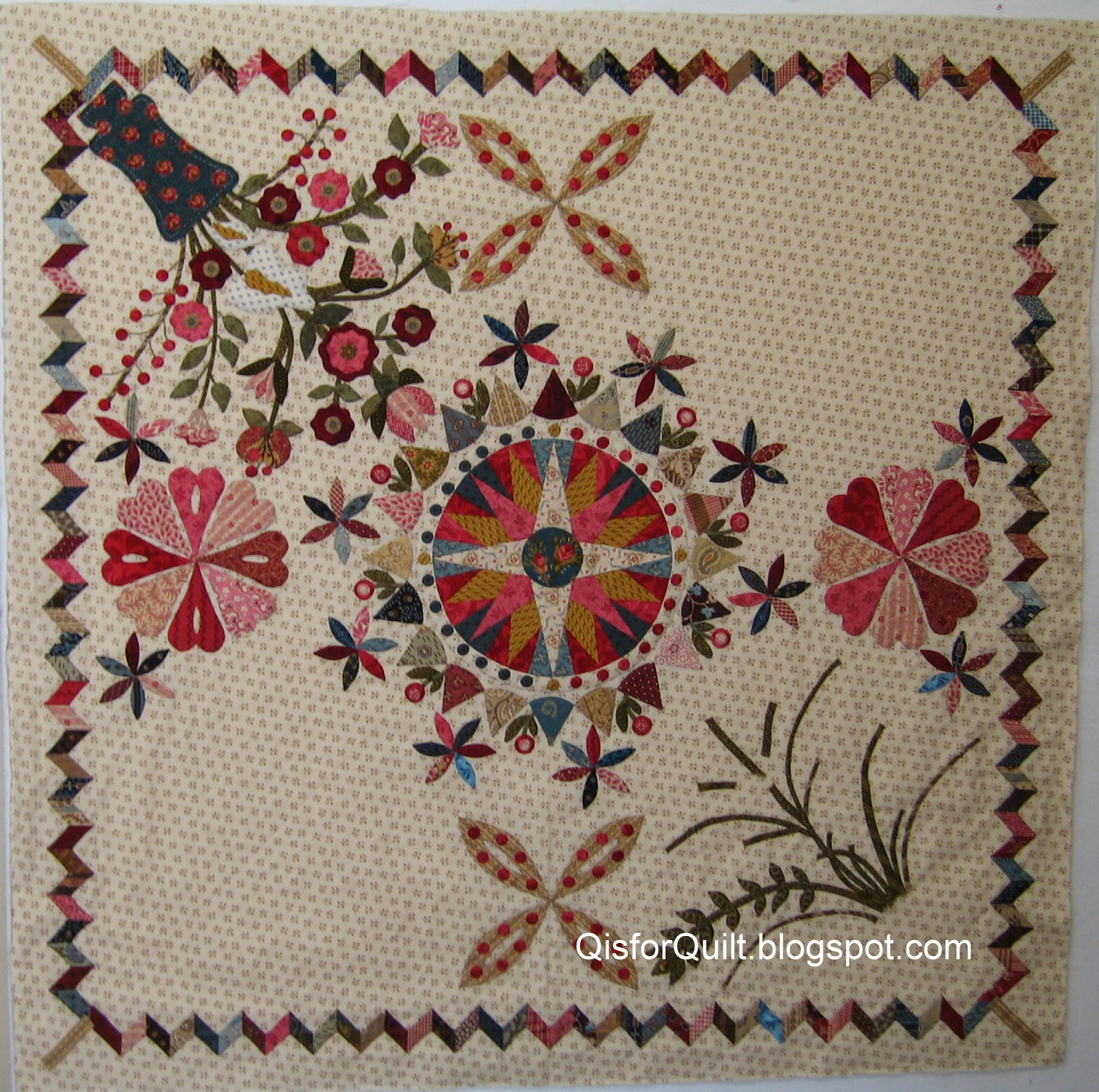 I'm really glad I made the stems and some of the leaves for Part 5 at the same time I did Part 4. For me, the flowers are the fun part! Just looking at the pattern, I'd say that Part 5 is not as detailed as Part 4 so maybe I can finish it before Part 11 is released.

And that is a big maybe since spring is here! For the past few days, I've been tidying up the flower beds and there seems to be more to do. Of course, the weeds are growing just as quickly as the flowers. It always amazes me how well weeds can grow in drought situations. I'm happy to say, though, that there are no weeds on my quilts!

Until next time,
Mayleen
Posted by Mayleen at 5:09 PM 5 comments:

Labels: LE, Love Entwined
Newer Posts Older Posts Home
Subscribe to: Posts (Atom)
When I stand before God at the end of my life, I would hope that I would not have a single bit of talent left, and could say, 'I used everything you gave me.'